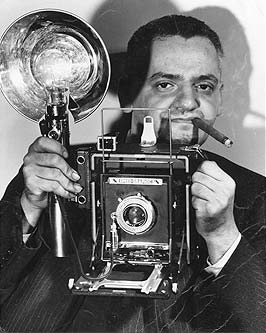 ‘To me, pictures are like blintzes – ya gotta get ’em while they’re hot’- Weegee

Usher Fellig, commonly known as Weegee, who was one of photography’s most influential photojournalists, known primarily for his tabloid photographs of New York crime scenes and urban grit. Weegee began his career with the photo agency Acme Newspictures in the mid 1920s. Remarkably in 1930, due to his shear conviction to photograph crime/accident scenes,  he became the first photographer to be granted a permit for a shortwave radio to listen to police and fire frequencies. Weegee worked as a freelancer in the 1930s and 1940s, armed with a police scanner installed in the back of his car. This later prompted the name ‘Weegee’ which derived from the popular board game (Weegie) as he would be able to arrive at the crime scenes ahead of the police arriving. This nickname comes from the phonetic spelling of the board game and refers that Fellig had a super natural intuition. No one was able to capture life and death in New York such as Weegee did.

WestLicht is presenting the first retrospective of Weegee’s work in Vienna, exhibiting approximately 250 original vintage prints by the photographer. In addition, WestLicht will present a selection of books, such as ‘Naked City’, Weegee’s first own publication, showing the variety of his collection. Published in 1945 and celebrated as a photographic sensation, the book has become the most important and influential photographic book in New York. Accompanying this candid retrospective, a catalogue entitled ‘Weegee The Famous‘ by Michèle and Michel Auer, which will be available at the WestLicht Bookshop (384 pages and over 400 illustrations).

His spectacular images were produced with a number of different cameras,  he gained his fame by using the famously known press camera, 4×5 inch Graflex, Speed Graphic camera, which was preset at f/16, at 1/200 of a second with flashbulbs and a set focus distance of ten feet. Not only did he capture fascinating scenes but the images gave inspiration to many famous artists, such as Stanley Kubrick, Diane Arbus and Andy Warhol. Timeless images that act as a very important historical document in the genre of street photography.

The exhibition is shown in co-operation with Auer Photo Foundation, Hermance, Switzerland.

Below are some of the images that will be shown at the exhibition and a recording of Weegee speaking about his career, as well as giving advice to other budding news photographers.