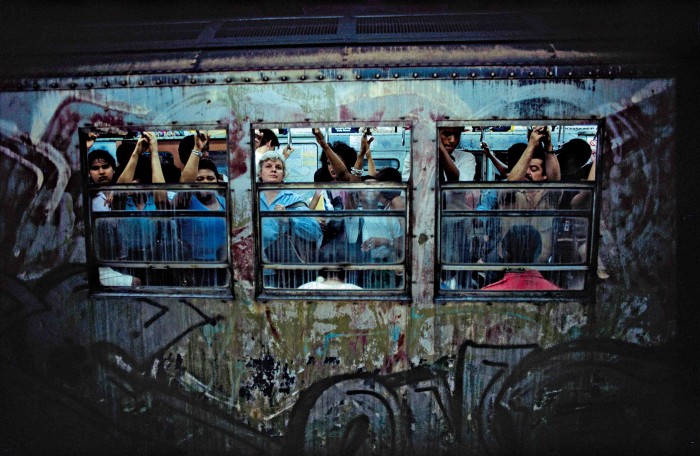 Bruce Davidson’s Subway book is a well known series of amazing colour photographs from the 1980’s in the New York City subway system. Davidson started the project in the spring of 1980. Before he started the project he was working on commissioned projects and writing and producing a film based on the novel called Enemies: A Love Story by Isaac Bashevis Singer, but once the film fell through Davidson decided to return to still photography which he calls ‘my roots’. The book was first published in 1986 and still remains as a one of a kind collection of photographs that shows New York’s subway at its lowest point. We think that it was a very brave project to start work on and Davidson’s dedication to his subway project allowed him to make probably the largest collection of photographs in the New York subway from that time. This large collection of photographs allows him to select a series of images that paints the most vivid picture of what it was like riding the subway in the 1980s.

Deciding to do a project on the New York subway system in the 1980s was a very dangerous project, because the subway was known to have a very high crime rate at that time. In Davidson’s pre word to the book he says ‘a day didn’t go by without the newspapers reporting another hideous subway crime’. So he knew he had to be prepared to work in such conditions, Davidson started a military fitness exercise program, a crash diet and would jog every morning. This was because he knew he had to be physically prepared to be able to carry all his camera equipment on the subway all day. He also carried bandages, money for the pay phone and a swiss army knife incase anything happened to him while down there.

At first Davidson used black and white but soon after starting he decided to switch to colour film because he ‘began to see a diminution of meaning that demanded a colour consciousness’. He began exploring on all the different lines in all the different areas of New York, just riding the subway around to new places with no particular plan most of the time. He would carry around a small portfolio of other photos he had taken on the subway which he would show people to help him get the photograph he wanted and he would try to always send the subject a print. This was difficult for Davidson because often he would mix up the addresses of the subjects to the photos or not be able to read the persons handwriting. For example he once sent a photograph of a Latino couple to an Orthodox rabbi, the rabbi later returned the photograph of the Latino couple with a note saying “I am sorry this is not my picture. I am a rabbi with a beard, not a Puerto Rican couple half undressed”.

After becoming a victim of a mugging while riding the subway one day, the muggers had held a knife to Davidson’s neck and taken his camera. He reported it to the police and was asked by New York Magazine to photograph the police decoy unit working on the subway. The idea being that there were two undercover police officers on the train and Davidson and another decoy would be sitting another part of the carriage so when the muggers tried to steal Davidson’s camera the police were there straight away. This is how Davidson took the well known photograph of a man holding a gun to another mans head. The man with the gun was an undercover police officer and the man with the gun to his head was a mugger who was trying to snatch Davidson’s camera.

Once at three in the morning when Davidson was riding the subway around a woman boarded the train carriage that he was sitting in. The middle aged woman proceeded to take out of a paper bag some “soiled articles of underclothing, a hot towel, a pair of worn shoes, and a wine bottle and placed them in the middle of the train floor. Onto them she poured cornflakes, then crushed ripe strawberries between her fingers and dipped that into the breakfast cereal”. Davidson then spoke to the woman about taking her photograph thats when she stood up and lifted up her dress and Davidson’s flash went off. This unfortunately alerted a group of three teenagers that there was a camera nearby, they ran onto the train saw the mess on the floor and the woman and got straight off the train. This is just another example of the stories that Davidson has from shooting this project, but you’ll have to buy the book to see the photograph.

The book is full of amazing stories from Bruce Davidson’s subway experience as well as incredible photographs that really give the feeling of riding the subway in the 1980s. Davidson photographed it all from the packed rush hour trains to the empty night trains to the people of the city and combining it all into the finest collection of photographs from New York’s subway system. We would advise anyone who likes the photographs below to go and buy the book as it is full of all different kinds of photographs, it will amaze you.