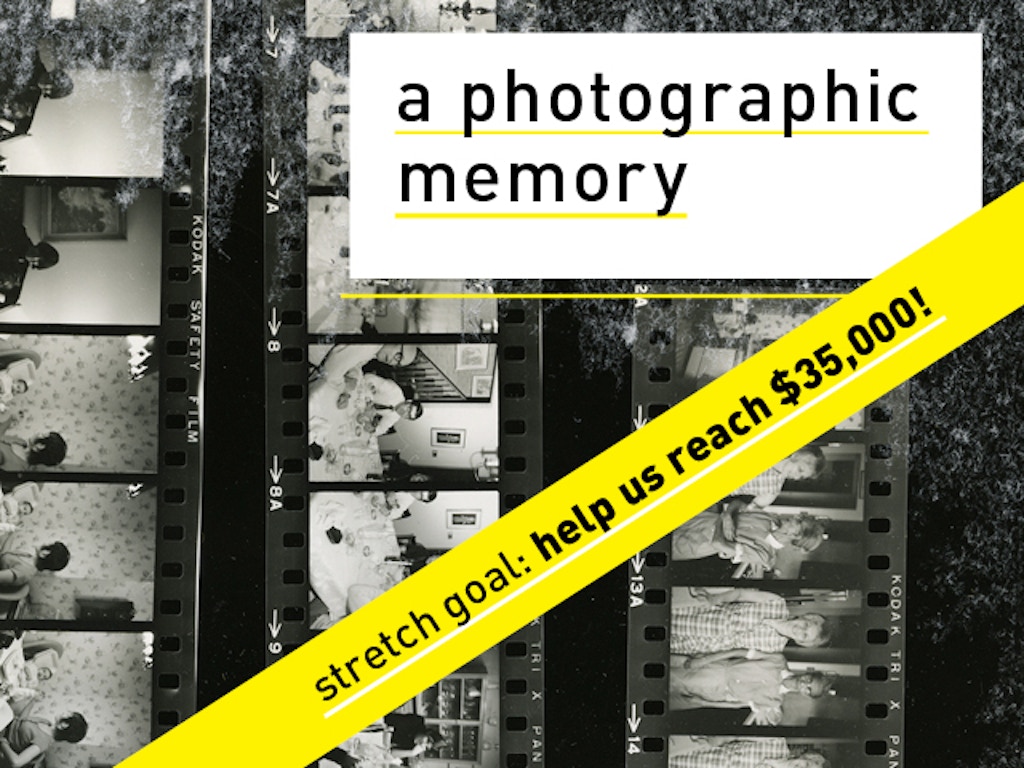 A personal documentary film about a daughter's search for the mother she never knew through their shared love of photography. Read more

This project was successfully funded on July 3, 2013.

A personal documentary film about a daughter's search for the mother she never knew through their shared love of photography.

Filmmaking is expensive! Our total budget is currently near $200,000, but may be higher depending on rights and usage costs. If we raise more than our goal, we can not only FINISH SHOOTING the film; we can start post production! We very much appreciate your support!

This project began when I uncovered some boxes of short films at my dad's house about the photographic icons Henri Cartier-Bresson, Bruce Davidson, Cornell Capa, Lisette Model, W. Eugene Smith, William Albert Allard, Don McCullin, and others. My mother, Sheila Turner-Seed had directed and edited the films in the early '70s. Since she died so long ago, I thought maybe I could learn more about her life if I retraced their origins.

I discovered that her raw interviews had been sitting like a time capsule at the International Center of Photography since 1979 when my dad sent them there for safekeeping. This led me to start A Photographic Memory, a film celebrating my mother's life and work, as well as ICP founder Cornell Capa's vision for photography.

In A Photographic Memory, I go on a journey to learn – through our shared profession – about the mother I never knew but whom I so desperately need to know. My mother, Sheila, was an ambitious New York and London-based writer, editor and producer who died suddenly in 1979. I was 18 months old and she had completed, a few years earlier, a series of award-winning film programs about influential photographers that were co-produced by International Center of Photography founder Cornell Capa and Scholastic. After revisiting these photographers in New York, France and England or, if deceased, their closest associations, I am blending my mother’s 1970s interviews with my own footage, creating a posthumous mother-daughter collaboration that connects me to my mother while re-examining the course of the careers of some of the most influential photographers in the history of the medium.

WHERE WE'RE AT + WHAT WE NEED

Thanks to a generous donation from Richard Robinson and Scholastic in summer 2011, A Photographic Memory got off the ground and now is about ¾ of the way through production. We've traveled to France and around the US to interview key people, but now we need to raise at least $25,000 to complete shooting and begin editing this year. We still have several shoots to do: I will interview four contemporary photographers, as well as my mother's best friend in Alaska, who had a long conversation with her the day before she died and who remembers all of it. Funds will pay our film crew consisting of Director (me), DP (Daniel Traub), Sound PA (Mark Maloof), Editor (TBD) and production assistants. In the event we overfund we will be able to continue to pay an editor to get closer to a final cut, as well as get further along in the post-production process. Editing and post-production are the most costly and arguably important part in the filmmaking process, and our total budget is nearly $200,000. Your generous support will enable us to get closer to this project’s completion. We can't thank you enough for your donation, and we'd love your help spreading the word via Facebook, Twitter, blogs and email!

Here's a sneak peak at some of the perks available at the different levels of contribution. This does not show all rewards: as images become available they will be added. Enjoy!

Special thanks to the team who is helping this come together:

Dick Robinson and Scholastic for their generous support to get this project off the ground! We can't thank them enough.

As with any large scale film project, the road is filled with unforeseen challenges to be overcome. Potential challenges for this project include securing interviews with all of the photographers, family members and friends desired to complete the film, and then traveling to their locations to complete the shoots. These shoots require lots of research, planning and cooperation by all parties involved and occasionally there may be production delays due to unpredicted events.

If this project is successfully funded, we will be able to complete production. However, we will still be fundraising to complete post-production, which often takes longer (and costs more) than expected. With this in mind, our loose deadline to complete the film is December 2014, however this is subject to change based on the time and resources needed to pull it off. We will apply for film festivals and grants within the next year to make sure we finish what we started!

Learn about accountability on Kickstarter

Have a question? If the info above doesn't help, you can ask the project creator directly.

Ask a question
Report this project to Kickstarter