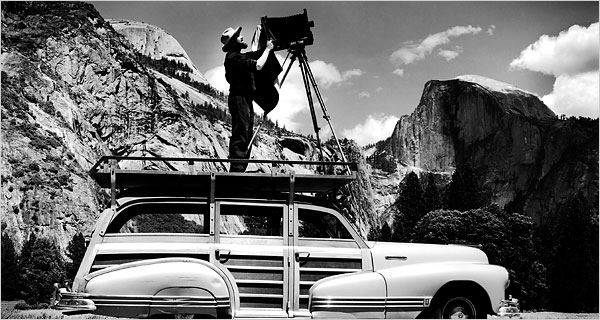 Ansel Adams – the photographer who changed the way American’s saw there continent.

In 1916, young Ansel Adams first encountered the stunning beauty of Yosemite Valley. From his first view of the valley he wrote, “The splendor of Yosemite burst upon us and it was glorious… One wonder after another descended upon us… There was light everywhere… A new era began for me”. During that stay his father gave him his first camera, a Kodak Brownie box Camera, and he took his first photographs with it in his “usual hyperactive enthusiasm”.  The following year Ansel retuned to Yosemite on his own with better cameras and a tripod, from then on he was hooked to photography. This youthful awakening began a lifelong journey for Adams – a quest in which he would discover the power of photography. His work was part of an extraordinary revolution in photography that sought to capture what Adams called “the continuous beauty of things that are”. More than any other artist of the twentieth century, Adams helped transform the meaning of wilderness in America; his greatest images of the American West changed forever what Americans thought about their own land.

Early on, Adams found himself caught between his hopes of becoming a concert pianist and his great passion – exploring and photographing the Sierra Nevada. But Adams’s life came to a dramatic turning point in 1927 when he made his famous photograph called Monolith, the Face of Half Dome – a view of Half Dome taken after an arduous day of climbing and shooting, on his very last photographic plate. This image was a breakthrough “It was a picture that for Ansel came to represent a moment when he had made a great leap forward,” says John Szarkowski, director emeritus of the Museum of Modern Art’s department of photography and author of Ansel Adams at 100.

Between 1929 and 1942, Adams’s work matured and he became more established. In the course of his 60-year career, the 1930s were a particularly productive and experimental time. Adams expanded his works, focusing on detailed close-ups as well as large forms from mountains to factories. During the 1930’s in New Mexico, Adams was introduced to notables from Stieglitz’s circle, including painter Georgia O’Keeffe, artist John Martin, and photographer Paul Strand, all of whom created famous works during their stays in the Southwest. Adams’s talkative, high-spirited nature combined with his excellent piano playing made him a hit. Strand especially proved influential, sharing secrets of his technique with Adams, and finally convincing Adams to pursue photography with all his talent and energy. One of Strand’s suggestions which Adams immediately adopted was to use glossy paper rather than matte to intensify tonal values.

In 1932, Adams had a group show at the M.H. de Young Museum with Imogen Cunningham and Edward Weston, which they soon formed Group f/64, which exposed “pure or straight photography” over pictorialism (f/64 being a very small aperture setting that gives great depth of field). The group’s manifesto stated that “Pure photography is defined as possessing no qualities of technique, composition or idea, derivative of any other art form.” In reality, “pure photography” did borrow from some of the established principles of painting, especially compositional balance and perspective, and some manipulation of subject and effect. By these standards, not only were “soft focus” lenses prohibited but Adams’s earlier photo Monolith, which used a strong red filter to create a black sky, would have been considered unacceptable.

Further more, Adams with Fred Archer, pioneered the Zone System, a technique for translating perceived light into specific densities on negatives and paper, giving photographers better control over finished photographs. Adams also advocated the idea of visualization (which he often called “previsualization”, though he later acknowledged that term to be a redundancy) whereby the final image is “seen” in the mind’s eye before taking the photo, toward the goal of achieving all together the aesthetic, intellectual, spiritual, and mechanical effects desired. He taught these and other techniques to thousands of amateur photographers through his publications and his workshops. His many books about photography, including the Morgan & Morgan Basic Photo Series (The Camera, The Negative, The Print, Natural Light Photography, and Artificial Light Photography) have become classics in the field.

In his later years, Adams was one of the most recognized photographers in the world. The precision and depth with which he captured nature’s beauty excited people’s imaginations and triggered a popular response that few other photographers have known. In those years, he took advantage of his popularity and redoubled his efforts to raise public awareness of the wilderness.

Here below are two documentaries, the first four parts being a BBC series called ‘Master Photographers’ showing a close insight into what Adam does best. Underneath that is a 90 minute video by PBS American Experience about Ansel Adams and the way he captured landscapes like no other. Produced by Ric Burns, who seeks to explore the meaning and legacy of Adam’s life and work. The documentary weaves together archival footage, photographic images, dramatic readings of the artist’s own writing, and interviews with leading photographers, historians, curators, naturalists, as well as Adams’s family, friends, and colleagues, to tell the story of a man who was a visionary photographer, a pioneer in photographic technique, and passionate environmentalism.