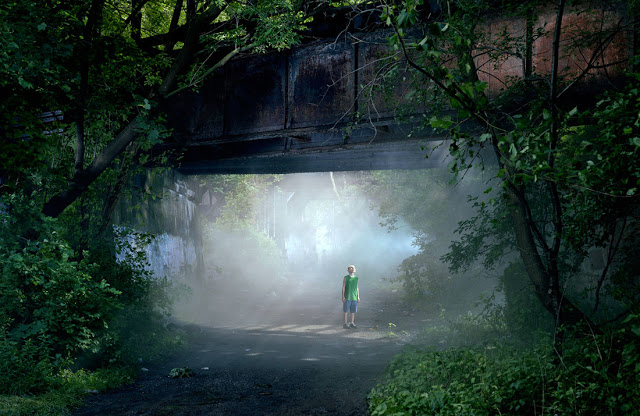 “I think my pictures are really about a kind of tension between my need to make a perfect picture and the impossibility of doing so. Something always fails, there’s always a problem, and photography fails in a certain sense… This is what drives you to the next picture.”

It is difficult to sum up the strange and magical quality that Gregory Crewdson creates so seamlessly in every photograph. He composes, with the help of a large team, perfectly and carefully calcutlated, dreamlike elaborate scenes, that look like they have been snapped out of a movie. Mostly his work has been shot in American towns of homes and neighbours that creates such eye catching and yet haunting scenes, that you can’t help that wonder what is the story behind these mysterious photographs.

The documentary Gregory Crewdson: Brief Encounters is a beautiful and contemplative look at Crewdson’s extensive process in capturing that single moment. The 90 minute documentary focuses on when he was working on Beneath the Roses, a multiyear project that brought film crews of sixty or so people to small towns in the Berkshires of Massachusetts to help produce his large-format photographs.

The documentary, a ten-years-in-the-making work directed by Ben Shapiro, is an intimate look inside Crewdson’s artistic process. While the photographs are staged with crews that rival many feature film productions, Crewdson draws inspiration as much from his own dreams and fantasies as the worlds of Alfred Hitchcock, David Lynch, Edward Hopper and Diane Arbus. Crewdson’s imagery has also infiltrated the pop culture landscape–including his inimitable Six Feet Under ads and Yo La Tengo album art.

“Shot over a decade with unprecedented access, Gregory Crewdson: Brief Encounters beautifully bares the artist’s process–and it’s as mesmerising and riveting as the images themselves.”

This brilliant and thought provoking documentary that takes staged photography to a whole another level was released on the 31st of October 2012 in the USA, we are not sure at this time when it will be available internationally, but if your in the United States you can find out where screenings are being held by clicking here.