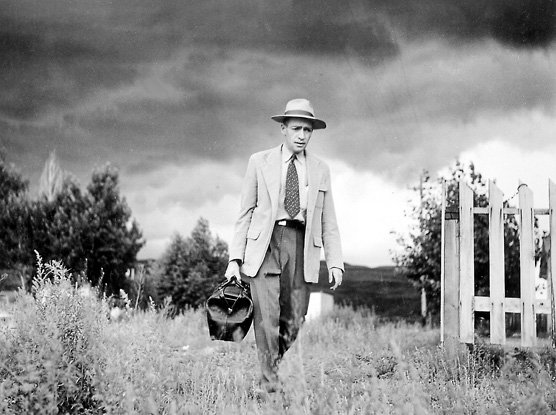 This beautifully composed documentary based on the pioneering photographer in photojournalism, William Eugene Smith compiles a number of fascinating key moments in his life, with such people like John Berger, Jim Hughes, Evan’s Valens and many more, talking about his impeccable way of working as well as him as a person. W. Eugene Smith was a phenomenal American photojournalist known for being a complete perfections, always trying to bring the truth out in his photos as well as bringing back some of the most brutally vivid World War II  photographs. Stubborn to comprise for any one, even for his LIFE magazine, yet through this stubbornness he was able to convince LIFE magazine to publish the first photo essay on a coloured person.

‘W. Eugene Smith learned the hard way that photography could be too easy, a matter of making expert images of interesting subjects. He set himself to learn the truth – about himself as well as his subjects. In the process, he produced a series of photographic essays, for LIFE and other publications, whose passionate involvement set a standard for what photography can be. Gene Smith was a loner, a driving and driven man, who bucked the system of which he was a part. Some say he sacrificed his career, and himself, on an altar of self-destructive idealism. When he died at the age of 59 in 1978, he had $18 in the bank. But his name had become synonymous with integrity. His work was his memorial.’

In 1936 Smith had graduated from Wichita North High School, where shortly afterwards he began his career by taking pictures for two local newspapers, The Wichita Eagle (morning circulation) and the Beacon (evening circulation). Moving to New York City he began to work for Newsweek and became known for his incessant perfectionism and fiery personality. Smith was fired from Newsweek for refusing to use medium format cameras and went on to join LIFE Magazine in 1939, where he soon resigned from there too. In 1942 he was wounded while photographing battle conditions in the Pacific theatre of World War II. Then he actually entered World War II as a correspondent for Ziff Davis Publishing and then LIFE again, on the front lines of the island – hopping American offensive against Japan, photographing U.S Marines and Japanese prisoners of war at Saipan, Guam, Iwo Jima and Okinawa.

In 1950, he was flown to the United Kingdom to cover the General Election, in which the Labour Party, under Clement Attlee, was narrowly victorious. LIFE had taken an editorial stance against the Labour government, where in the end, a limited number of Smith’s photographs of working-class Britain were published, including three shots of the South Wales valleys. In a documentary made by BBC Wales, Professor Dai Smith traced a miner who described how he and two colleagues had met Smith on their way home from work at the pit and had been instructed on how to pose for one of the photos published in LIFE.

Smith cut himself loose from LIFE over the way in which the magazine used his photographs of Albert Schweitzer. Upon leaving LIFE, Smith joined the Magnum Photo Agency in 1955, where he started his project to document Pittsburg, yet this project which was supposed to take him only three weeks, managed to have spanned to three years, in which he was able to compile tens of thousands of negatives. It was far too large to ever be shown, although a series of book-length photo essays were eventually produced.

In January 1972, Smith was attacked by Chisso employees near Tokyo, in an attempt to stop him from further publicizing the Minamata disease to the world.  Although Smith survived the attack, his sight in one eye had sadly deteriorated, yet this didn’t stop him. Smith and his Japanese wife lived in the city of Minamata from 1971 to 1973 and took many photos as part of a photo essay detailing the effects of Minamata disease, which was caused by a Chisso factory discharging heavy metals into water sources around Minamata. One of his most famous works, Tomoko Uemura in Her Bath, taken in December 1971 and published a few months after the 1972 attack, managed to draw worldwide attention to the effects of Minamata disease.

Complications from his longterm consumption of drugs, notably amphetamines  (taken to enable his workaholic tendencies), and alcohol led to a massive stroke, from which Smith sadly died in 1978. Smith became perhaps the originator and arguably the master of the photo-essay, by literally becoming one with his subject and completely submerging himself in their life like no other photographer had done before. Today, Smith’s legacy lives on through the W. Eugene Smith Memorial Fund to promote “humanistic photography.” Since 1980, the fund has awarded photographers for exceptional accomplishments in the field.

“I am a compassionate cynic, yet I believe I am one of the most affirmative photographers around. I have tried to let the truth be my prejudice. It has taken much sweat. It has been worth it.”