The Smallest Instant Portrait Studio in the World 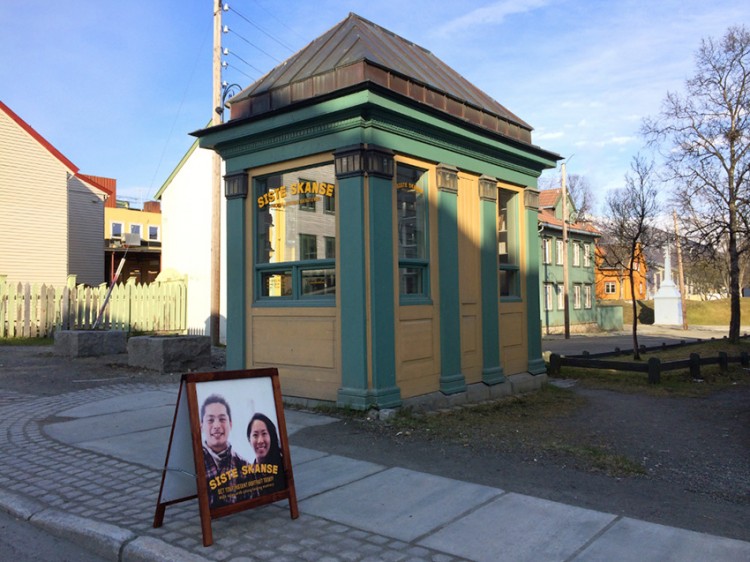 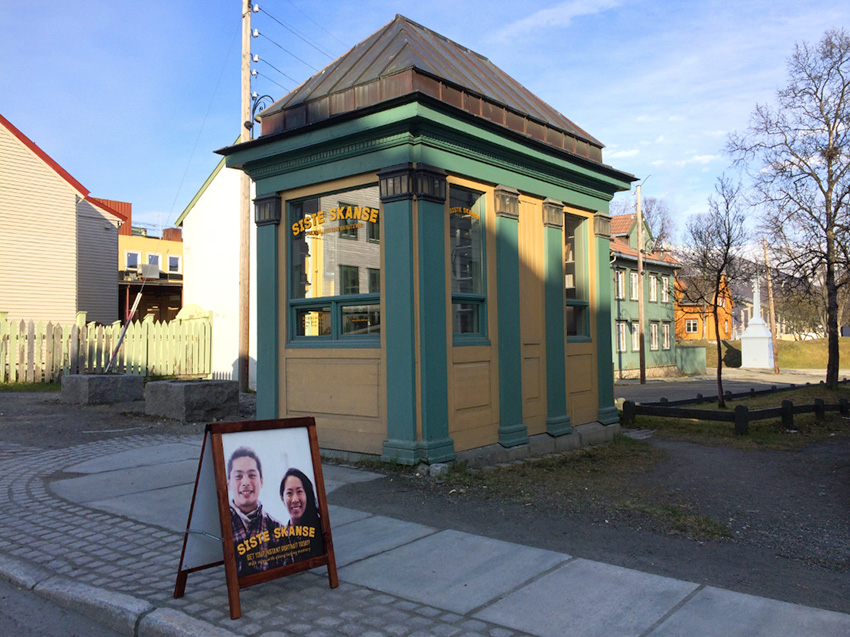 “The best things in life come in small packages”, is definitely true for this tiny studio situated in Tromsø, Norway! Kristian O. Gundersen, the photographer who runs this space has been told the building was originally built some 100 years ago and served as a newspaper kiosk until the mid 80s. It stood empty for about 20 years until the self-claimed world’s smallest instant portrait studio opened up in January 2014 called ‘Siste Skanse’ meaning ‘The Last Stand’.

Since O.Gundersen opened he’s had a wide number of sitters come through his tiny studio door. This treasure trove of Polaroid film and cameras is so small that it can only house a maximum of five people, the most he’s ever had in there is at a squeeze of 10!

We were able to talk to the Kristian O. Gundersen about this beautiful studio and how this idea came about:

Film’s not Dead: Welcome Kristian! Could you start off by introducing yourself, where your from and how your love for analogue photography began?


Kristian O. Gundersen: This has to be the toughest question to answer. – Who am I? Certainly not educated nor a professional photographer, I’m just a 30 year old dude who capture my surroundings through a couple of vintage cameras.

I´ve always lived within the arctic circle. I grew up in the remote islands of Lofoten and ventured further north to the city of Tromsø, Norway some 10 years ago. The coordinates are 69.6828° N, 18.9428° E in case you were wondering.

My love for analogue photography began with a 35mm pinhole camera, belonging to my then girlfriend, now wife, and rapidly I took the step from 35 to 120mm and all the way up to 5×7″. Whilst experimenting with different analogue expressions I developed, so to speak, a passion for the various polaroid cameras grew inside me, and I have now ended up only shooting instant film. It´s by far my favourite media and the opportunity of having a finished picture within two minutes or less amazes me every time I peel apart the physical instant film! 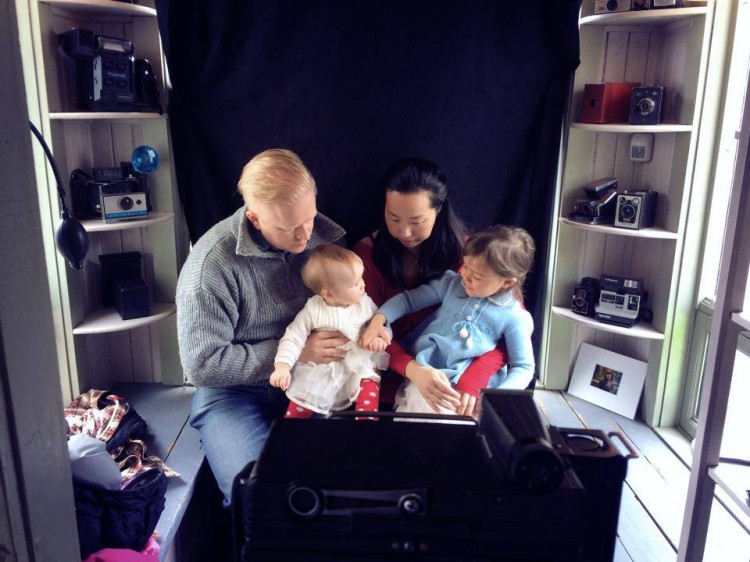 Film’s not Dead: We accidentally stumbled across your Polaroid studio whilst on Instragram and were amazed to see such a beautiful tiny studio. Could you explain to us what is ‘Siste Skanse’ and where did the idea for the world’s smallest studio come about?

Kristian O. Gundersen: “Siste Skanse” is Norwegian and can be directly translated into “The Last Stand”. Based upon the definition you can say I’m holding a defensive position with instant analogue photography in the face of the overwhelming digital era. I think of Siste Skanse as the last defensive force in my city against the all-digital studios who punch out hundreds of photos after a single photoshoot. Siste Skanse is a rare occasion where the outnumbered defenders of analogue photography succeed in their endeavours and get to fight another day.

The idea begun some 2-3 years ago when I was looking for my own studio. I´ve always enjoyed small spaces and the possibilities that come with them. The smaller the better. Before it became “Siste Skanse” it had functioned as a tobacco and newspaper kiosk since the early 1900s until it was abandoned and left for dead in the 80´s. About three years ago it was restored on the outside and left untouched on the inside. After months of detective work trying to figure out who was the owner I landed on “The Church City Mission of Tromsø”, one of the largest humanitarian faith-based organisations in Norway. I told them about my idea, even took my first photo of my contact in the mission inside the kiosk and I haven’t looked back since. As I was moving in mid January a lady walked over and told me she haven´t seen people inside the kiosk since 1984!

The kiosk feels like a swiss cheese in the winter; ice cold (I trust a radiator and an extra fan to keep me warm). From January to mid March I could only get a 15°C / 59°F stable temperature inside. Siste Skanse, with its 63sq feet total area, is the self-claimed world smallest instant photo studio (let me know if anyone knows about something smaller). The studio is even smaller with floor space measuring only 35 x 43 inches. Half of the kiosk is designated for waiting customers with one chair available. The space is packed with 5 people inside, however my record so far is 10. As I mentioned earlier, it´s all about the possibilities that come with small spaces.

Film’s not Dead: You’ve written on your website ‘I started with digital photography about 12 years ago, got tired of the constant chase for the perfect image and instead went fully analogue.’ This is music to our ears but what is it about film that you prefer and out of your collection of cameras which one would you say is your favourite to shoot with?

Kristian O. Gundersen: True, digital photography really ruined the way I approached photography. It´s so easy for everyone these days with stabilisators, oceans of ISO and whatnot you can do before you start editing the Hell out of your photo in Photoshop or Lightroom. I often ask digital photographers this question: Was it you or Photoshop who composed that photo? -Most of them get annoyed and refuse to answer.

The thing about film for me is not so much about the film itself. It´s more about the whole thing of analogue photography. Shooting digitally you can cut and paste body parts as you like but with film you can’t (unless you´re one of those analogue photographers who retouch your photos digitally).

I like the idea of how you´re supposed to think about everything and compose the photo BEFORE you shoot. I never measure anything, never position lights and never ever do I edit my photos. A single portrait can take up to two hours to compose and if I’m lucky I get 5-10 pictures from a 6 hours session. Everything I photograph is done with instant film. I tell everyone that everything that comes out of my camera are slightly out of focus and never sharp. It´s just the way I do things. It´s all in the imperfections and light leaks. The beauty is in the unplanned, but inevitable imperfections.

I have no favourite camera. I have cameras. My favourite camera is based upon which day it is, if I’m roaming around the city you´ll probably see me with the 1916 Kodak Hawk-Eye with a Polaroid 600SE back attached to it, in Siste Skanse I use the Graflex Crown Graphic with a Polaroid #405 back and from time to time I bring out the beast, the 5×7″ Gundlach Korona, equipped with a homemade Graflok back so I can use it for instant photography. There´s also a couple Polaroid Land Cameras in my hands now and then. I can´t choose a favourite because they are all so great in their own unique way. 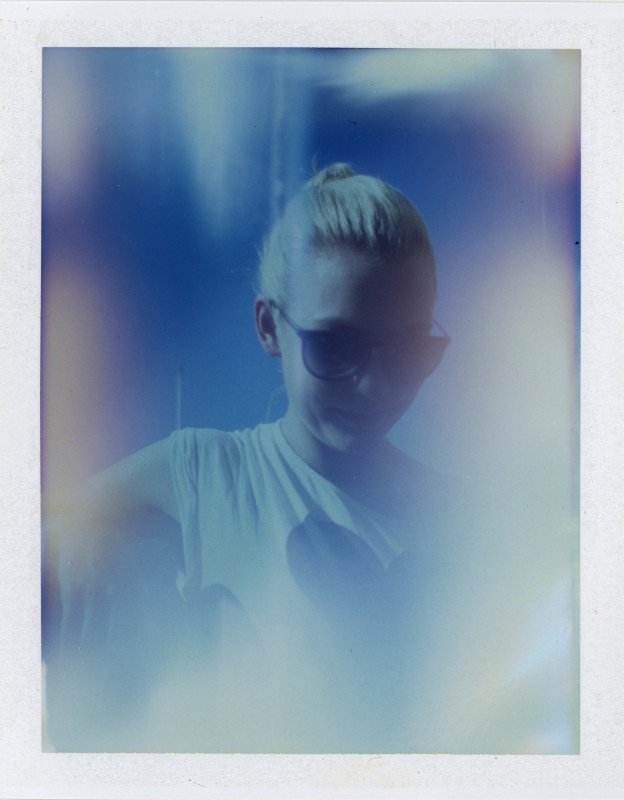 Film’s not Dead: Could you please talk us through the process that happens when someone comes into your studio to get a portrait taken?

Kristian O. Gundersen: With Siste Skanse the portrait session is obviously shorter as most people drop by and walk out of there with a portrait 5 to 10 minutes later. People get to choose between street view background or a black backdrop. During the winter (no daylight) I use three desk lights mounted upside down in the ceiling and during summer (midnight sun) its all about the natural light. Most people want a photo with a smile on their face, some want it serious, and some even dress up for the occasion. I trigger the Crown Graphic shutter and after two minutes of development they can leave happy with their instant portrait. A couple from the UK dropped by to have their photo taken, they ended up staying there for two hours and left with several photos and a free camera!

I usually keep the negatives so I can develop them and scan them for my own portfolio use.

Film’s not Dead: If you could give a first time user tips on using Polaroid/Instant Fujifilm what would that advice be?

Kristian O. Gundersen: Get a Polaroid Land Camera. Forget the Polaroid 600 / SX-70 / Spectra cameras. Seriously. Anything from the 100-200-300 series should work fine. Remember to modify the battery (there are tons of tutorials online) and you should be all set. If you find the film too expensive your priorities are not set straight; Eat later, buy film today!

Capture those moments on a piece of paper and hang it on your fridge so it can remind you to burn through even more film and capture even more beautiful moments. If you ask to take a strangers picture no one will refuse. The Land Camera is so good looking and nobody will ever turn you down. It´s a great conversation starter too! 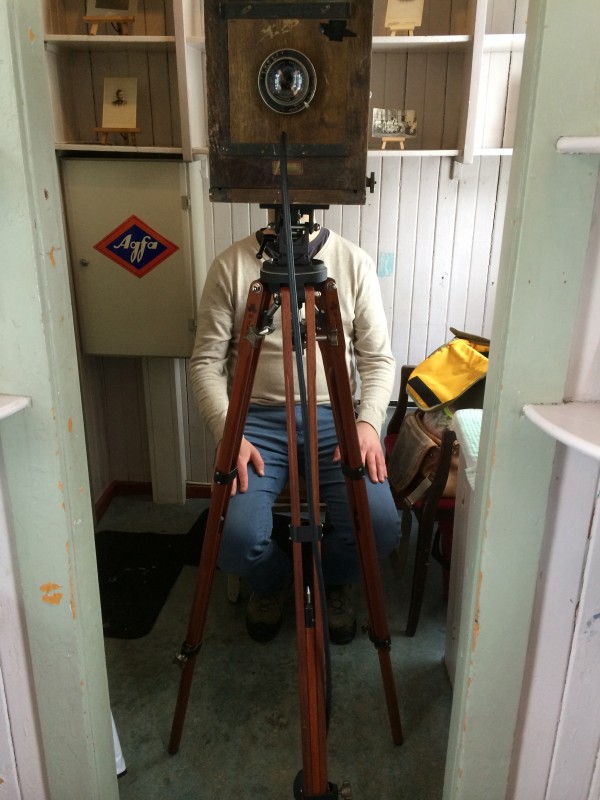 Film’s not Dead: We think what your doing is fantastic and wish there were more portrait studios around like this. What are your plans for the future and is there any projects we should be looking out for?

Kristian O. Gundersen: My plans for the future is to be exactly where I am. I have no plans to expand or go larger, I´ve found my home sweet home in Siste Skanse. The only thing I would wish upon was running water so I can convert it into a darkroom whenever I need one. As for future projects there´s always something keeping me busy. Instant photography has taken me places I´ve never imagined. I have a large product line of camera straps to photograph during this summer for a New York based company called Cecilia and everything will be done with instant film. I guess I must be doing something right.

Among other projects I want to publish a limited edition book with the first six or 12 months of studio portraits from Siste Skanse early 2015.

Film’s not Dead: Thank you for taking the time to do this interview with us is there anything else you would like to say to the readers of Film’s not Dead?

Kristian O. Gundersen: Follow me on Instagram! -No, just kidding. Save your memories on paper instead of a hard drive.