4,808 self portraits and still counting…. 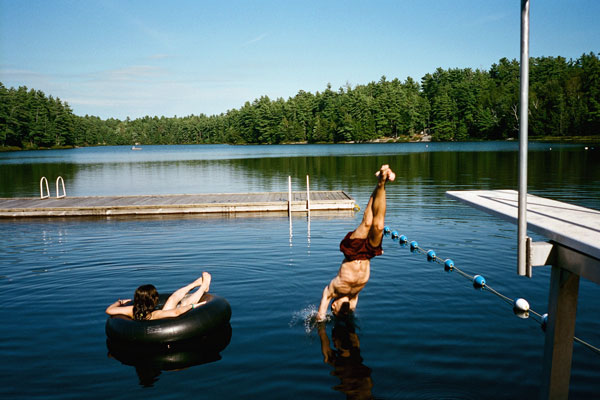 The epic photo diary that has accumulated an epic archive of more than 4,000 images, taken over the past 14 years by Toronto based photographer, Jeff Harris. 14 years deep into this amazing project, Harris has told us that he does not plan on stopping any time soon.

As one flicks through his website, filled with endless amounts of pictures, I am absorbed into the story of this person’s life, and it is fascinating to see someone’s daily life documented everyday without fail, no matter the circumstances. Harris has used this project to go through relationships, to battle his way through cancer, to documenting himself jumping into icy ponds as well as just capturing his day to day activities. To see Harris’s extensive archive of photographs, then please click Here.

Film’s not Dead: Why did you start taking pictures of yourself?

Jeff Harris: I started it as a visual diary, I wanted an archive of my life, and I didn’t have time to write in a diary but I did have the two minutes it takes to take a photograph. I was inspired by the last year of the millennium. It seemed like the whole world was in countdown mode in anticipation of Y2K (2000) and so this was my way of celebrating. I only thought I’d do it for one year, but once that year was over I thought it wasn’t so hard so I decided to continue indefinitely.

Film’s not Dead: For this project have you used the same camera throughout as well as the same type of film or has it changed over the years?

Jeff Harris: I’ve been shooting with the same Olympus Stylus camera since Day 1. I use the camera until it breaks, and then I go find a replacement one on Craig’s List. Part of it is that I like the consistency, and I was brought up on film cameras so this method of photography is a link to my past. I also like that film has an imposed limitation — I generally only take about 4 or 5 photos a day (and then pick the best image). If I was shooting digital, I would probably take 100 photos a day, and I would be overwhelmed with choice and my hard drive would fill up! The film I use is Fuji Superia 400.

Film’s not Dead: How long have you been working on this? And how much longer do you think you will be doing it for?

Film’s not Dead: How many photos do you tend to take in a day?

Jeff Harris: Around 4 or 5… but it can depend on how interesting my day is or how inspired I am.

Film’s not Dead: How do you manage to gain access to these famous faces who become your photographer?

Jeff Harris: Just by being out and about in a big city, it’s not too hard. I generally meet them at small music shows, Q&A at a movie theatre, or doing a book signing.

Film’s not Dead: How do you go about asking them, for example the one with Gene Simmons?

Jeff Harris: My friend was doing a professional photo shoot with Gene Simmons in a hotel room, and I went along as the assistant. After the photo shoot was done, I asked if Gene would take my photograph and he obliged without hesitation. I think celebrities enjoy me turning the tables and getting them to be creative instead of passive.

Film’s not Dead: Do you have a favourite photo out of all the thousands that you have collected?

Jeff Harris: Any of the images of me diving into water in the frozen cold of winter are my favourites!

Film’s not Dead: After you were diagnosed with cancer did your perspective change on how should capture your life?

Jeff Harris: I didn’t want the disease take away this project that was so important to me. My project has always been about life, and all the good and bad that goes with it. I am very proud to have a record of my cancer. Cancer turned my life upside down — specifically in it taking away my ability to walk freely. This project challenges me to live up to the adventurous spirit I had before I got sick.

Films’ not Dead: What is your most rememberable day while taking these photographs?

Jeff Harris: There isn’t one single day… I’m just proud that I can account for the passage of time. I have an archival reference as to how I spent my days — today, this day, will never happen again, but I will at least be able to remember it forever.

Film’s not Dead: Looking through all your photographs what do you feel this project means to you?

Jeff Harris: I think that people admire the commitment to sticking with it through good times and bad. I like to draw attention to the fact that we all have our own “calendars” where each day we have stories unfolding. It’s hard to believe when you sit beside people on a packed streetcar that every one has a life full of happiness and heartbreak and tragedies and miracles.