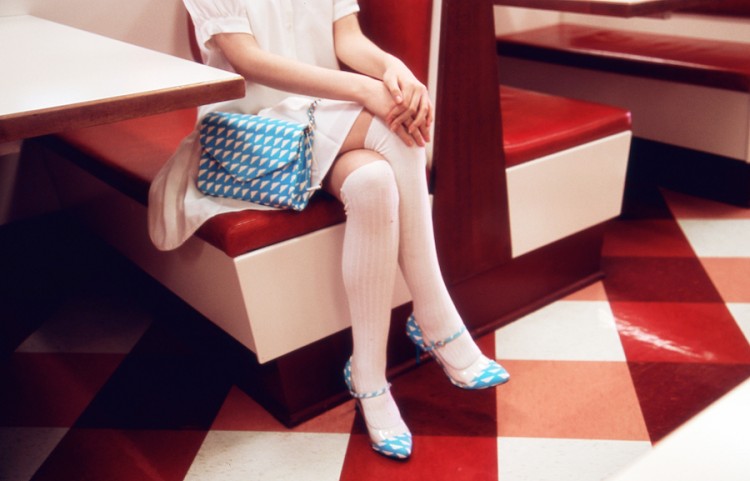 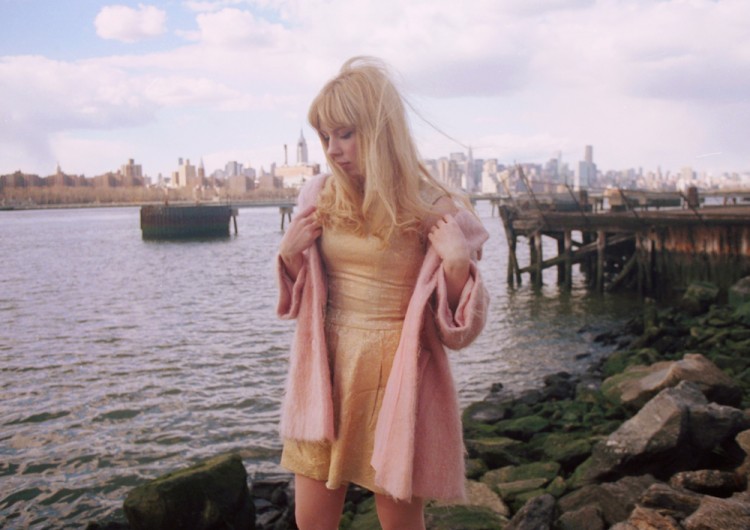 If you’ve been around on Flickr for the past five years, you are sure to have come across Honeyuck’s profile – we surely have! Hana Haley’s (you didn’t think Honeyuck was her real name, did you?) pastel-coloured, nostalgic world of femininity is today’s feature on our FOCUSED series. At only 24, not only she collects hundreds of likes throughout social media, but also shoots for Nylon and has had her work featured in several magazines around the world. She also just launched her first book, “My Eyes Are Full Of Honey”. Despite an apparent very busy schedule, we caught up with Portland-born, San Francisco-based photographer via email to find out more about her work and why she shoots film:

Film’s not Dead: Could you start off by telling us a bit about yourself and how your love for photography began?

Hana Haley: My love for photography started with high fashion magazines between the years 2004-2006. I was 14 and had never seen photographs like the haute couture editorials in W magazine. I then discovered photography on the website Flickr in 2008, via a male photographer who I had a big crush on. In true teen girl fashion, I went and got a film camera to take photos and impress him with. I really didn’t expect to become a photographer the way I did, it was never the planned.

Film’s not Dead: You’ve mentioned previously that Canon AE-1 is one of your favourites to shoot with. What makes it so special for you?

Hana Haley: My admiration for this camera comes from its functionality and trustworthy results. I learned my basics on him (I’ve decided he has a gender) and find it so amusing to see the photos I was taking in 2009 versus 2014… I never knew anything about aperture settings or ISO. I recently gifted my AE-1 to a friend and am now shooting with a 2000s analog SLR. 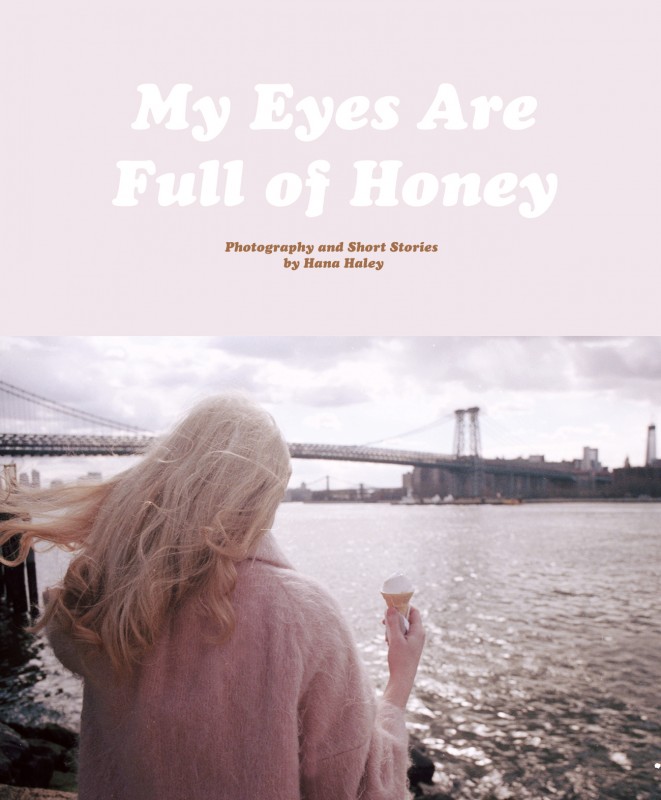 Film’s not Dead: You just finished your first book, “My Eyes Are Full Of Honey” (which describes your photography pretty well, by the way!). How was the process of editing the pictures for it?

Hana Haley: 2014 marks my 5th year as a film photographer…I wanted to archive and display the best of those 5 years in a tangible paper form. So I selected the five series that were most personal to me and had potential for developed short stories.  The chosen photos helped explore various themes I wanted to write about: the series “A Girl Named Ditty” explores the way I feel about my father, “Paper Virgin” is about abuse, and “Faux Love Story” is about personal narcissism.

Film’s not Dead: Was it an independent publication? If so, what were the pros and cons of doing it that way?

Hana Haley: Yes! I am self-publishing the book and have been working on it for nearly five months. I had very specific ideas of what I imagined the book to be and I wanted authority over all aspects: the design, the font, the layout, the cover, etc. The biggest con is that I’m unable to sell the book at an ideal price and I also have to submit it myself to stores and stockists, which I have no experience with.

Film’s not Dead: The book also contains some short stories and we think your photos do have a certain sense of storytelling. Is it on purpose or natural?

Hana Haley: In the past I would write synopses, sometimes full scripts, for my photo shoots. 4 out of the 5 series in my book had scripts originally written for them. A lot of my visual inspiration stems from amateur film directors more than it ever has from photography. It’s crucial I attach emotional meaning, plots, and story lines to my photographs or else they feel empty and trite (something fashion photography is extra susceptible to). 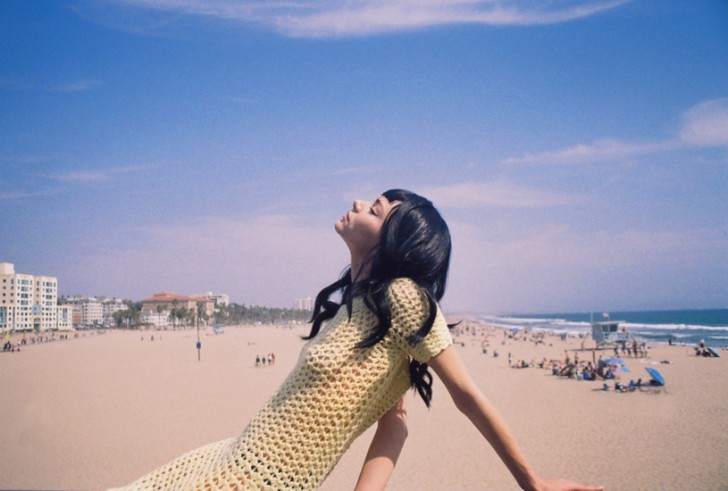 Film’s not Dead: Any favourite writers or photographers whose work really inspires you?

Hana Haley: I’ve always been influenced by the thoughtfulness of Miranda July, the visual treat of poets/writers like EE Cummings, Sylvia Plath and Francesa Lia Block. Right now I am going through an Ellen Von Unwerth binge which is a fashion photography goldmine. I can’t believe I never knew her work before.

Film’s not Dead: Your pictures have a sense of nostalgia too. Would you say you’re a nostalgic person? Was that what got you into film photography in the first place?

Hana Haley: I’m horribly nostalgic. When I was younger I would write everything down that I wanted to remember with these vivid and luscious descriptions. I would draw pictures and make songs about things that happened at school. I eschewed forgetfulness in every way possible! When I realised I could document and preserve my life visually, I actually stopped writing things down and relied solely on my camera. I guess I can’t help but bring this sense of melancholy into my personal and commissioned works.

Film’s not Dead: Also, one can’t stop noticing how feminine your works are, and that girls are usually your main subject – you have a very different approach than other fashion photographers. What do you keep in mind when you’re shooting fashion? Is there a certain type of girl you like to portray, for instance?

Hana Haley: I’m an incredibly feminine person which is probably why my photos appear this way, and why I focus on fashion… what other form would allow that much mascara and flowers? When I’m shooting I always keep a sense of story and truth in mind. A lot of fashion photography is painfully staged, lifeless, and relies too much on the beauty of the model to carry the weight of the photo. I try my best to avoid that. I like to work with women or girls who are not actual models because they are less likely to think that their physical attributes are the main part of the picture. I prefer to portray models who are not aware of themselves or anyone watching. Real humans, not models.

Film’s not Dead: Do you have any plans or future projects that we should look out for?

Hana Haley: I’ve just filmed my first narrative short film that will be premiering at a film festival here in San Francisco next January.

Film’s not Dead: Would you ever give up film? What do you think about the current state of photography?

Hana Haley: I can’t imagine stopping, no matter the costs to procure & process my film, I’m willing to pay it. Shooting digital always feels odd and almost wrong to me. I don’t have a relationship with my digital cameras the way I do with the analogue I think its appropriate for photography to shift and evolve into different things, but just as digital is the most popular form of it, I think there will always be the film minority that refuses to die out.

My Eyes Are Full Of Honey Book