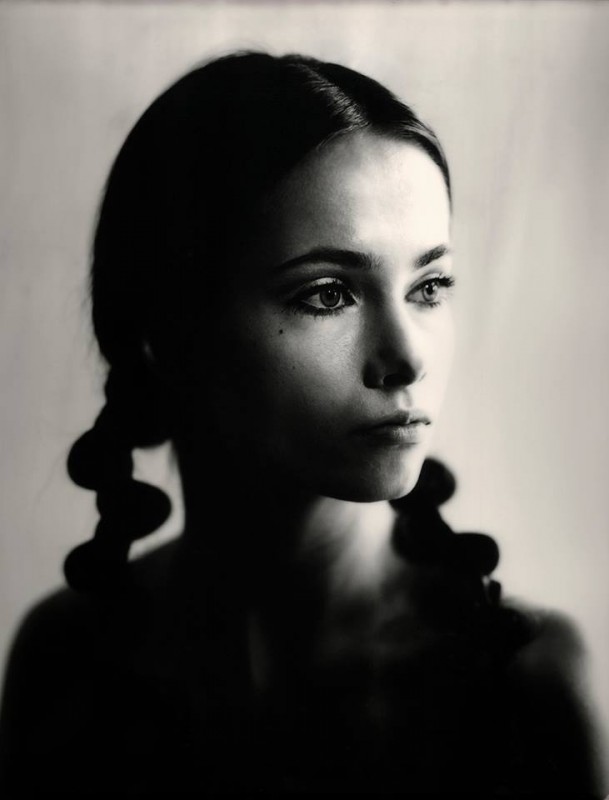 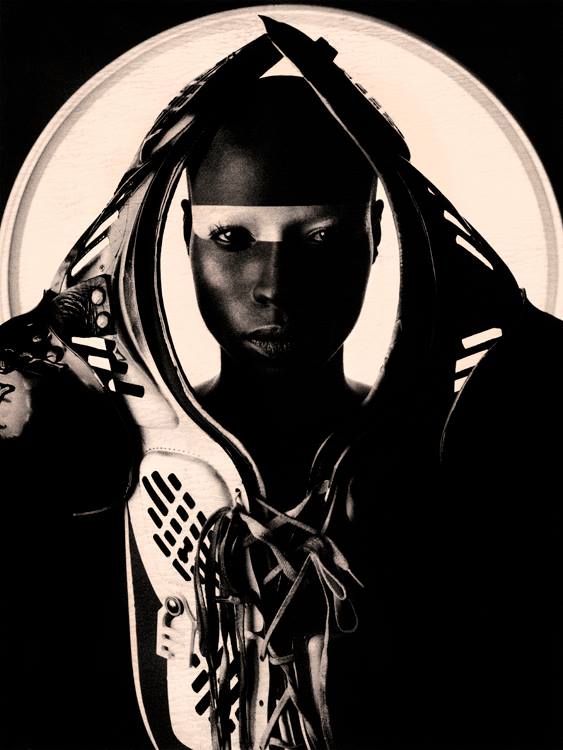 What happens when you microwave an instant picture? Oliver Blohm, 27, knows the answer – after all, it was his experiment that led to the “Hatzfrass/Fast Food” series back in 2012, and since then he has been one of The Impossible Project’s golden stars, shooting the campaign for their new black and white film and featured along Alison Mosshart and Scott Willis in the brand’s “8×8” exibhition in London, February 2015. His work, however, is anything but limited: besides publicity, he is also a portrait and fashion photographer with an unique technique – and analogue, of course. We caught up with the German photographer to know more about his view on analogue photography and the process of experimentation.

Oliver Blohm: I was born and grew up in a little village in the north of Germany near the Baltic sea and discovered photography by coincidence in my late teens.

One day, one of my teachers asked me to take some photos for the school website at a Christmas event. The camera, a Canon Eos 350d, was brand new and funded by parents. From day one it made ‘click’ and I became the first school photographer. I was 16 or 17 at this time. But after my degree and an internship I decided against photography and wanted to go into commercials and graphic design.

In my first semester in my university I got the chance to become the assistant of the lecturer of photography. The lecturer became something like a mentor to me and helped me a lot and trained me in many different ways. At the end I was a lecturer by myself for younger students and spent a lot of time in the darkrooms and the studio to learn and to experiment. So somehow it was the universe.

Film’s Not Dead: You photograph mostly with instant cameras – what made you chose them? Do you have a favourite? If so, why?

Oliver Blohm: I think that instant photography is a great hybrid between the digital age, where you get your photo in a few seconds and the analogue world, because you have a real picture to your hand. After a few minutes you get your final result, a real one, one you can work with it. It’s not just an abstract data file, it’s a real picture with its own authenticity, aura and a touch of the unpredictable – something unique.

In the beginning my love was the Polaroid 600Se, it’s an amazing camera, but since nearly one year now, I work mostly with 8×10“ photography and the Impossible 8×10“ film. 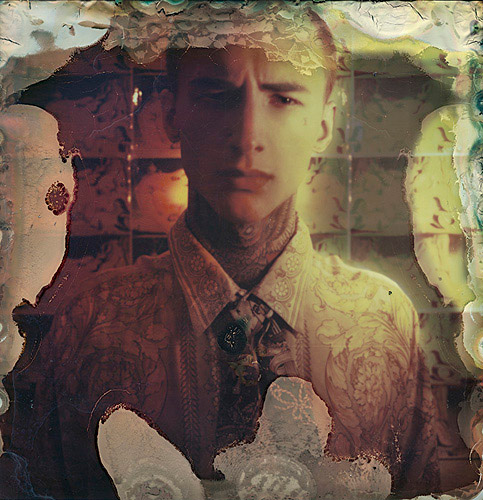 Film’s Not Dead: You attracted a lot of specialised media attention after an experiment – microwaving instant pictures. How did that process of experimenting begin?

Oliver Blohm: Everything started with Ebay to be honest. I bought some old Polaroid material and started to chat with the seller. He somehow worked for Impossible at that time and a few months later he came to Berlin to give workshops and presentations on a fair. His hotel was near to my flat and we met each other. After having a lot of fun in the bar scene of Neukölln and presenting my works and ideas, he offered me to create something so he would present it to Impossible, which was still in Vienna at this time.

From earlier experiments I somehow had some experience about what was possible or not and in which way I wanted to go. I wanted to speed up the development process. And one day I thought about the microwave in the storage room in our kitchen. One night I misused it and after creating a case for the pictures to protect them from the process of nuking, it worked. I was able to speed up the process to 2-3 min, but with some burns, shapes and colour shifts. The unique structures made the process very attractive to me and I started to experiment more with it to get something like a feeling for this experimental process. Then I was invited to Vienna to present the technique and made a portrait series called ‘Hatzfrass/Fast Food’ with this technique.

Film’s not Dead: How important is the trial and error on your work process?

Oliver Blohm: Trial and error is a fundamental element of improvement in every way and the history is full of examples. For me it’s important to keep the mind open, accept the unpredictable and accept the mistakes and failures you do as well as just doing it and not thinking too much about everything. But stay focused on what you want to do and don’t lose yourself in the infinite amount of possibilities!

Film’s not Dead: Mainly shot in black and white, your photography style could be traced to German Expressionism a little bit. What makes this type of esthetics so appealing to you?

Oliver Blohm: I was taught that you need to play in front of the camera, not behind it!

I started to make everything by hand, even my lights are sometimes hand made. That leads to me to the ‘old times’ and I’m a big fan of old movies and their aura of something real, build for the scene and the moment, not generated on the computer. I think that is a fundamental part of my aesthetic – the demand to take the old things in a modern age. My favorite example is the movie ‘Alien’, the first one, because if you compare the original scribbles by H.R. Giger and the implementation in the movie, you will see how real it looked, ages before the digital revolution and the era of green screen. It’s real, not unnatural hyperrealistic – this is amazing. 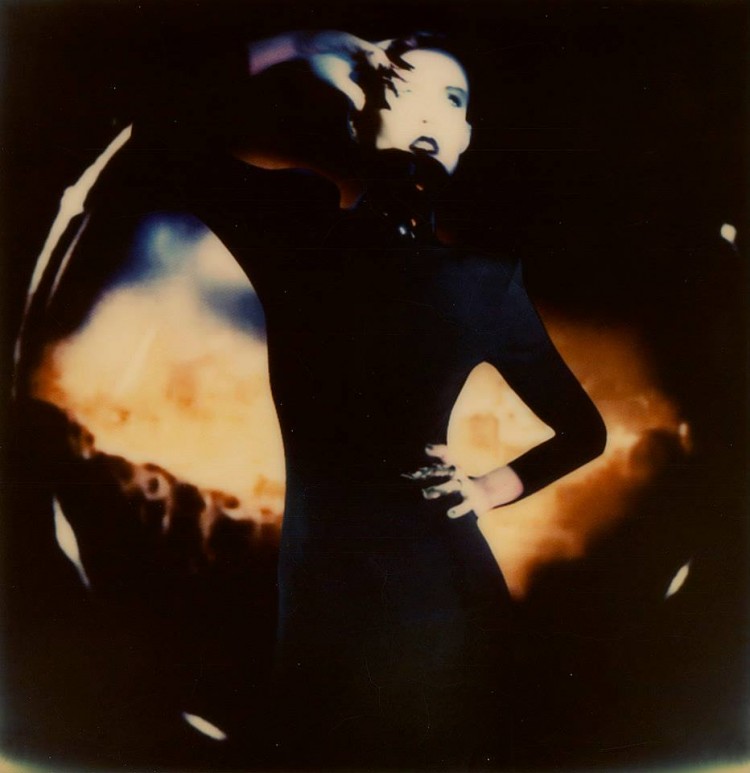 Film’s Not Dead: Being a fashion and portrait photographer that chooses to use analogue photography, do you feel any commercial pressure? As many veteran photographers chose to ditch film, do you think you’ll ever give it up too?

Oliver Blohm: That is a really good question and I think a lot about this and I’m still not 100% sure how to handle this in the future. I’m willing to make sacrifices to go as far as I can with the analogue way, but I can’t promise to work all the time analogue. And analogue is not the only truth!

Both worlds, the digital and the analogue have their own qualifications and it always depends on what you want and need. But I think and feel that analogue is coming back in many ways, but how far it will come back in the professional section of photography will be not just a decision of the people who like the analogue way, it’s still a decision of the industry, but a few examples show, that the last word isn’t spoken yet.

Film’s Not Dead: Do you have any plans or future projects that we should look out for?

Oliver Blohm: There are several things, but this could change any minute. One new door appears and another gets closed. I stopped to promise things, I have ideas, aims and goals, but I don’t know what will come to me in the future exactly and I don’t wanna know. The only thing I know at the moment is to write my thesis to make my Diploma in Communication Design and Media with the focus on photography. The rest will come by itself, I’m sure. But just follow me on Facebook or Instagram and you will stay updated.

Oliver Blohm: Thanks a lot to Film’s Not Dead for this opportunity and to Yessica, who made this interview happen.