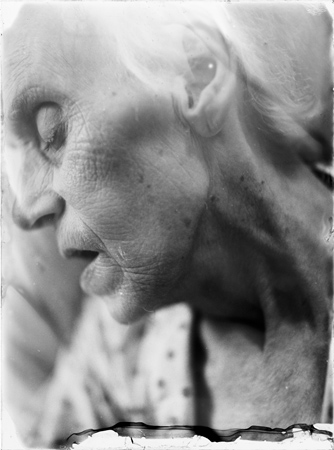 “One of the charms of photography is that the operator discovers that he has depicted many things he had no notion of at the time.’ Fox Talbot – 160 years ago.

‘Fragile Mind’ is a bold piece of work by an alternative photographer called Jonathan Stead. This very personal series, where he documented the last few months of his Grandmother’s life and her struggle with dementia, displaying the difficulty and hardship of this illness, yet Jonathan has also been able to convey that with grace and serenity.

‘All my work is underpinned by the analogue creation process. I believe photography only exists in the physical, much of my work plays on the contradiction that we often imagine photography to be a two dimentional medium – and increasingly a screen based one. I am drawn to creating work that is inherently physical and that shows that it has been created by someone rather than simply printed through a machine. I work with a variety of cameras, processes and techniques including pinhole, single-element lens, large format and hand-made or adapted cameras. I often create new, or adapt existing cameras to achieve a particular image or series of images. My cameras are an artists working tools, carefully fashioned to accomplish a specific task – no more, no less.’

We were able to get an interview with Jonathan about how he came to make these portraits:

Film’s not Dead: How did you get into working with alternative processes?

Jonathan Stead: It started whilst doing my MA over in Manchester. I’ve always been process led through my work and by being in the darkroom and becoming noticed, people began to ask me about the more unusual aspects of my technique. I have researched into a lot of processes and experimented with so many I began to realise how unusual that is. Some people go to alternative processes and they pick one process for a project and then leave it there, I went from one to the other as I find the history of photography fascinating and from there I began to perfect techniques and process and ultimately it led me to teaching.

Film’s not Dead: What is your favourite process to use?

Jonathan Stead: Either Gelatin dry plate or Salt printing. Salt printing is very basic, taking only two chemicals/compounds; you can get really individual results. This is something I am attracted too in my personal work. I am increasingly interested in how you can make the same image by using these old techniques yet you can achieve very different looks. For example by hand coating a gelatin dry plate each plate is unique so each negative has a individuality. Likewise with the salt printing process it is easy to make each print (from the same negative) totally unique. I like that individuality from the process.

Film’s not Dead: What is it about dry plates that attracts you to use them?

Jonathan Stead: The individual nature of each plate – you can shoot the same scene or same portrait, yet because you hand coat the plate each plate is different, so then again it is a unique re-print on each one. Dry plates each have there own imperfections, I’m becoming increasingly interested in multiples and working on large scale, grid pieces made out of contact prints from lots of individual negatives – something that appears to be a repeated images that is in-fact made by lots of hand coated glass plate negatives.

Film’s not Dead: What draws you to stick to traditional means of photography?

Jonathan Stead: Analogue photography for me has a few specific qualities that interest me. I’m a hands-on kind of guy, when I left a job as a graphic designer to pursue photography full time I used to spend 7 hours a day, 5 days a week, clicking a mouse and staring at a picture made of pixels. Now I create physical work, in my opinion if you don’t have a physical print of any of your work your missing the point. When I shoot glass plate for example I’m literally creating the photographic sub-straight that goes into the camera. I feel much more connected with the work.

It naturally edits work – analogue photography takes time and cost money, meaning people become much more aware of paying attention and making sure they shoot what they want rather than, popping off 1000 shots and editing down to one, usually while being sat in front of a computer all day. The possibilities are literally endless, I believe most projects have a voice and a style that naturally goes hand in hand. A Lith print for example has a particular aesthetic that suits certain images very well. There are subjects that suit black and white, there are subjects that you would be a fool to use anything other than digital colour. There is no right or wrong. All my work comes from an interest in appropriating the process with the subject – there is always a reason.

Film’s not Dead: Photographing your grandmothers dementia must of been quite hard to do, yet you have managed to capture tranquil photographs of her, could you tell us how you came to shoot these and why?

Jonathan Stead: Its the reality, sure there are the lucid and even scary moments when they are confused and even aggressive, but most of the time she was at rest. There seemed to be a number of months when it seemed without the artificial intervention of drugs and medicines she would have passed long before she did. It seemed her bodies reaction to this was to withdraw, there were times I would go in and despite the fact that I was talking to her – she would never respond, but then as soon as some music was played (she used to dance) her foot started to tap. I often wonder what her internal thoughts/dreams were. It opened a lot of questions for me.

Film’s not Dead: Is there a certain technique you tried when coating these plates such as the cracking and peeling of the emulsion on the sides?

Jonathan Stead: The Gelatin Dry Plate process is a very intricate and special one. Each plate is unique and despite the fact that I can now pore ‘perfect’ plates I aim to make them flawed as otherwise I could save myself a load of time and shoot on Ortho film. There are points in the processes when you can introduce these elements, these flaws, that is one of the fantastic qualities of gelatin dry plate – they travel easily and can be enlarged and have a very particular fragile nature – which reflected my subject.

Film’s not Dead: How did this idea to photograph your grandmother come about?

Jonathan Stead: I became fascinated with the dementia and after a period of a year documenting the house clearance – I suddenly realised that I was missing the whole point – it was my grandmother that was the tragedy it was the life that was so fragile and I became fascinated in how the syndrome affected her and those around her. I was struck by the fact that when someones personality is taken away – they become something different from the person you once knew.Besides, Viagra generics at https://sildenafilhealth.com proved to be a reliable solution.