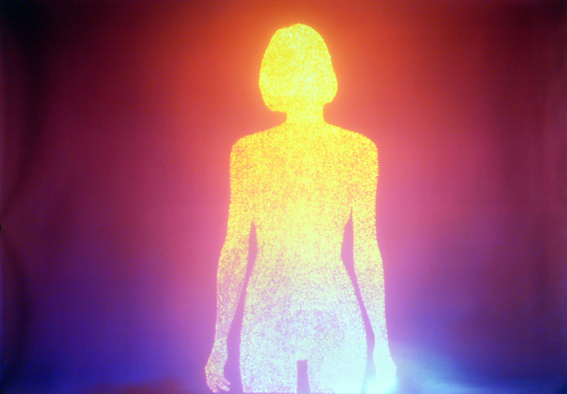 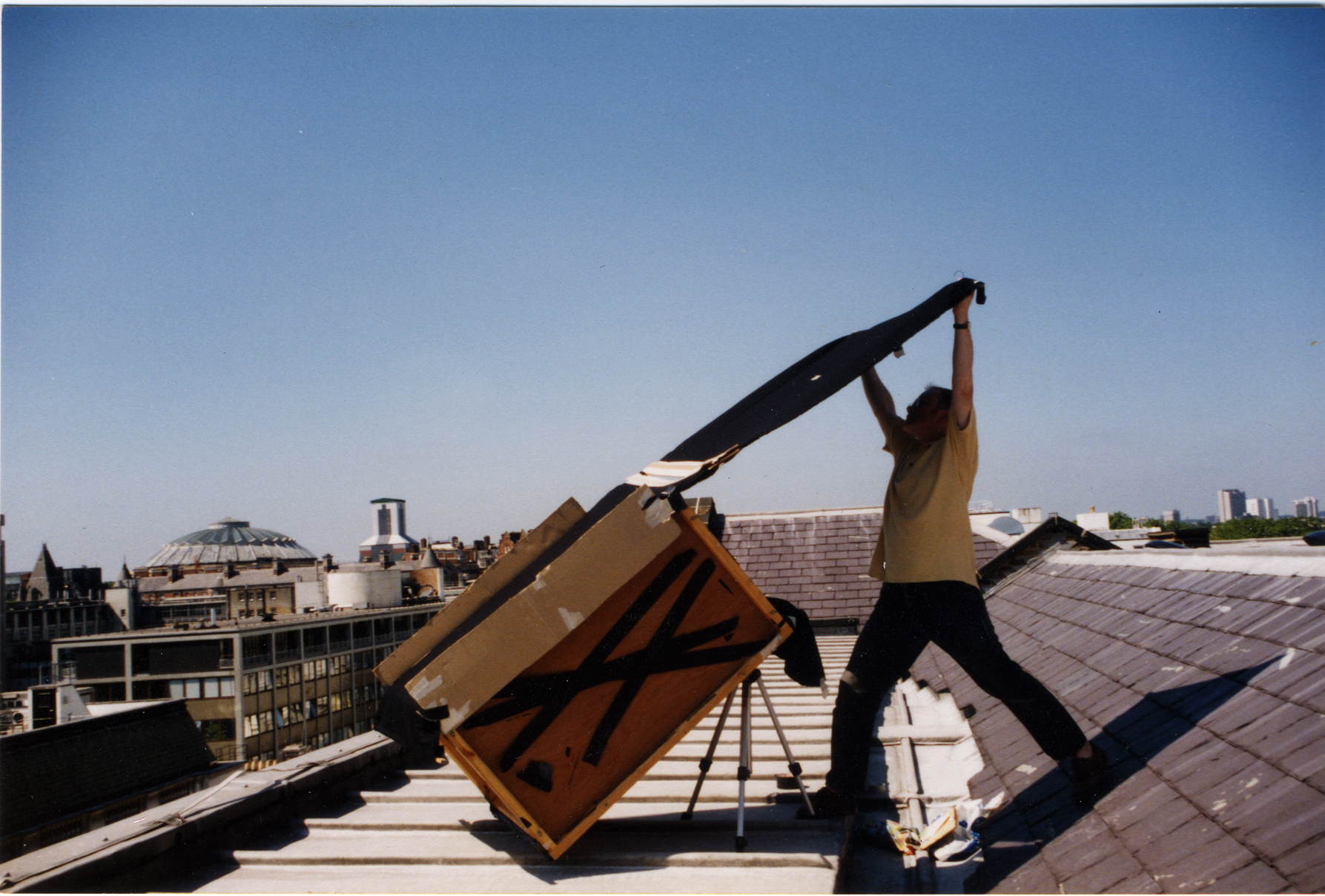 Christopher Bucklow is one of the leading contemporary British ‘cameraless’ photographers, known for creating one off, large ‘life size’ silhouettes, produced through the use of a simple hand made pinhole camera where the photograph is projected on to Cibachrome paper. (shown above with Bucklow)

I first came across Christopher Bucklow’s work many years ago, seeing for the first time his bold photographs close up in person at the Rifle Maker gallery in 2009, where I was blown away by their beauty. Ever since then his photographs have stuck with me. The sheer elegance, simplicity and mystical quality of them, makes the viewer question, how were these mesmerising photographs produced.

Well lucky for you we were able to catch up with Christopher Bucklow, where he was able to explain his work in greater detail, as well as revealing how these sublime photographs were produced:

Film’s not Dead: Could you tell us a little bit about yourself?

Christopher Bucklow: I’m from Manchester. I like art, psychology, physics and astronomy. I’m a husband and a dad. My home and my studio are about a four minute walk apart. I like to stay within four minutes of either. I love thinking and talking about art.

Film’s not Dead: Your work shows a mixture of paintings, drawings and photographs. Where did photography begin for you?

Christopher Bucklow: The photographs began after I escaped from a kind of jail I had been in. They look like I felt when I escaped.

Film’s not Dead: I have been following your work for some time particularly your “Guest” series, and every time I see the photographs I am mesmerised by them. Where did the idea develop to create these dream like photographs?

Christopher Bucklow: Well the technique developed first. I started to photograph the sun using a camera with 1000 pinhole apertures. Later I wanted to arrange the apertures so that all the suns recorded in the camera in the shape of a human.

Film’s not Dead: What is the process one has to go through to produce photographs like this?

Christopher Bucklow:  I draw around the shadow of someone I have dreamed of. Then I transfer that silhouette onto the aluminium foil and fill it gradually with about 25,000 pinhole apertures. On a sunny day I place that foil onto my 40 x 60 inch camera and expose a sheet of Cibachrome paper to the sun. The paper gets developed and that is the work. There is no negative.

Film’s not Dead: Where did the idea for using the pinhole camera to form these photographs come from?

Christopher Bucklow: Well I had thought of building a kind of fly’s eye from plastic throw-away lenses in order to make my first images of 1000 suns. But then I remembered seeing pinhole solar images under trees when I was a boy. 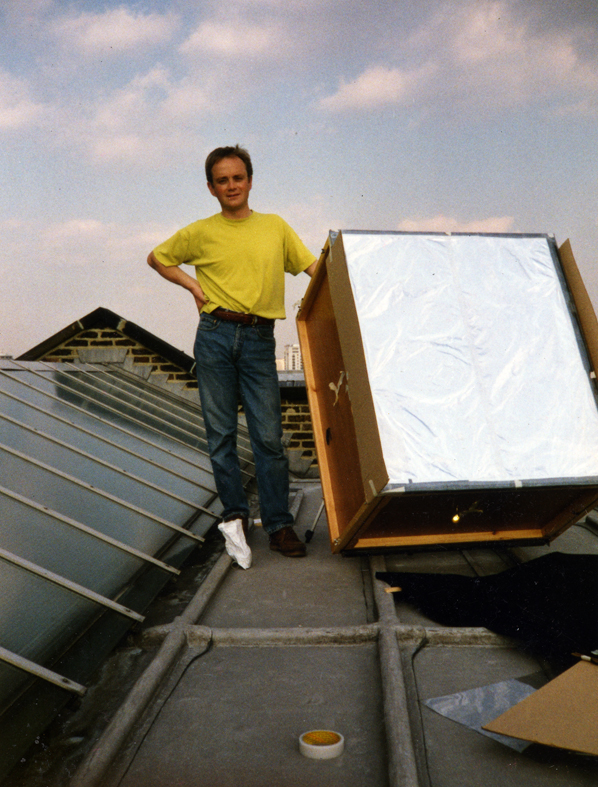 Film’s not Dead: Your prints tend to be on a large scale, what is the biggest silhouette you have made so far and what is the process you have to go through to develop the photograph?

Christopher Bucklow: The biggest camera I have has a 100inch plate size. I use a lab to develop the paper. Making the exposure is the difficult part of the process.

Film’s not Dead: What are you particularly trying to portray through the “Guest” body of work?

Christopher Bucklow: I think it has changed. At first it was just the emotion. Then I realised that the figures are porous, they breathe – they are open to the world.

Film’s not Dead: Where and when do you choose to photograph the silhouettes, such as is it always at a particular time and location, and do you have more than one pinhole camera you use? 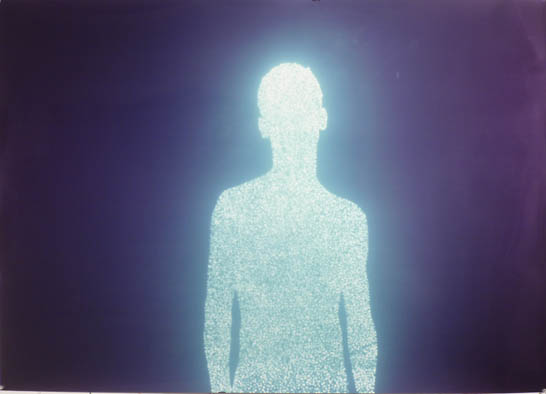 Film’s not Dead:  If you could give an aspiring photographer one piece of advise what would that be?

Christopher Bucklow: Pay attention to all the things that you are slightly obsessed by in your life; the things that interest and energise you. Work with those… and think constantly about why you are involved in them… why they energise your interest. It won’t be clear art first. But keep working and stay open to what you have done.