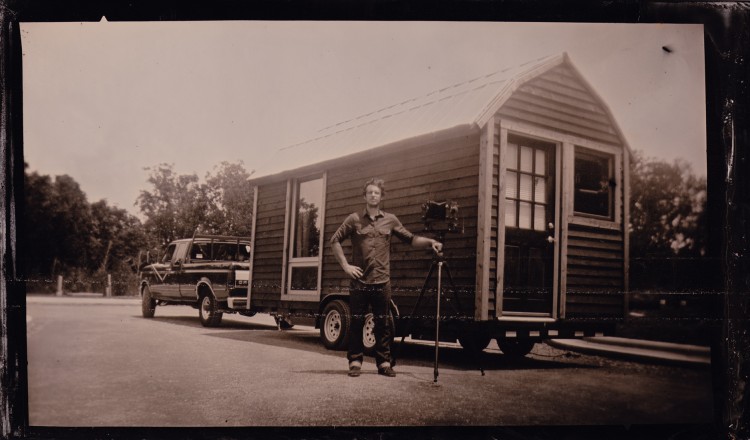 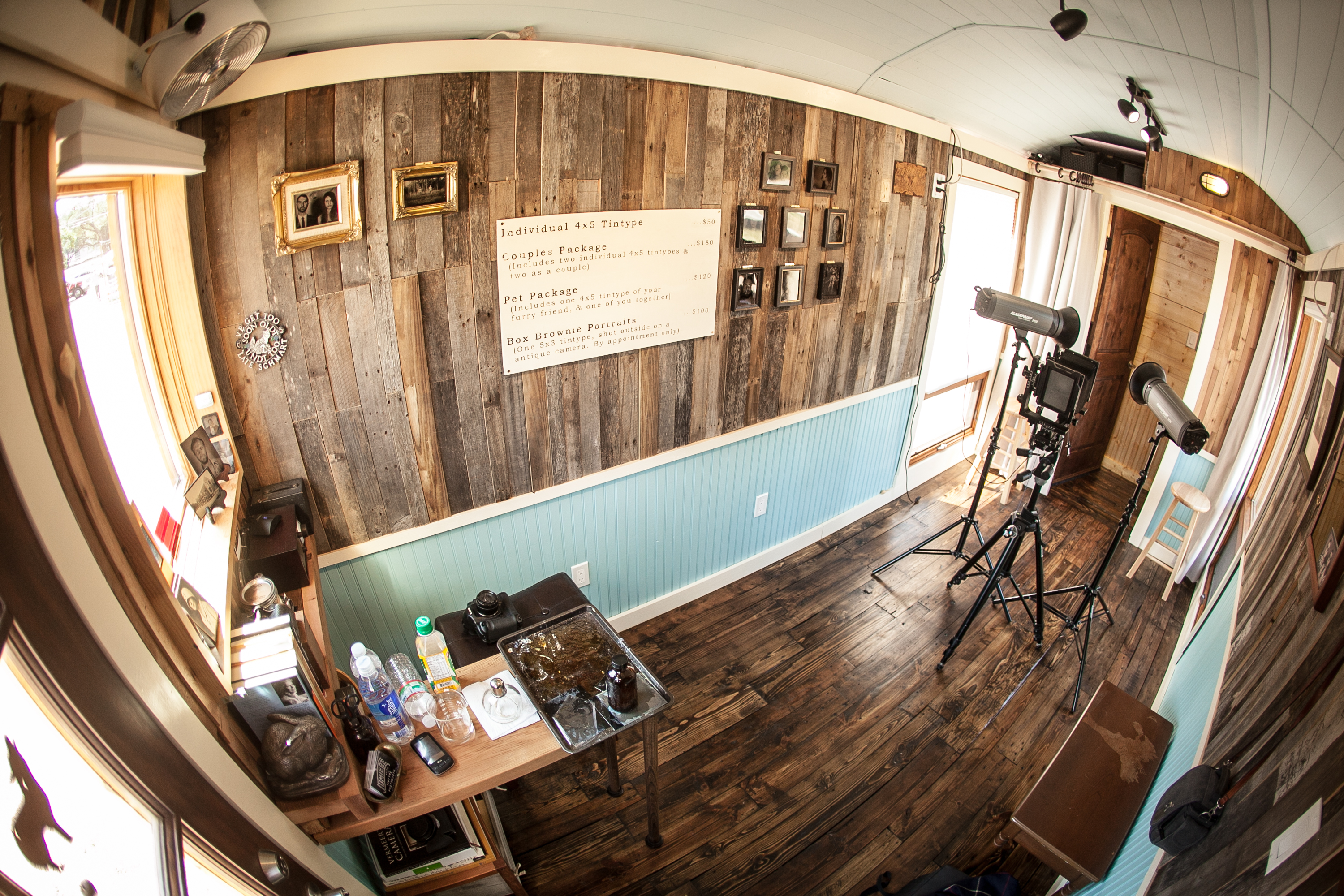 Turn the clock back 150 years ago and seeing a Tintype Trailer/Wagon on the street drawn by a horse would’ve been the norm. This hand built creation was put together by wife and husband, Loren Doyen and Adrian Whipp, which is a beautiful fully functioning mobile Tintype Studio with a built in darkroom, based in Austin, Texas.

Their goal is to simply attempt to revive the lost profession of the itinerant photographer, in which they invite people into the trailer to photograph them through the authentic process of making tintypes. Doyen and Whipp’s Tintypes only cost a mere $50 and all the photographic chemicals are handmade, in the traditional way it was done in the 1800’s.

We were lucky enough to be able to catch up with Adrian Whipp and to discuss this unique project:

Film’s not Dead: Could you please explain how you came together to make ‘Lumiere Tintype’ and what it is you’re trying to do?

Lumiere Tintype (Adrian Whipp): Lumiere is the result of a desire to do something creative with my time. I fell back in love with photography once I started playing with the process of making tintypes. With digital, the act of photography has never been so accessible, and yet we have never been more divorced from how it all works. For some it’s just another app on a smartphone. When I invite people into the darkroom, they see the process, they see the alchemy, and they fall in love with it, too.

Film’s not Dead: How did you get into practicing this 19th century process and what would you both say is your favourite part about producing a photograph in this way?

Lumiere Tintype (Adrian Whipp): I have long admired the works of tintype photographers, such as John Coffer and Robb Kendrick, but I thought it would be a completely impenetrable process. After doing a little research, I realized it wouldn’t be a huge expense to start playing around with some of the pre-mixed kits. I’m completely self taught, which is only stated to encourage people to go out there and try it. You don’t need to fly to another state to train with a master, although that would be wonderful.

My favorite part of the process is the same as for all darkroom enthusiasts: watching the image appear through the fog. It’s the same feeling you experience with film but it’s multiplied with wet plate because you made everything yourself, without relying on anyone else. It’s liberating. 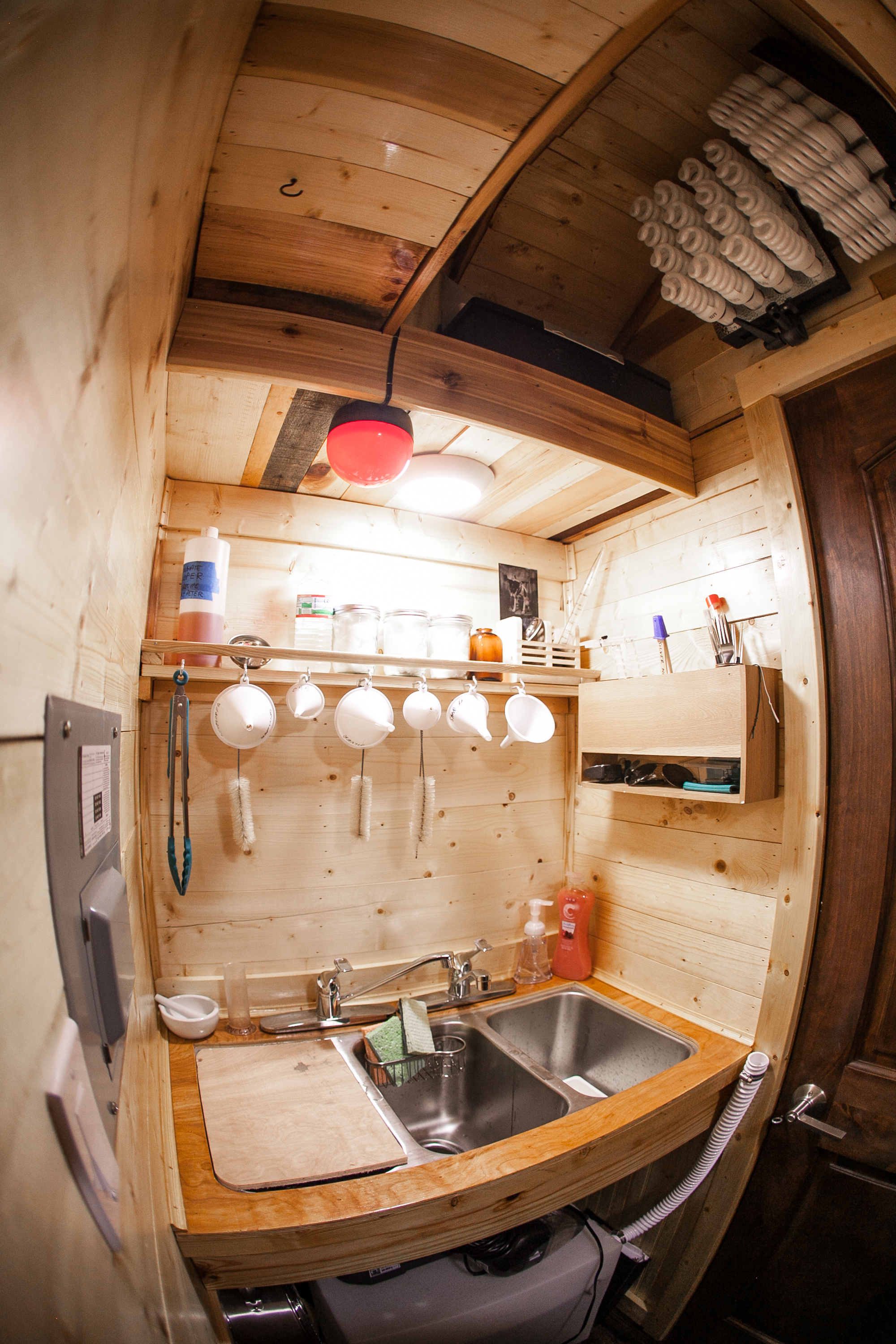 Film’s not Dead: Making tintypes is not something for the faint hearted photographer. What brought you to the idea of making plates, why not stick to roll film?

Lumiere Tintype (Adrian Whipp): I shot a lot of 8mm film and 35mm film when I was younger but then the materials were difficult to find anywhere. I’m originally from England, and at that time the darkrooms were being closed in schools and there wasn’t easy access to the equipment any more. I fell out of it all for a few years until film photography started to come back here and there. It was great shooting film again, but I never lost the feeling that I was relying on some huge company to keep funding something unprofitable in order to keep a few enthusiasts happy. The process doesn’t feel sustainable anymore, as if the companies making these products could pull the rug out from under you at any time.

With the wetplate process, you make your own film. It’s that simple, no-one else is involved. Ian Ruhter expressed it beautifully in saying something like “If I can learn how to make this, no-one can ever take this away from me”. My base chemicals will always be accessible because they are sold widely for use in other industries. I can also tweak my emulsions and developer in order to obtain different results. I’m in complete control. It’s a beautiful feeling.

Film’s not Dead: You have just finished creating your own hand built tintype trailer, congratulations! Could you tell us how you’re going to use this trailer and why you made it?

Lumiere Tintype (Adrian Whipp): At the beginning of this process, I thought a lot about how the pioneers of photography democratized portraiture for the masses by pulling horse-drawn wagons around the country and shooting tintypes quickly and cheaply.  The life of the itinerant photographer is such a romantic idea; living, working and traveling from something you built yourself and shooting photographs every day. I wanted to bring wetplate out of the studio in order to show it to people who have no idea that it still exists. People who are not photographers walk through our door and get such a kick out of the experience. They lament that they don’t hang photos on the wall any more, as well as the fact that most of us are just a lost phone or failed hard drive away from losing everything. It’s a great feeling to hand someone a tintype that will outlive their grandchildren. 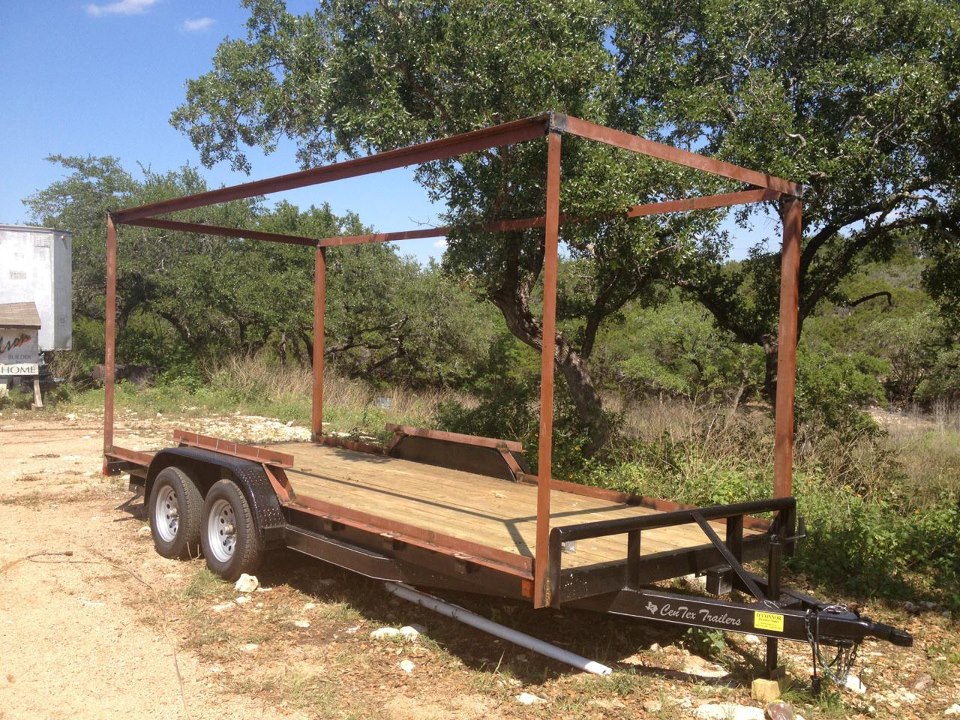 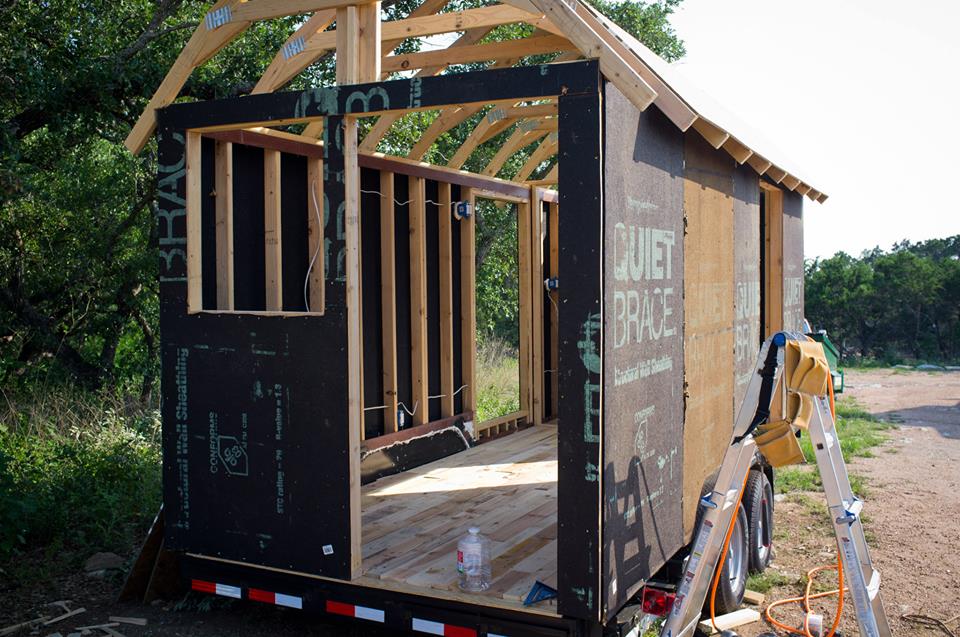 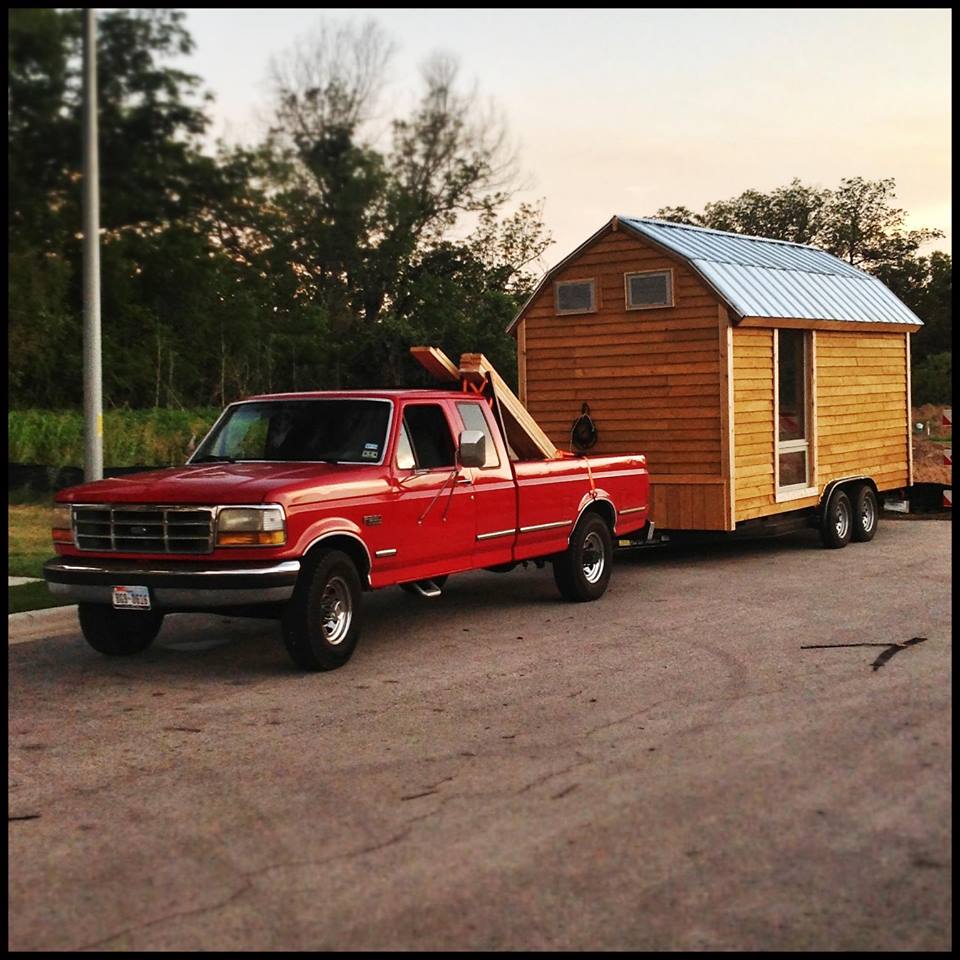 Film’s not Dead: What do you think the future is for analogue photography?

Lumiere Tintype (Adrian Whipp):  I think it can survive, there are so many people that believe in it. There’s a real punk feeling to it again, like you have to work hard to make it happen. I’m excited to see the recent explosion of interest in wet plate, as well as other alternative processes. We are attracted to it because you can’t replicate the spontaneous beauty of an analog process with 1’s and 0’s. People are doing such awesome things with wet plate – just look at Ian Ruhter. He did it all himself; he had a vision and he ran with it. The ‘period correct’ crowd may turn their noses up at it, but it’s that kind of creativity and passion that will keep the analog flame alive.

Film’s not Dead: Creating tintypes for weddings?!? Most photographers would probably think that you were mad. How does that exactly work and what is that experience like?

Lumiere Tintype (Adrian Whipp): I think its important that we offer it. Unlike digital, we can offer a time tested process to create a photograph that will become an heirloom.  It can be stressful because you really don’t want to mess that up. However, I am able to see the results of a shoot fairly quickly, unlike with roll film. If something isn’t working we can re-shoot within a few minutes.

It’s funny, I recently read of an encounter between a dry plate photographer who stumbled across a wet plate photographer in the 1860’s. At that point in time, wet plate was transitioning to dry plate, so photographers no longer needed huge wagons and access to water. Curious as to how it all worked the dry-plater stopped to talk to the wet-plater. The wet-plater remarked that he didn’t trust the new dry plate technology because, “You see, I always like to know what I have got.” I feel much the same way about tintypes – you see the fruit of your labor within minutes without having to send anything to the lab. In that sense, it’s closer to digital than film.

Of course, on her way back down the mountain, after a successful day of shooting, the dry-plater saw the wet-plater cursing his silver bath for behaving in a ‘disgraceful manner’ and ruining all of his plates. So – who knows – maybe I am mad. 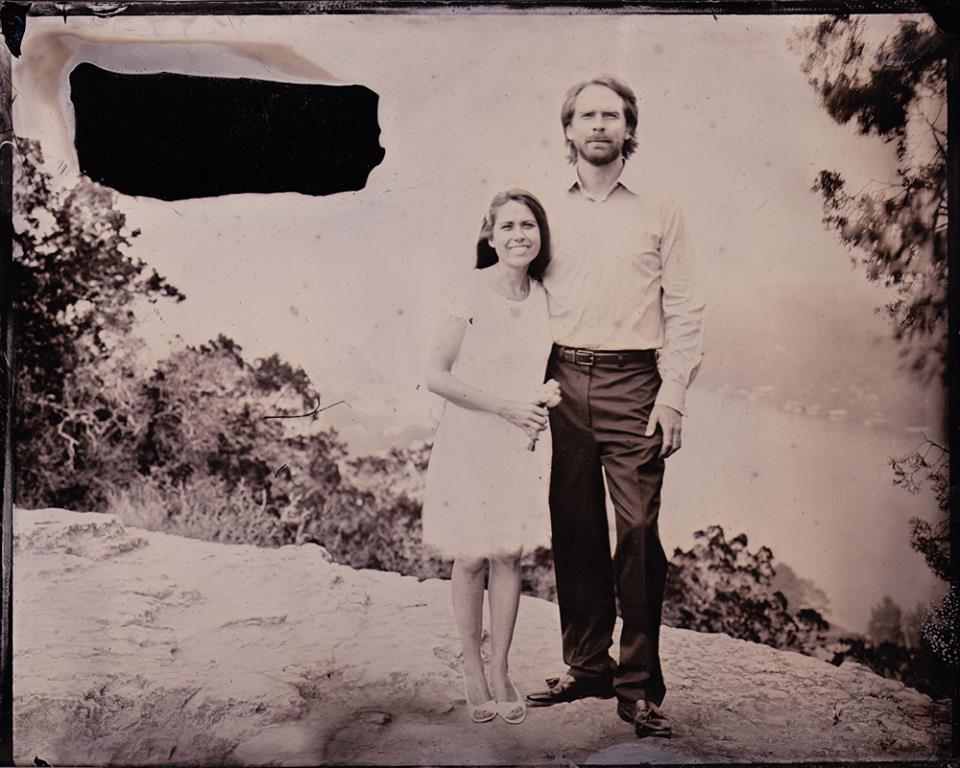 Film’s not Dead: What is the technical process you have to go through to produce one photograph?

Lumiere Tintype (Adrian Whipp): First, we mix all the chemicals in-house. The recipes we use are an amalgamation of old recipes from the 1800s. Once we have the shot set up, we pour a plate with salted collodion. When it’s almost dry, we sensitize the plate in a bath of silver nitrate for a few minutes. This is where the red light comes on. After it’s loaded into the plate holder, we take it out of the darkroom for exposure. We use some pretty powerful strobes because collodion is barely sensitive to light. After we take the shot, we develop the plate in a ferrous sulphate developer. It’s a quick development process that we stop with water once the negative looks good. Then it’s everyone’s favorite part – we plunge the plate into the fix and watch the image appear. Unlike with film, we can watch this with this lights on so we really get to see the image coming out of the fog. After that, we put the plate through plenty of washing, let it dry, and varnish with sandarac. We add lavender oil to the varnish and heat it over an open flame, so that part of the process makes the photobooth smell incredible.

Film’s not Dead: What are your plans for the future for ‘Lumiere Tintype’?

Lumiere Tintype (Adrian Whipp): We’re pretty open ended, I see it going in any number of different directions. Right now, I’m most excited about people bringing their creative ideas to us. We have met so many people who want to share their passions with us. They want the things that they love to be captured on collodion. It’s amazing really – once you put it out there, all these creative folks come out of the woodwork looking to collaborate.

Film’s not Dead: The type of photography your doing takes a lot of dedication, time and love. What is it that keeps you motivated to keep going on this analogue journey?

Lumiere Tintype (Adrian Whipp): At this point, it’s about controlling the direction of my own life. This ancient analog process has given me the opportunity to build a business, a place to work, and the chance to create beautiful images. With that said, I still don’t think I’m very good at it. There are people out there doing such incredible things with collodion. I keep going because I’d like to be half as good as them one day.

Film’s not Dead: Thank you so much for taking the time to do this interview. Is there anything else you would like leave with the readers of Film’s not Dead?

Lumiere Tintype (Adrian Whipp): I’ll leave that to Bukowski: “Find what you love and let it kill you”.