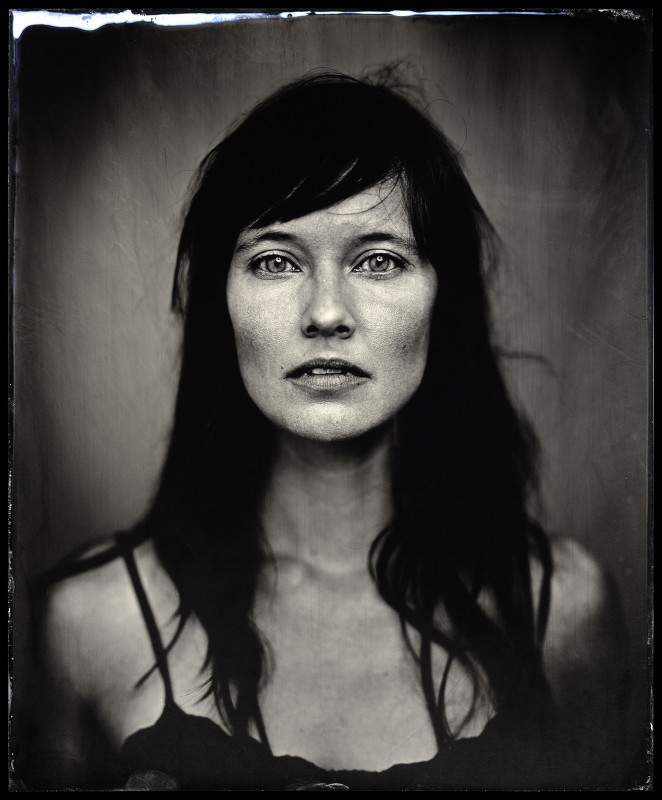 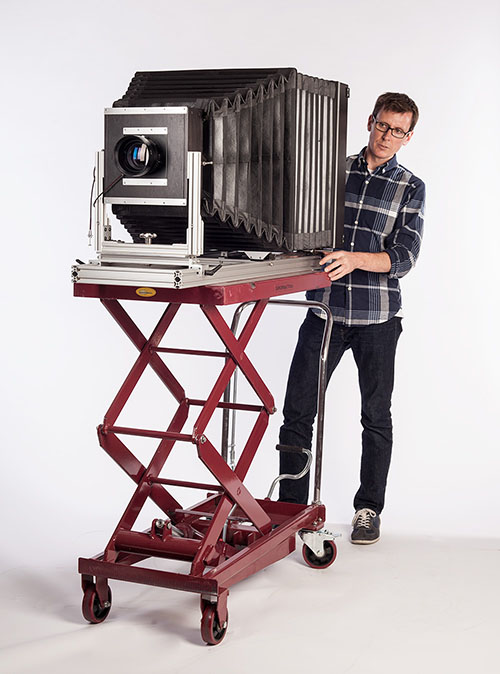 Tintype photography throughout recent years has grown in popularity creating a new buzz around this beautiful 19th century process. Michael Shindler spent six years learning this delicate process and by August 2011 he decided to put his new skills to work by opening the world’s first Tintype portrait studio called Photobooth on Valencia street in San Francisco.

We managed to catch up with Schindler to discuss The Photobooth SF, how he keeps his work fresh and different, as well as the new 17×14″ camera that he handmade:

Film’s not Dead: You started Photobooth in 2011, which is an amazing and beautiful photographic studio/gallery and shop where anyone can walk in from the street and get a one off tintype made of themselves. What inspired you to want to create this space?

Michael Shindler: I had been making tintypes for several years, I was completely in love with the process and the results I was getting, and was basically looking for a way to make more tintypes of people – and to do it every day. I thought that if I had a shop in the right location, with lots of people stopping in, I could charge less for a sitting and be doing a lot more photography. I also liked the idea of not always choosing who I photograph. When people walk through the door here, I have just a few minutes of talking to them to try to figure out who they are, and what I find interesting about them.

Making someone’s portrait is a very collaborative process; the subject has to be willing to give me something, to show me something of themselves, and it’s sometimes a struggle to get people to do that. I can’t make a good picture happen on my own. I’ve made thousands of portraits over the last two years at our shop and with each person, the session is over and done with in a single exposure. I’m constantly amazed by how well it usually works out. As a portrait photographer, it has been a fantastic exercise. I’ve learned a lot!

Film’s not Dead: Since opening Photobooth what has the reaction from the people in San Francisco been like?

Michael Shindler: It’s been great! When we first opened, we got a lot of attention for what we were doing and I was amazed by how people (even people who didn’t know or care much about photography) seemed to understand and appreciate why tintypes are different, and not just like regular photographs.

Over time, it has started to feel like I’ve photographed most of the people in the neighborhood, and our clientele has largely become people from out of town. Either tourists who have heard of us and wanted to visit, or visiting friends and family of locals who’d already had their own tintype made, and are now dragging people they know into our shop. Still, I think the newness has begun to wear off here and I’ve been enjoying travel to other cities to do weekend-long tintype pop-up events in new places. Partnering with new people in different places has been a great way to reconnect with my excitement with the process, because the excitement of others is contagious. 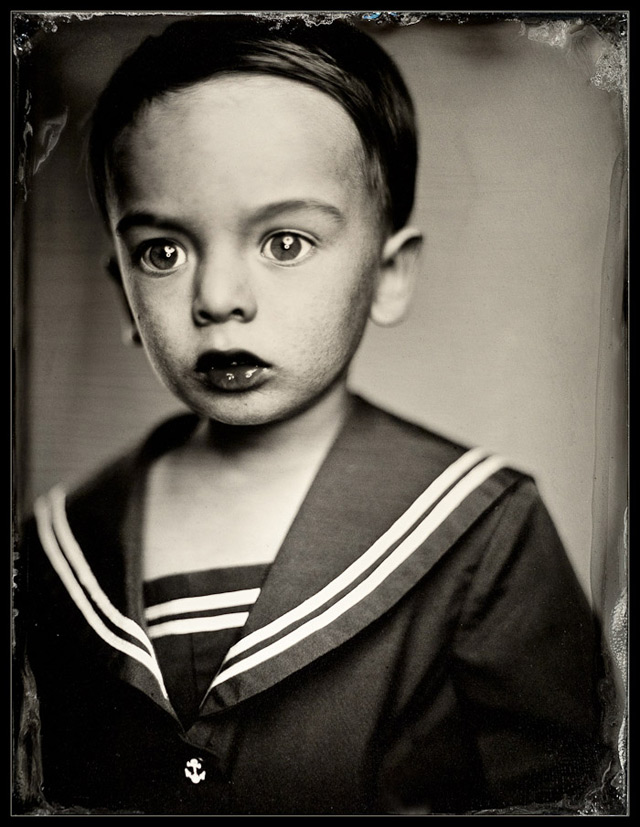 Film’s not Dead: What drew you to photography?

Michael Shindler:I first became interested as a teenager, and by my first year in college I had decided that photography was what I wanted to do. So, I never really looked back from that point. I do recognize that a big part of what drew me to  photography was the darkroom part –  the science and the craft of it. Making things has always been important to me (I’ve also done a lot of wood and metal work) and the feeling I get from being physically involved in the image making process is very important to me.

I think if I were growing up today, digital photography would not have the same appeal, and I’d probably just become a cabinet maker or furniture builder or something. When photography went completely digital, I did feel some kind of loss, and that is when I started looking for other photographic processes that would allow me to continue making things myself. But just sticking with film and photo paper wasn’t enough because I didn’t feel the results I got from that were actually any better or different than what I could get from a digital process (I’m sorry, but it’s true!).

Through tintypes, I feel like I’ve found something that really is different. Each plate is unique, like a painting, and cannot be reproduced. And, I make everything myself and no longer rely and the ever-dwindling selection of photographic materials made by companies that may not exist next year. So, I feel like I have true ownership of my process.

Film’s not Dead: Over the last few years creating tintypes has become a very popular process to use, what do you think makes your work stand out from others?

Michael Shindler: Yes, there has really been an explosion of interest in the process over the last couple of years, and I feel like I see tintypes everywhere these days. The secret is out: tintypes are actually quite easy to make! And, it’s been made even easier by companies like Bostick & Sullivan, who now sell pre-mixed wet-plate chemistry, supplies and equipment.

But how is my work different? Hmm. Well, technically-speaking, I’ve made an awful lot of these things and I have a certain amount of pride in being able to produce quality plates very quickly and reliably, and under varying conditions. So, I guess I feel like I’m a better/faster/cleaner technician than most people out there. Although, as an artist, I’m not sure that’s anything to get too excited about. As for the images themselves, I think I’m mainly interested in trying to capture something real, something genuine, some small sliver of truth about a person that escaped me in person. When it happens, it’s magical and surprising, for both me and the subject. But it’s a slippery thing to be after and I can’t always make it happen.

So, if there is something about that idea that comes across in my work, then I’d be very happy. I’m not really interested in artifice or costume photography (like dressing people up in steampunk hats with goggles), or just making pictures of attractive young women looking young and attractive. I often enjoy looking at that kind of work because it does make me feel something, but what I often end up taking from it (and I would say this about fashion photography in general) is a feeling of alienation – a glimpse into some other place that I am not a part of. I think this is because so much of what photography offers (especially digital photography) is the opportunity to present an idealised version of a the world, to show something in a way that is not real, and lately I’ve been drawn to the idea of trying not to do that. 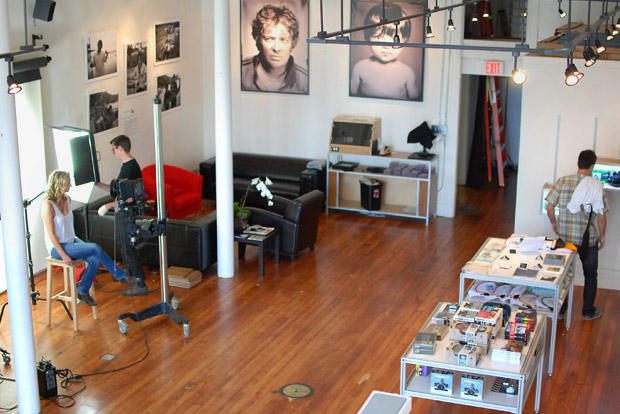 Film’s not Dead: What is the most enjoyable tintype you have made of someone so far and why?

Michael Shindler:My daughter, at age 4, in the backyard. Showing me her best self without even trying.

Film’s not Dead: Recently you started using a gigantic hand made 17×14 inch camera to create wet plates, what’s it like to coat such big plates and could you walk us through the technical process you have to go through to produce them?

Michael Shindler: It is actually not that much different from making smaller plates, just slower and messier. One of the reasons I chose that size was because I felt like it was as large as I could go and still have my work be mostly about photography, and not entirely about the technical difficulty of making giant plates. The camera, also, is quite easy to use. I actually find it better to work with than my 8×10.

Film’s not Dead: How long did it take you to make this beautiful camera and why did you decide to make it?

Michael Shindler: Oh, thanks! I think it is beautiful, too. I’ve been talking about making it for years, but it really just took a few months of working on and off to build it. I love making things, so having someone else build it never really occurred to me. Also, I had certain technical considerations (lens movements, magnification ratio, stability, etc.) that were important to me, so none of the “off the shelf” ultra-large format cameras appealed to me.

Film’s not Dead: More and more younger people are getting into film photography, if you could give them one piece of advice what would that be?

Michael Shindler: I think it is always important to consider why you are doing what you are doing, especially if it feels important to you. It is so easy to fall in love with something, only to find out years later that your reasons for loving it were not really your own. On the other hand, I think it’s incredibly valuable to spend some time experimenting with complete abandon, and not to bother with where that exploration is taking you, or why.  As it turn out, I seem to have only very general (and conflicting) advice to give. I’m sorry for that.

Film’s not Dead: Do you have any plans for the future for the Photobooth and your personal work?

Michael Shindler: Well, I want to keep doing the kinds of things that I’m doing, but for things to always feel new and exciting and different. So, I guess I’ll be working on that.

Film’s not Dead: Why do you choose to use this 19th century process and why do think it’s important?

Michael Shindler: To me, it just occupies this nether-region between digital and the tintype work I’m doing. And with film, the workflow generally becomes digital at some point anyway. So, I’m not really sure what film provides, other than some sense of romance for a bygone technology (And hey, I get that. Believe me.) But I’m 42, and I am old enough to have worked with film professionally for 15 years, so that sense of nostalgia isn’t really there for me. But I certainly understand why people continue to be interested in it, and why it has such appeal for people who are just coming to photography now.

Film’s not Dead: Thank you very much Michael for taking the time to do this interview with us! Is there anything else you would like to say with the readers of Film’s not Dead?

Michael Shindler: Thanks! Come visit us in San Francisco!