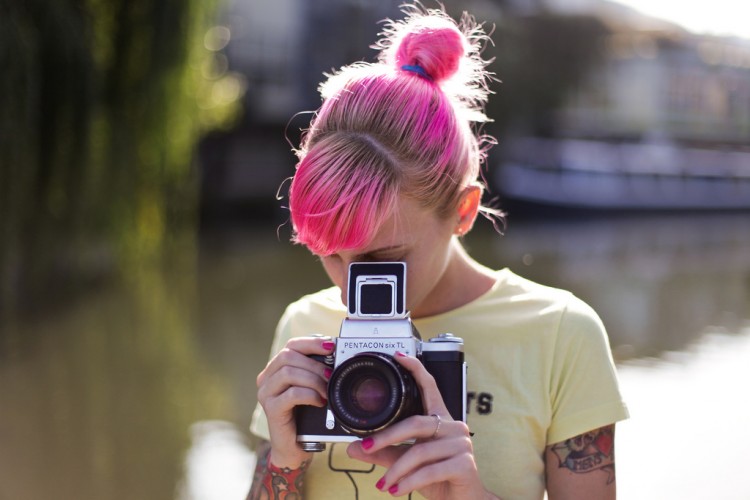 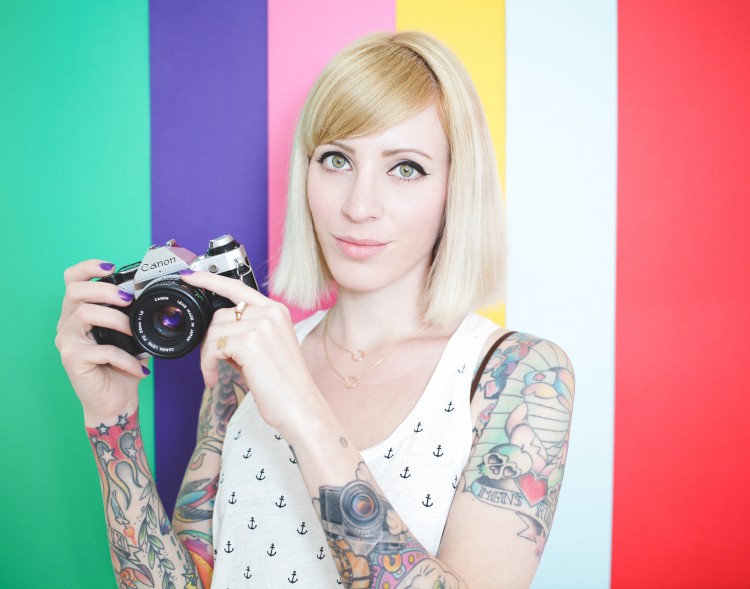 Inbar’s camera collection is a famous one – especially on Flickr, where she shares her analogue love under the name of 333Bracket. This pink-haired lady has caught our eye – and many others – showing off her collection and colorful shots on the online community, and the fact she’s our fan doesn’t hurt either… Here’s a little chat we had with her – check for precious tips on acquiring analogue cameras and her main rule in photography!

Yéssica Klein (FND): Could you tell us a bit about yourself and why you decided to start collecting cameras?

Inbar (Bracket): My name is Inbar (aka Bracket) I’m 30 year old originally from Israel, currently living in London, England with my husband & our mischievous cat.

I haven’t really “decided” I’m gonna start collecting cameras, it just happened I guess. My collection just grew rapidly until I woke up one day and thought to myself “oh, that must be a small collection up on that shelf now isn’t it…”

Yéssica Klein (FND): What would you say your favourite camera is and why?

Inbar (Bracket): It’s like asking a mother who is their favourite child – almost impossible to answer! but generally speaking the Hasselblad 501CM & Canon AE1 are among my favourites for the simple reasons that you can’t beat a hassey standard, and the AE1 was my very first SLR, so she holds a special place in my heart. Recently I acquired a Polaroid Land 250 which has also become one of my favourites!

Yéssica Klein (FND): To build up such a large amount of cameras can take some considerable amount of time and expense. How long has it taken you to collect these cameras and do you know how many you have?

Inbar (Bracket): It was shortly after I moved to the UK in 2006 when my obsession with acquiring more and more gear really started to “bloom” and sadly for my bank account, it has been flourishing ever since.

I’ve reached 94 cameras in my last count, I try keeping track of them all on my Flickr (linked at the bottom of the page) sometimes I do forget, but a large chunk of my collection is listed there in detail.

Yéssica Klein (FND): If you could choose any camera in the world to add to you collection which would it be?

Inbar (Bracket): The Leica M7 – she’s the definition of PERFECT. 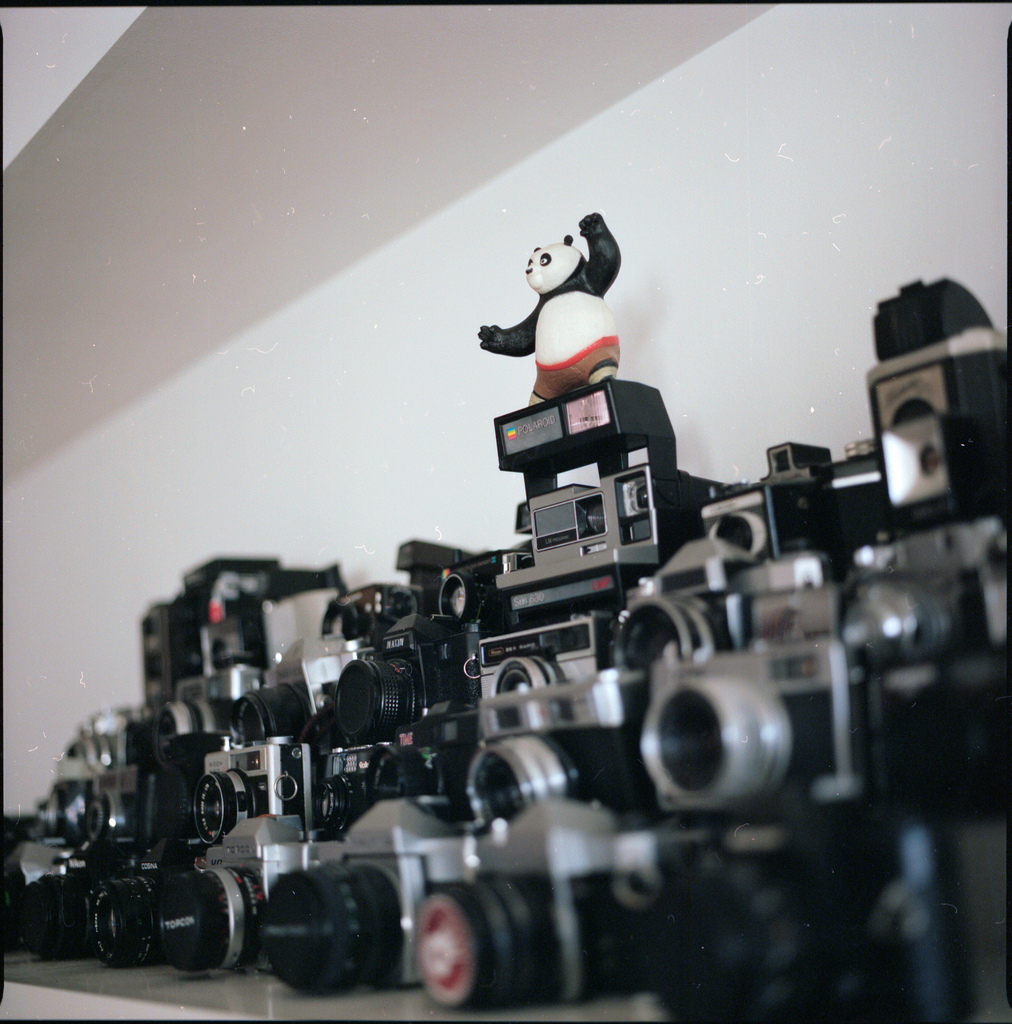 Yéssica Klein (FND): Do you at all use these cameras to shoot on, if so what is it that you photograph or does it depend on the camera?

Inbar (Bracket): I’d say I use at least 70% of the cameras in my collection I use day-to-day.

I shoot whatever I want on whatever camera I put my eyes on first when I stand in front of my collection shelves, the only camera which is a bit excluded from the rest is the only digital one in my collection – the Canon 5DMKII, which doesn’t leave the shelf as often as her friends because she’s mainly used to shoot conceptual work.

Yéssica Klein (FND): If you could give any aspiring collector some advice and what to look out for when buying, what would that be?

Inbar (Bracket): I guess time is the key to everything. At the beginning when my collection was rather small I was really clueless, sometimes I bought overpriced cameras or real damaged ones, but with years comes experience and now days I know how to get bargains, or if I ever stumble across a real gem which happens to be broken or missing some bits, I’ve self taught myself how to fix and bring it to back life – this saves me whole lot of money! The best places to hunt for cameras are old antique/street markets where you can actually hold the camera in your hands and inspect it, where places like eBay are definitely the worst!

Yéssica Klein (FND): Digital has rapidly changed the way photography is used yet we’ve seen a large resurgence back to film. What do you think the future is for photography?

Inbar (Bracket): There will always be the Digital vs. Film debate, but I guess that no one wins. I shoot & like them both, well, maybe I enjoy shooting on film a tiny bit more but still, I hope that in the future we will have some sort of harmony between these two medias because they’re both equally important! Analogue photography is how everything started and digital photography is the future, so I think they should both remain attractive to photographers. 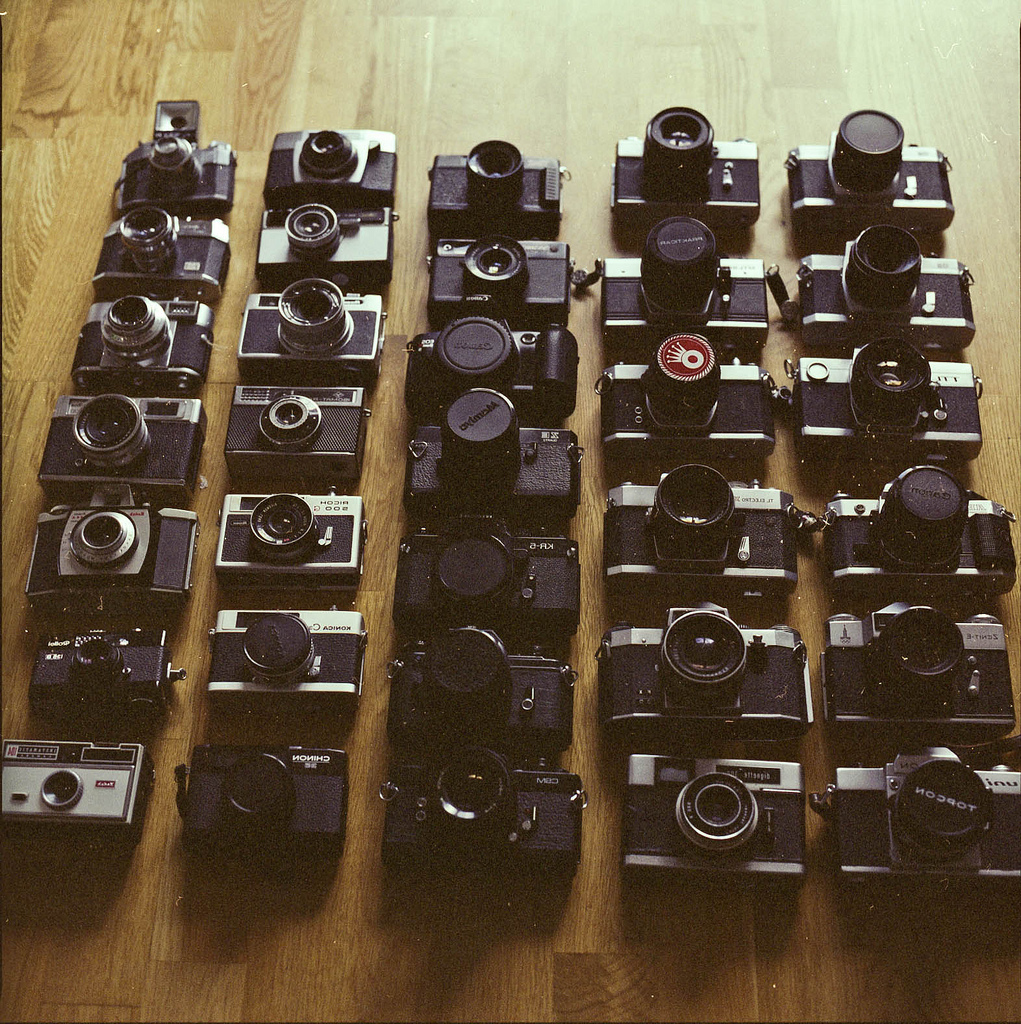 Yéssica Klein (FND): Is there anything else you would like to say to the Film’s not Dead readers?

Inbar (Bracket): I have this stupid (yet very important) rule of shooting at least one photo a day, and no, taking one million pictures with your iPhone doesn’t count. If you want to better yourself and expand your knowledge in photography, get out there and start shooting, nothing beats a daily hands on on your gear!