The Darkroom on Wheels – The Photo Palace Bus Revisited 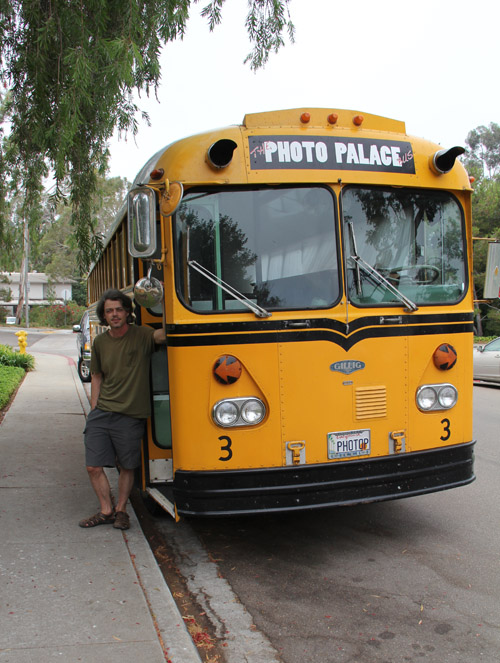 It is a one of a kind orginal 35ft 1978 Gillig school bus that has been transformed through an extremely time consuming process to create this analogue heaven on wheels. Anton for the last year has been travelling to different parts of America spreading the love of analogue photography to everyone he meets!

We were able to catch up with Anton to discuss what has changed over the last year and about his latest campaign on Indiegogo:

Anton Orlov: I am an avid darkroom printer and love everything to do with manual photography techniques. When I envisioned a traveling darkroom for the first time I thought of it as my personal creative space that would enable me to travel and create art at the same time.

That was a while back and since then digital imaging has all but destroyed a very old and beautiful photographic craft of working by hand to create a final print.

Today The Photo Palace Bus is an ambassador for film. This gorgeous 1978 Gillig school bus has been remodeled to house a full size darkroom capable of making prints up to 16x20in and a presentation space where people from all walks of life can become better acquainted with the long and rich history of photographic tradition.

This bus travels the country and offers short informal lectures to all those who step aboard in hopes of elevating the public level of appreciation for analog photography. I also give private tutorials, demonstrations and lectures in darkroom techniques as well as various other methods of printmaking. I intend on staying on the road as long as possible and reach as wide of an audience as I can with this message of hope for film photography.

Film’s not Dead: How has the last year been and what feedback have you received from the public?

Anton Orlov: Last year was tremendously fun and exciting. 2012 was the year when The Photo Palace Bus went from being just a dream of a single darkroom hermit to being a real tangible force in defense of film photography. As a test run I drove the bus for more than 9.000 miles from California to Maine and back. All along the way I met with an overwhelmingly enthusiastic reception from photographers, art communities and those who know nothing of photography beyond which button to push when you want the picture to appear. I was happy to dispel the general notion that people seem to have the film is no longer available, showed people instant imaging products by Fuji and Impossible Project, encouraged building of new darkroom facilities and much more. The feedback was very positive and I hope I inspired some of those who met me to take a class in their local college or high school or just to go and dust off that old 35mm and load it with film and see what they can get out of the experience.

Film’s not Dead: You have started a new fund on Indiegogo for the fantastic Photo Palace bus, would you be able to explain where this money will be going towards?

Anton Orlov: The Photo Palace Bus is meant to be a traveling show and that takes a lot of money to do. First off there is an expense of fuel for the bus and then there are times when I get hungry as well. In order to hold serious printing sessions I do need more than the 75 gallons of water that the bus can hold (though that’s enough for a demo or a small workshop), so sometimes I will have to rent RV-site spots and that can get pricy really quick. If the campaign reaches its goal I will also build a portrait studio on the side of the bus, which was always part of the complete vision.

That north-light studio will be used during workshops as well as for a creation of a portrait series by yours truly. In order for the studio to be done right it has to be custom made and, as we all know, that can get very expensive very fast. The complete vision for The Photo Palace Bus also includes a second story being added on the roof where bedrooms for the captain and the crew can be housed. If the funding campaign goes far beyond the set goal I will actually have the funds to do that – in that case I will be able to stay mobile full time in any climate.

Film’s not Dead: On your second journey around America you have said that you would like to compile a comprehensive survey of the state of analog photography today, what are you trying to show through this in-depth work?

Anton Orlov: I would like to conduct a series of interviews with the goal of inspiring those who have never considered using film to do just that. I will be looking for people who are truly passionate about their work and craft and bringing that passion to the public through my blog and, hopefully, in an eventual hard-printed book. Also I will visit with as many stores as possible to give people an idea of what businesses they can support locally. I would also love to visit manufacturers of film and chemistry and show to the world the state of that industry today. A survey like that would ideally serve as an added tool to inspire those who want to enter into the field of artistic expression via photographic means to consider doing so using analog means. 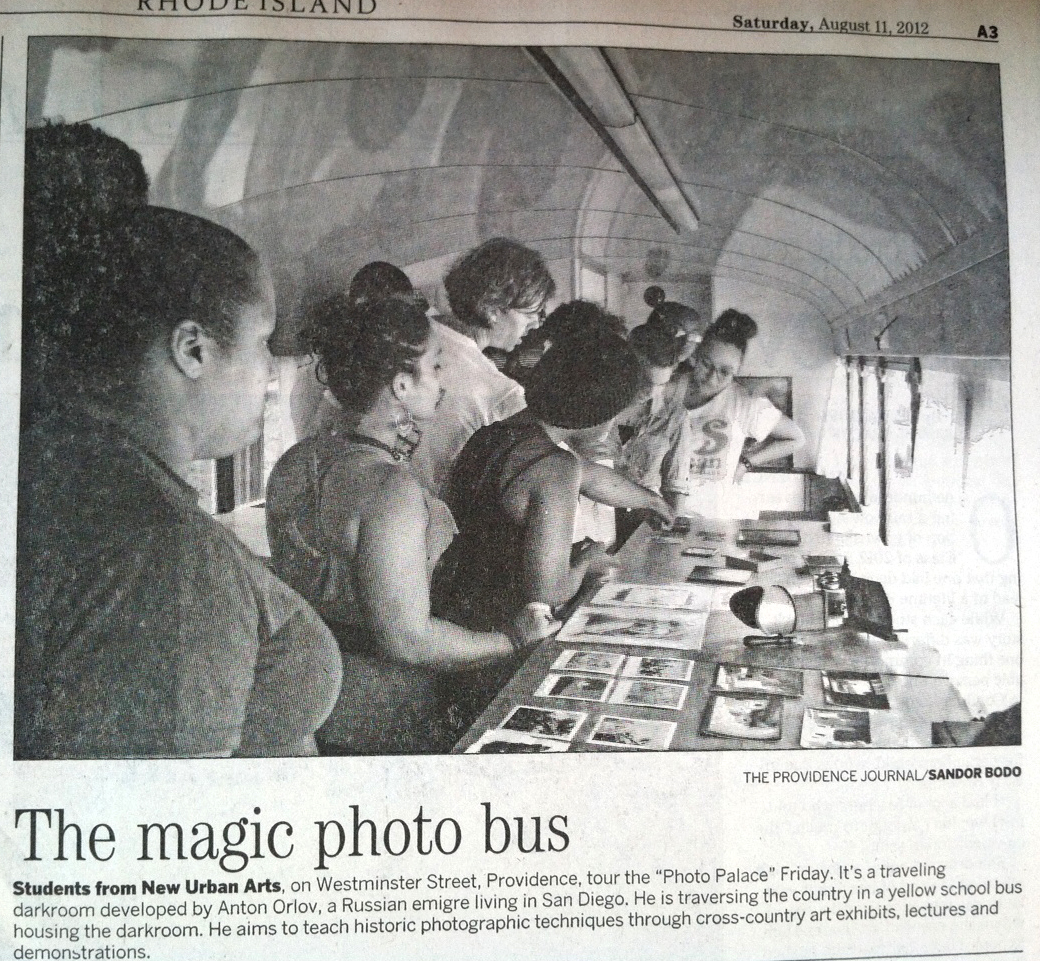 Film’s not Dead: You have travelled to a variety of destinations in America, which one has been your most memorable so far and why?

Anton Orlov: When I think about that upstate New York immediately jumps to the top of the list, though I have very fond memories of many other places. In NY I did have a pleasure of meeting with representatives from Kodak, I was lucky enough to get some personal time with Mark Osterman and was given a tour of the beautiful darkroom facility of George Eastman House International Museum of Photography and Film, and in Buffalo I was overjoyed to have my portrait taken by one of the best daguerrean artist of today Rob McElroy (shown below). The whole of the North-East part of the country was extremely receptive to this project and I look forward to spending more time there again. Truth be told though that my first journey was done at a rather fast pace and I didn’t get a chance to really explore too much and I’m very excited to set out on the second tour, take things much slower and explore the country much with a lot more attention.

Film’s not Dead: Where do you think analogue photography stands now?

Anton Orlov: I see it as being in limbo. On one hand the industry has been ravaged by digital technology – manufacturers that have been trusted for may decades have vanished and products relied upon by artists are nowhere to be found. On the other hand I see very positive and hopeful trends. There seems to be a new wave of excitement over film. The emergence of Lomography is bringing analog photography into a ‘play’ spectrum for a lot of new film users and perhaps some of those people will continue buying film long after the initial fascination with unpredictability of plastic cameras. Companies such as Freestyle are supporting manufacturing of paper and films and Impossible Project is working tirelessly on bringing back the magic of instant Polaroid film.

In all I think this is a transition period – while the olden-days photographers may be switching to digital because of ease and cost concerns, the younger generations are really happy to learn about film. To them digital imaging is no news, they grew up with it as a fact of life and they are used to a disposable nature of this consumer culture. To them a chance to get away from the keyboard and create something with their hands that will outlast them and their children is very fresh and tremendously satisfying.

I also think that the fight for photography to be recognized as an art form still continues and in time it will be manual printing techniques that will gain that recognition much easier than digital images. The level of deliberation and intent that must be present during the manual creation of a print, the time that the print spends in the presence of its creator, the knowledge and care exhibited by that artist – all those factors will help film photographers be recognized as artists rather than button-pushers.

Anton Orlov: On one hand the fact that every cell phone can now take pictures and those can be sent across the world has been transformative to the entire medium in a way that photography is now available to anyone at any time and that’s a good thing.

On the other hand I have to say that in general photography has suffered a big blow by the advent of digital imaging. The ease with which people can now be accepted as ‘professional photographers’ has dramatically decreased the level of acceptable quality of images. After being overwhelmed with the onslaught of mediocre and downright bad images people seem to have lost the ability to recognize quality and thoughtfulness that stands behind good work.

Another thing that does concern me is the sheer amount of images being created every second – where will those images end up and will anyone care about them 10, 50, 100 years from now? The ease with which data can be lost and corrupted, the various platforms for storing those images and the amount of passwords and security questions that are needed to access all of them – what will come of it all? It seems that people are not really thinking about that now, but it may be a question that their children and grandchildren will have to grapple with when they want to see images of their relatives and there are no hard albums to flip through. That’s why I pursue film photography and continue making tangible prints. 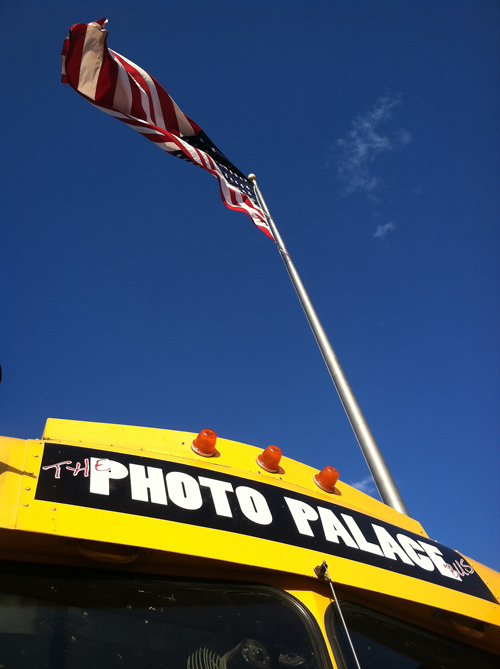 Film’s not Dead: If you could what one piece of advise would you give to aspiring photographers of today?

Anton Orlov: I would advise them to learn and pay attention to what they are learning. History is a repetitive thing and we can learn that fleeting fancies are just that – something that is soon to pass and tradition is something that is here to stay. I would advise them to pick up a film camera and try their best to consider everything in their viewfinder when they are pressing the shutter. I think film encourages a more thoughtful process to take place during a photo shoot and so I hope that they will learn darkroom techniques and become the next great photographers.

Film’s not Dead: Thank you very much Anton for agreeing to do another interview with us, is there anything else you would like to leave with the readers of Film’s not Dead?

Anton Orlov: I would like to thank Film’s not Dead for doing such a great job in keeping the film community together and keeping the hope alive in all of us.

I very much look forward to being on the road again and encourage those interested to contact me regarding a visit by The Photo Palace Bus to their community. I think the programs that will be offered will be popular with photographers and the general public as well.