The “Do Not Crop” Winner – Jefferson Chang 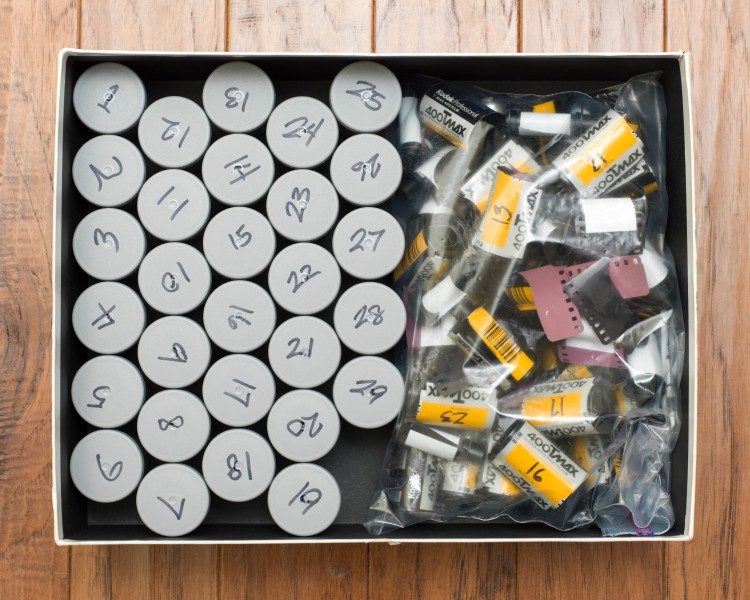 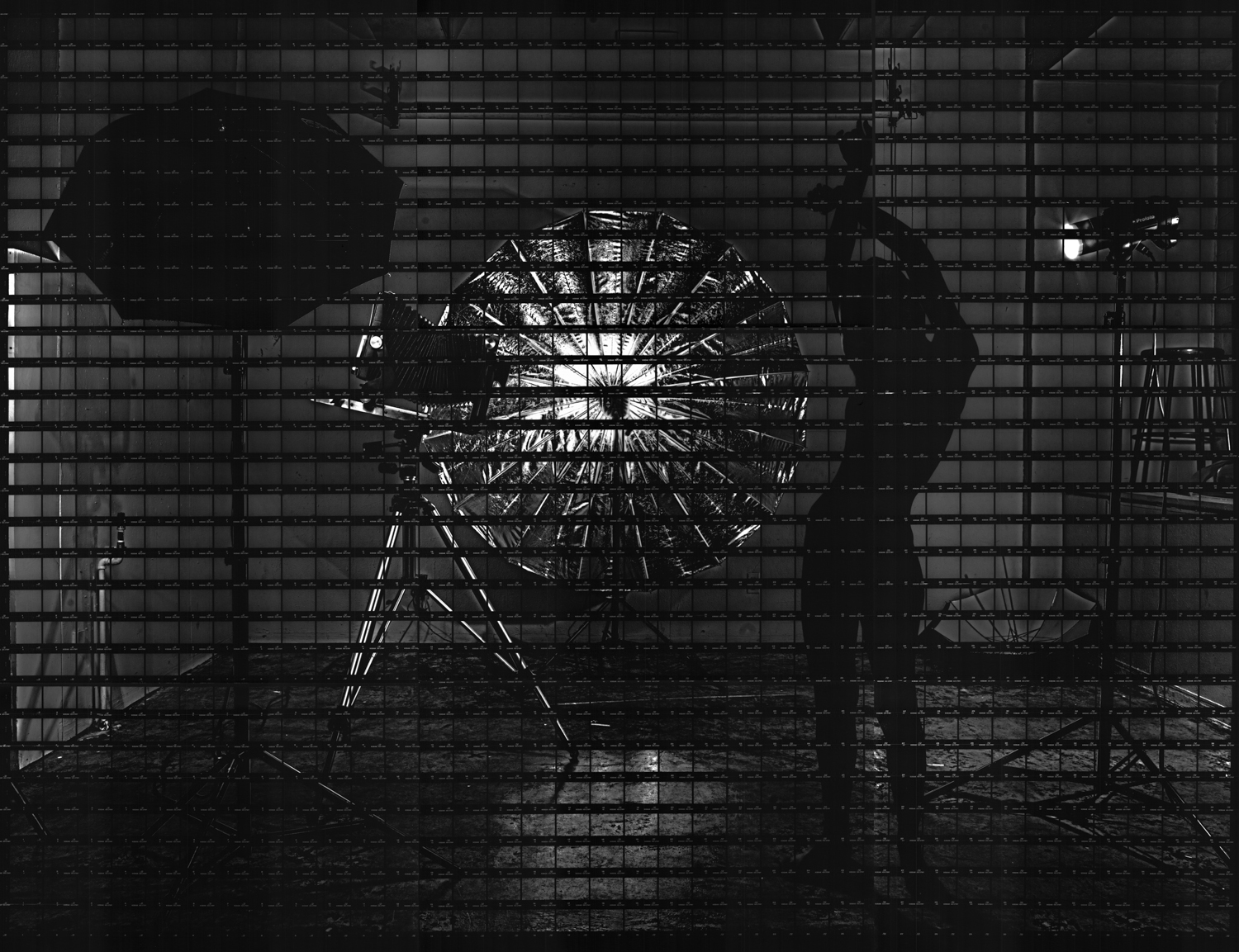 We are very pleased to present to you our next interview with the third winner from our Kodak Competition photographer Jefferson Chang from Oklahoma, USA! Photographers who submitted to this competition were asked not to crop their pictures in order to show off the rebate of the film. Jefferson Chang managed to pull this impressive yet questionable photograph out of the bag, from seeing it we were immediately intrigued and found it hard to believe this had been done without any ‘funny’ business. We were able to catch up with Jefferson Chang to get the scoop on this mind blowing picture entitled “1
kilopixel²” which used 29 rolls of 35mm Kodak TMax 400!

Film’s not Dead: Firstly a huge congratulations on winning the “Do Not Crop” Competition! Could you start off by telling us a bit more about yourself?

Jefferson Chang: Currently, I am a graduate student in Geophysics. I am a scientist, so what draws me into photography is the fact that almost 200 years ago, through a series of experiments, people were able to decipher a chemical cocktail that enabled light and time to be frozen. When you really think about it, that is something short of magic. It truly is. I am like a little kid who is infatuated by these little boxes that capture light.

Film’s not Dead: Your picture entitled “1 kilopixel²” became the winning image, we were completely mind boggled by it! How did the idea for this photograph come about and how did you go about putting this complex picture together?

Jefferson Chang: I pull from a lot of different sources when I think of a project. One of the thoughts that shaped the concept of ‘1 kilopixel’ was a quote, “showing your contact sheet is like taking off your pants in public,” by Henri Cartier-Bresson.

Contact sheets as the art piece itself has been done, so I wanted to do it a little differently. I wanted it all to line up, perfectly. Today, we are bombarded with imagery from everywhere. So much so that we probably tend to zip by and not really pay attention to the entire image. When something seems inexplicable, we just chalk it up to Photoshop wizardry and move on. I wanted to make something that makes people pause, examine, and talk about images.

The actual image is a bit tongue in cheek at photographic clichés: there is the classic three-light set-up; the fancy camera—in this case I went with an 8×10 view camera to give it some presence; and of course, you need to have a model.

Another key concept that is evident in the image is the number of frames; the image comprises 1044 frames of 35mm film. That came about, because a lot of people hyperbolize (digital) photographers for shooting a thousand frames, just to get one image. I wanted to exemplify that hyperbole. 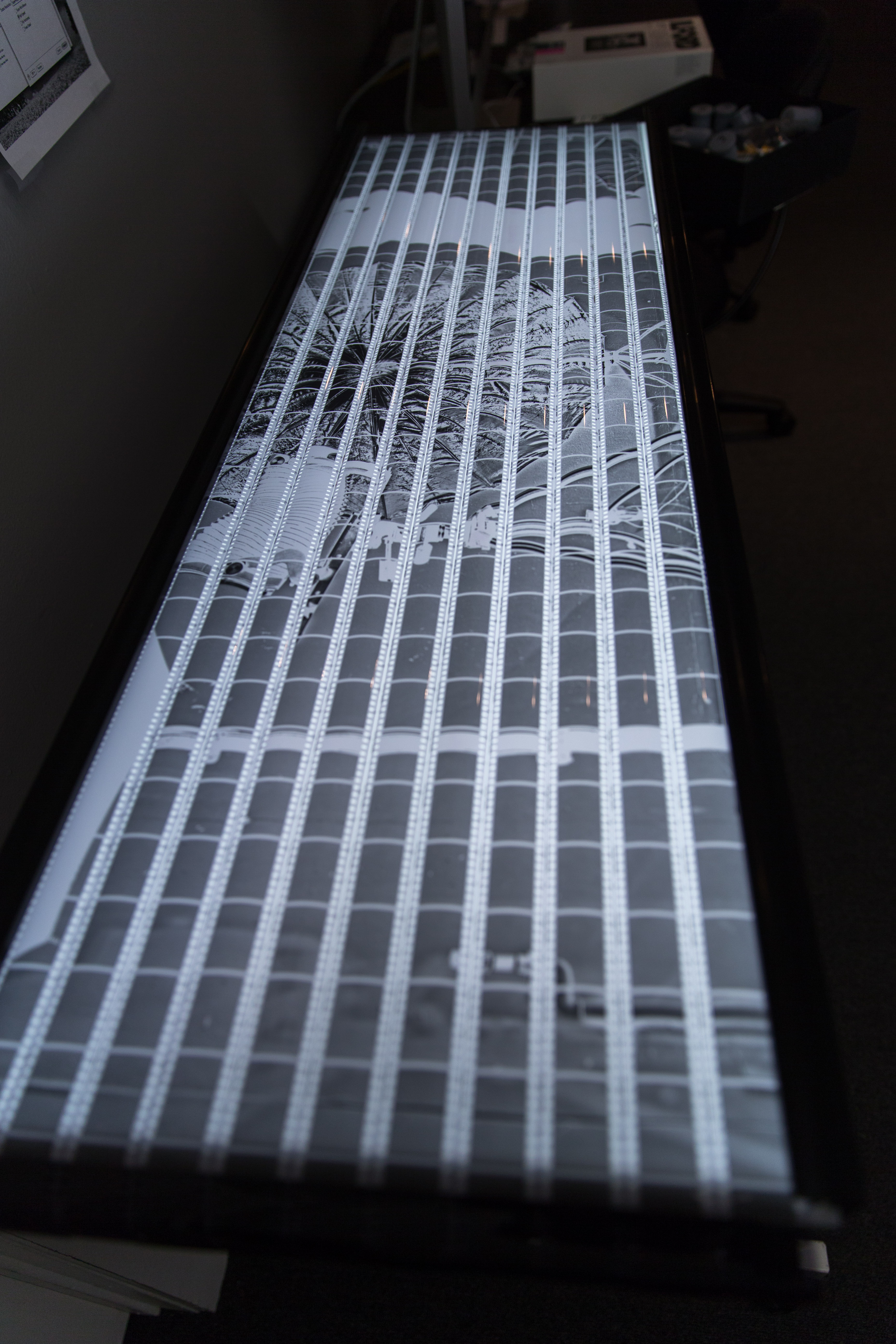 Film’s not Dead: Why did you decide to make this photograph and what was your motivation?

Jefferson Chang: I took my first baby step into photography in 2009, when my wife handed me here Canon Rebel SLR to take a picture of her, as she held up some green (olivine) sand. I thought, “Wow! A real camera!”—up until that point, I had only been shooting point-and-shoot cameras to document rocks in the field. I wanted to emulate those images I see in the magazines where the sand was in the focus, and she would be kind of blurry in the background. When we got the pictures back from the local photo lab, needless to say, the photo I took was not what I had in mind. Thankfully it was on full-auto, otherwise it would have been a complete disaster. From that point on, I decided to learn everything I could about photography, both, its technical and artistic aspect. I was obsessed.

Jump forward to the present, I am far from learning everything there is to learn about photography, but I am still obsessed by it. Lately, my projects deal with the ontology of photography from my perspective, mostly from online culture, but also from personal contact with photographers. One of the layers that I hopefully embedded in this project is an idea of obsession (and probably slight insanity): the obsessive pursuits of knowledge, the perfect camera, the sharpest lens, etc. To get each and every frame, and each and every strip lined-up is pure madness.

Film’s not Dead: You mentioned briefly that during the developing process the films were slightly solarised, did you do this intentionally or was it by accident?

Jefferson Chang: It was on purpose, just a quick flick of the light on and off. I had never done it before, but I really wanted to try it. I wanted to give the look of surrealism in the photographs that you can see in some of Man Ray’s images. But, because it was my first attempt at such a process, I didn’t know how long to expose the film. That’s the thing with film. There’s no hard and fast rule, as a lot of things depend on so many variables. You just have to experiment with it.

Film’s not Dead: What made you decide to use a Canon 1V to shoot this photograph?

Jefferson Chang: I chose the Canon 1V, because it was the only 35mm camera that I had with a motorised winder. I wanted to load the rolls of film automatically, for spacing consistency. My other film cameras are fully manual, which means I do the loading, and I’m not the most consistent guy. Although, I do cherish that I can squeeze 37 or 38 frames out of a 36-frame roll, due to my inconsistency.

Film’s not Dead: It took you an extremely long time to create this photo how did you manage to keep the person in your photograph still for so long?

Jefferson Chang: You are asking the wizard, to let you behind the green curtain! I don’t know if I can answer that. Only my model, Emily Maxwell, who is a very talented fine art photographer, will ever know… and whoever walked in the studio while I was shooting. Part of the point in this project is to get people talking about photography, and how the piece was created is certainly one of the more frequently debated questions. We get bombarded with so much imagery nowadays that what we are seeing hardly registers. I want people to stop and think about what they are seeing, form an opinion about it, and talk about it. 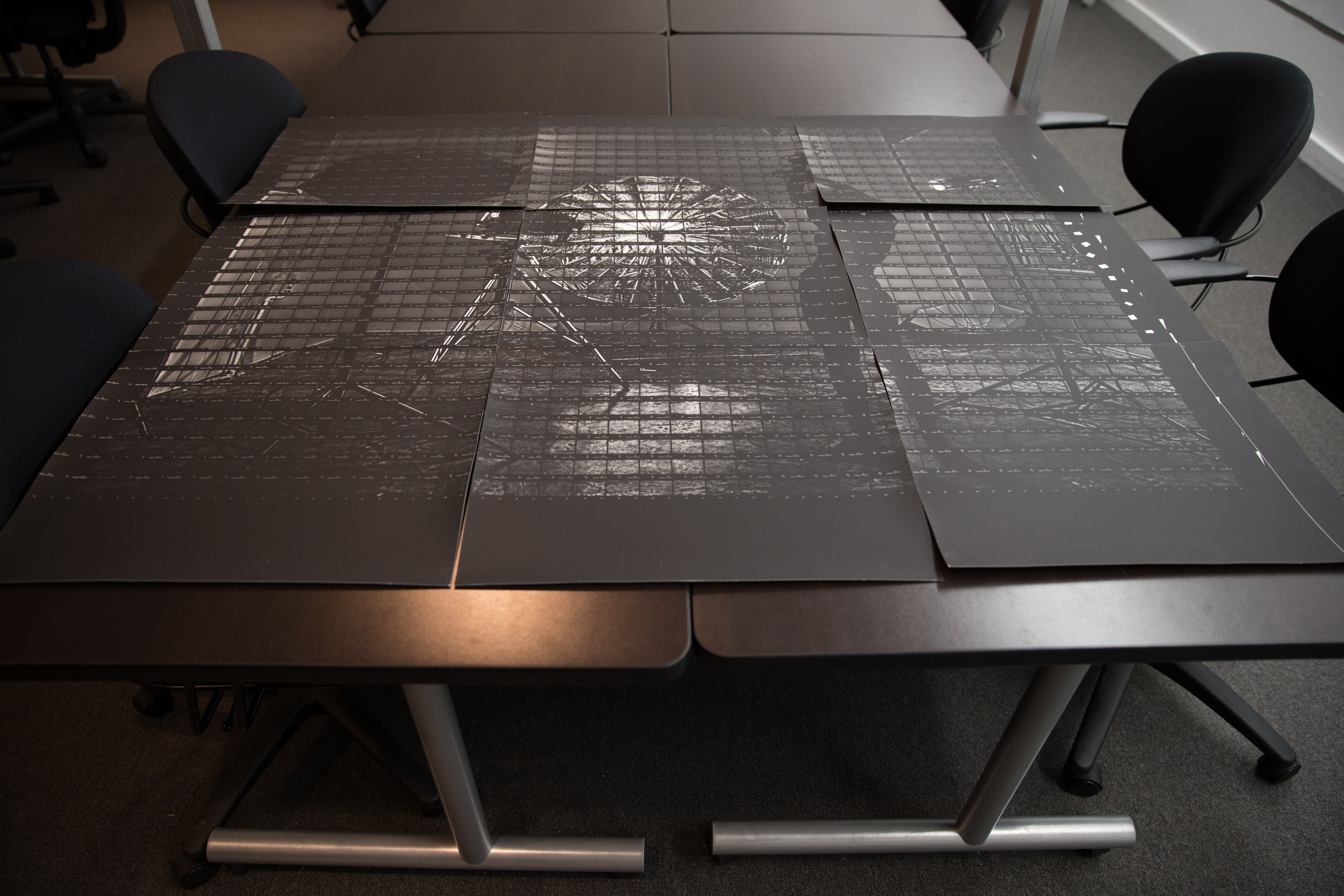 Film’s not Dead: You said you started to shoot film quite recently, what made you want to switch from using digital to going fully analogue?

Jefferson Chang: I did not completely abandon digital. I still own one digital camera, for when convenience takes priority. But, a large number of my cameras are film cameras in different formats. I made the switch, because when shooting film—traditionally—it is not a finished photograph unless it is printed. There is something about the tangible image that I miss, when I am shooting digital.

Shooting film requires light to turn silver halide crystals into silver ions, which are reduced to metallic silver during development. Afterwards, the process is basically repeated, where light passes through the negative in an enlarger (or contact frame), and converts the silver halides on the paper. There is this genealogy of light that you can imagine when printing traditional film.

With digital, the light gets converted into numbers, which are then reconverted into other number to show on a RGB screen, or a CMYK printer. The lineage of light is non-existent, and to me, it feels a little sterile.

Film’s not Dead: What is your favourite film to shoot with and why?

Jefferson Chang: That’s a tough one! I use different types of film as they excel in different aspects, but if I had to pick just one, I will have to say collodion tintype. Why it is my favorite goes back to this idea of light having a lineage. The tintype is the only process that I have ever done (I know there are others, but I have not done them), which the photograph is the final print itself. The finished plate that you have in-hand actually saw the light that reflected off of the subject. A well-made tintype is absolutely beautiful. Plus, it smells like lavender in the end!

Film’s not Dead: With the ever growing pace of technology and new digital cameras coming out constantly why do you think film is important?

Jefferson Chang: I can rattle off a number of generic reasons why I think film is important, but I will give you my philosophical take on it. I liken film to life. Much like having a handful of film in hand, we only get a finite amount of time in life. Film forces you to make each frame count. Once shot, you can’t delete that exposed frame. You can opt to not develop it, cut it out, throw it away, or reload a new roll or sheet and try again, but you cannot deny that that image (latent or developed) never existed. Much like a person’s history, we can ignore our history, but we cannot delete our past.

Film’s not Dead: If you had to give one person one piece of advise who’s just getting into using film what would that advise be?

Jefferson Chang: Find a good mentor. In my case, I have two really great guys who got me going: Ron Jackson, who got me started with the basics in addition to honing my conceptual ideas; and Andrew Strout, whose depth of knowledge of the medium is beyond immense. If you’re getting started in film, presumably your excited about it. I think excitement is contagious, and should be shared. If you find yourself a mentor who is already passionate about film that’s wonderful, but if you rekindle someone’s love for film, that is even more precious.

Film’s not Dead: Thank you so much for taking the time to do this interview with us Jefferson and congratulations! Is there anything else you would like to say to the readers of Film’s not Dead?

Jefferson Chang: Thank you for giving me and other film shooters the opportunity to show our work. Film is a magical medium that should be exercised regularly like a mechanical shutter to keep its time, so keep shooting!