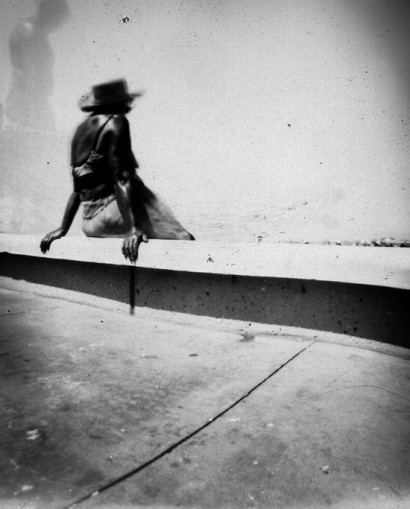 A few weeks ago, while on the Brick Lane, Backyard Market we bumped into Fotolateras, two brilliant women, Marinela Forcadell and Lola Barcia, who have been travelling to a wide number of different countries such as Berlin, Paris, Valencia, Rome, to document the life there using only an array of handmade tin pinhole cameras, as well as developing the paper negatives they produce in their hotel rooms while on their travels. So far they have been to over at least 30 different locations and it is still growing! Their ethos is that: ‘We do not shoot photographs, we ‘cook’ photographs.’

‘From our first cooked image from a tin, our madness about our work and the practise throughout these years, have helped us to be an artistic and technical team which work in the same direction. We obviously know what a digital camera is, the huge amount of storage that a memory card can have, the chances of the light, focus, the finishing touch, the very first moment of the last technique. But, even knowing all these things, we love cooking each image choosing the correct background, taking our time developing them. In a few words, we really enjoy spoiling each image we take, like spoiling a baby.’

We were able to catch up with Maniella and Lola to discuss their fascinating work:

Lola Barcia & Marinela Forcadell: Pinhole photography, from the way we practice it has meant a change in the way we see life. Spending many hours “cooking” pictures, thinking how during those long exposures an image is being formed inside the can, helps to slow down your life, your way of travelling and think that, as Mo Ti said, (philosopher BC Chinese SVI) ‘How is it possible for mankind to act properly if images are formed backwards in your brain?’

Film’s not Dead: How and where did you meet and how did you decide to collaborate on photography together?

Lola Barcia & Marinela Forcadell: From the day we met in a slum in Valencia, 5 years ago, we began to talk about photography. On one hand, Marinela was not only passionately fond about digital photography but also analogue, with a collection of the most interesting cameras. While on the other hand, Lola, an artist at that time, had learned the pinhole technique, along with three Valencian photographers and ‘Camera Obscura’ (a group of french pinhole photographers), a long time ago. Marinela was fascinated with her sophisticated, “complicated “, modern digital cameras, Lola laughed saying that to form an image from a pinhole was much easier to get: all that is needed is a can with a pinhole and photosensitive paper inside! Marinela could not understand it and challenged Lola to show and explain it to her. Then a period of searching, experimenting, began, with success and many failures until we were able to understand the technique fully. Since then we haven’t been able to live without it.

Film’s not Dead: Your project is a testament to photography allowing one to experiment with the medium in such a flexible way, with so many interesting and different outcomes. How long have you been working on this fantastic project for and how long has it taken you to perfect it to your expectations?

Lola Barcia & Marinela Forcadell: By April 2013, it will be 5 years that we have been obsessed with pinhole photography. We’re improving every day, and we have realised the way you make photography is not a mathematical science.

Although we have the impression that we have been doing the same thing for five years, when we look back, we realise the slow evolution of our images at the time of the framing, the choice of the topic, the “risks” when portraying someone. We have to be very clear from the first day we started, is that the pinhole world is as vast as any other, and that we would specialize in using photosensitive paper and would always make cameras from cans.

Lola Barcia & Marinela Forcadell: There’s an achievement in itself photographing as many countries as we can.

Another aspect in which we are working intensively is that we are trying to spread the message about pinhole photography at schools, Town Halls, art centres e.t.c, because as our lives are changing, we know the power of the pinhole is to open your mind and discover that advanced technology always develops from a simple and logical principle.

But the reason that moves us the most is to perform a simple life journey, with enough time to stop and look at life, allowing us to stop and observe, to meet people, to imbibe its experiences (as we did on a sunny Sunday in London when we met you) and we don’t want to travel with the stress like tourists who accumulate quantity versus quality.

Film’s not Dead:  Where did your idea evolve from to start travelling around the world using  just pinhole cameras to document the life in these various locations?

Lola Barcia & Marinela Forcadell: With digital technology, nowadays in a chip you have enough memory to capture millions of images. For us, taking a picture means carrying a can and inserting a single sheet of paper in it. The camera will take a picture, with the can tightly sealed, and the image will be revealed when it is developed to produce a negative.

The process, in the beginning was complicated, and from then we started to simplify it to allow us some mobility. On each trip we are continuing to improve the way we travel with our cans (40 units) (Photo: bath darkroom Rome 1) to form higher quality images.

With the pinhole technique we take a portrait of the time, the soul of the place and live the experience of making that picture, besides we have to add the excitement of knowing if, after that effort everything went ok. It’s exciting. We soon decided to travel even with a portable laboratory that we assemble in the bathrooms of the hotels where we are, in order to control the process every day and rectify any possible light measurement errors. (Photo: bath dark room Rome 2)

Film’s not Dead: What have peoples reactions been like to your cameras do they take them seriously or does that play in your advantage since they have no idea what is in that box?

Lola Barcia & Marinela Forcadell:  We have had all kinds of reactions and experiences and it is curious because depending on the country you are in, the character of people vary and their reaction to the pinhole camera too.

To give some examples: in New York nobody looked at us or said anything to us. We captured a series of neon light’s, which we would leave hooked up to trees or traffic signs and, while exposing the paper (30 minutes exposure ) we went to have a beer.

In Naples, on the contrary, in the Spanish Quartier, (Photo: Naples) men didn’t stop asking us ‘why that box was tied to a post and why we were standing at the same corner’. On the other hand, it also depends on the level of knowledge of each person no matter the place, as we did in Castellón, Spain, we mounted a pinhole can on top of a car, and a police car approached us. We expected the policewoman to come and tell us we were doing something wrong but she got out and said: “Your making a pinhole photograph?”

Film’s not Dead: When were your first encounters with photography?

Lola Barcia & Marinela Forcadell: Marinela, who got her first camera when she was 8 years old, on the day of her communion, she burst with a passion for photography and has always been buying and expermenting with fantastic countless cameras ever since, both analogue and digital. Lola, through her father, a doctor and researcher, has always been close to both photo cameras and video, but it was the Faculty of Fine Arts where she received her first photography lessons.

Film’s not Dead: When you are travelling around to these different locations do you make cameras along the way out of the things you find?

Lola Barcia & Marinela Forcadell: We walk in the supermarkets as if we have entered a photographic shop, seeing cameras everywhere, thinking that each size or shape is a new pinhole camera for our collection. For us it is a new goal, that is to say, if we need to take a picture with “fisheye”  lens we will need to find a round can, if we need a 50mm one, we will have to change the can. For example the Danish biscuit box offers us a panoramic.

So, travelling around the world we always try to find different “lenses” no matter the contents of the can (bins, biscuits…). When we discovered the panettone’s, a typical Italian Christmas sweet contained in a big beautiful can, we became so crazy, that we bought all the collections and we had our families eating panettone for a whole year!

Film’s not Dead: You have a very wide and varied collection of cameras, which one would you say is both your favourites to shoot on and why?

Lola Barcia & Marinela Forcadell: When we’re at home, or we have to produce specific photographs for a project, or a special portrait, we like to use different cameras from our collection. But when we travel or teach courses with a high number of people, we use three camera models, which have many identical copies and we are more comfortable when cutting photosensitive paper to size. Our “travel cameras” are 50mm, fisheye and wide.

Film’s not Dead: What is the most perculair pinhole you have made so far?

Lola Barcia & Marinela Forcadell: A year ago, in November 2011, we travelled to Marrakech. Due to the long exposure times for our photographs, it was difficult to photograph people there, unless we did a portrait and asked that person to remain perfectly still.

We brought along a trolley with 40 cameras inside and a tripod, so every day we were in the Medina, no matter the time of the day, we looked like tourists, so everyone was shouting cab? , or riad?. Being aware of how odd we looked, we made wonderful pictures of the Koutoubia and the splendid Minaret. We started to see that a puzzled man sitting on a bench was staring at us.

We have a name for these types of photos we make “spy photos”. It means, we place the camera on the tripod, uncover the “plug” that covers the pinhole and while “cooking”, we turn around, get a map out of the city and until the exposure time passes acting as if we are lost. When the time is over, we pick up our camera, cover the pinhole and continue on are way without turning backwards. On arriving at our riad (Moroccan house) and after developing the picture, we were stunned when we saw that the man who looked at us quite puzzled had not moved a muscle during the 70″ exposure , giving us a marvelous photo portrait.

Film’s not Dead: If you could give one piece of advice to an aspiring photographer what would that advice be?

Lola Barcia & Marinela Forcadell: We would say that photography is devoted to living life photographically, the resulting image is the result of the way you think, feel and experience, it will be the way you express your feelings to others, but what will really be imprinted on your soul, will be your ability to get excited before a scene, to see how the light shapes the world.

Lola Barcia & Marinela Forcadell: Readers of Film’s not Dead have to be romantic, sensitive, loving mechanics. You have to be patient, selective, pamper each photo as a unique work. Feeling that your passion for analogue photographs may seem strange to the world … so we tell them that we admire you, it’s been a pleasure meeting you and Long Live analogue photography!