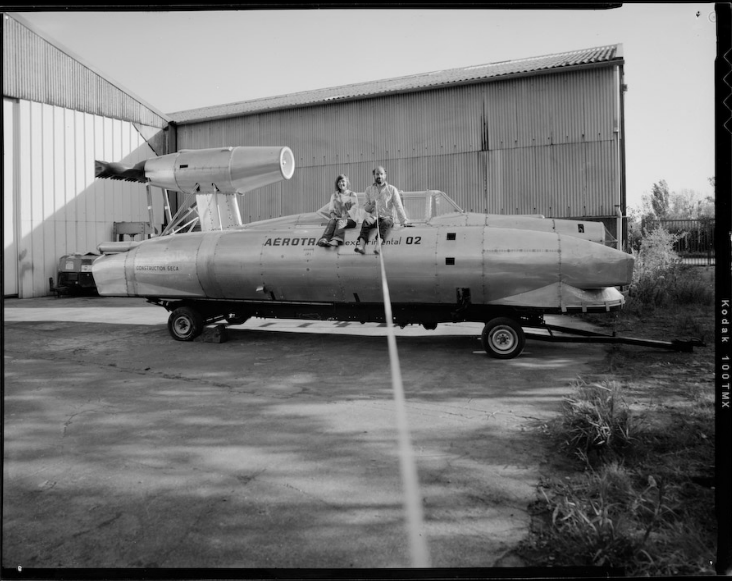 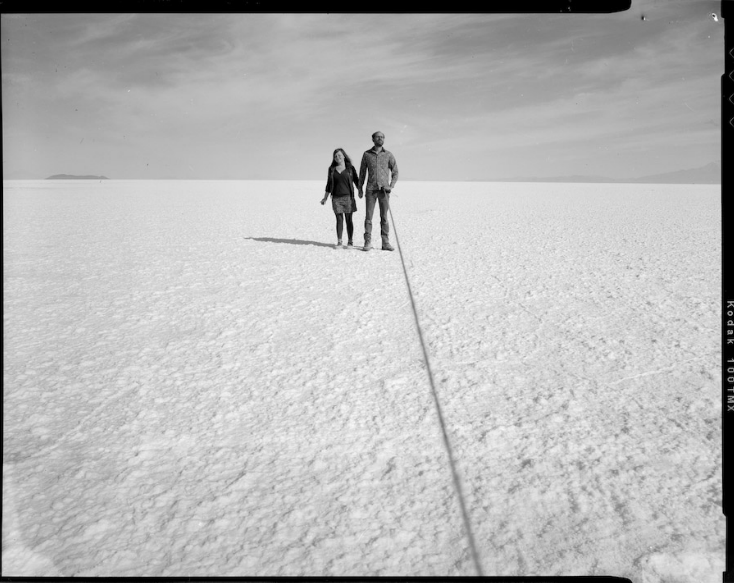 “Woolscapes” documents self portraits between a photographer and his wife in a variety of places, where ever they go the 4×5 camera follows closely behind. This project reveals so much about the couple and shows just how playful self portraits can be. We were able to catch up with Clément who told us more about his work and how this beautiful project began:

Film’s not Dead: To start with, could you please tell us where your love for photography began and why do you choose to practice it?

Clément Darrasse: I met photography in my early childhood, my father was a still-life profesional photographer mainly for advertising. He had his studio and laboratory next to our house. I was around 14 years old when I began using photography on my own, shooting and processing. My father gave me the 4×5 Linhof that I’m still using for my 18th birthday. As you can see I didn’t really « choose » photography but I had to travel a long way to make it a choice.

I entered fine art school and did many things but photography. In 1998, in Nantes Art school, I met a student who asked me if we could take a picture of his studio with my camera, we worked together doing night photography of public Works during ten years. When I left Paris for Lisbon in 2008 we stopped working together but I went on shooting, mainly by night.

Film’s not Dead: You’ve travelled to many different parts of the world photographing a variety of scenes. Could you please explain which place has been your most enjoyable to photograph and why?

Clément Darrasse: Travelling as always been part of my life. At first I would travel with a 35mm camera and later with a digital reflex. When I first travelled to India I came back with something like 500 digital pictures. I kept 20 pictures in my computer and never printed any of them. Then I decided to bring the 4×5 camera in my travels, whatever big and heavy it was. A few months later I spent two weeks in Greenland, I took 40 pictures, I kept and printed 38. In the last few years I took it to Greenland, to Canada, to India, to Chile, to Bolivia, to Ireland and to Philippines. In November 2011 I began to learn to be a light aircraft pilot with the project of taking pictures with the 4×5 camera while piloting. A lot of work and studies and technical challenges later, I made my first photographic flights this past spring.

After experiencing many shooting conditions, I can say that my most enjoyable moments appear when a very intimate connection exists between the place (its climate and configuration) and the camera. The most extrême conditions I experienced where in Greenland and for my aerial photography project. I was in Sisimiut during polar night, the temperature was -30°C, a heavy blizzard was blowing and snow was everywhere. Shooting, changing the film holder, rewinding the shutter and framing while piloting the aircraft implicates both aerial and photographical challenges. Each gesture as to be well thought to avoid hands freezing or crashing. I must abandonate some steps (with -30° the ground glass instantly covers with frost when I approch my face to set sharpness) and invent some others (in the aircraft the distance between the camera and the subject is setted using the altimeter). At this level, the picture is the result of a more or less well managed situation, like a footptint, and that’s what I expect in photography. In my work –composition- is the wrong word for –coherence-. 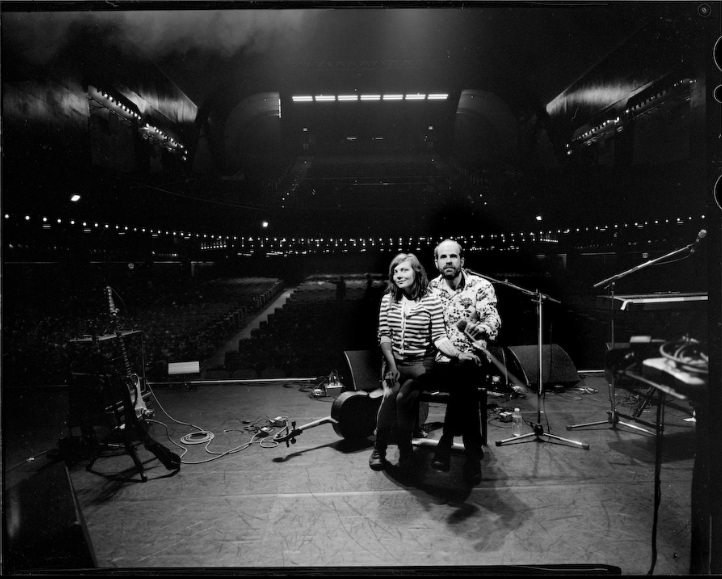 Film’s not Dead: The ‘Woolscapes’ photographs are beautiful, full of life and yet so simple, it makes the viewer feel more connected/engaged to you and your wife. What made you decide to do this project and how long did it take you to make all these wonderful photos?

Clément Darrasse: This project began in Greenland in December 2011, my wife and I were giving workshops there. As we were wandering around Sisimiut we ended on the top of a hill by the sea and my wife thought we had to make a portrait of us two. My camera has no timer but I guessed that if I could manage a string or something tied to the shutter it could work. From the workshop my wife was giving, a wool reel layed in her bag, I knitted it to the shutter, passed it under the rail of the lense and it worked.

After that we usualy took the oportunity of being available and equiped to repeat the process. With the time it has become a ritual, as some people may build stone stackings or simply take a picture of themselves in a specific place. We take these pictures where we are, when we can, as I usualy carry my camera with me it’s a good footprint of our life. Also, the wool trick products a special dimension to this serie. It focuses more on the event than on the place. It’s a picture of an action: The action of taking a picture. This dimension is fascinating to me and I can’t imagine the end of this fascination. I was very happy and proud to show the series in Toulouse during MAP photography festival in September. The exhibition gathered twenty of these pictures and people who didn’t know the work before could read it as a story. I think that a very good place for this serie would be a book, a book can travel in space and time.

Film’s not Dead: What were the challenges that you had to overcome with this project?

Clément Darrasse: I wouldn’t call this series « a project », it was not deliberate when it began and I’m not planning to end it. It’s closer to everyday life than to a well thought concept. And this is peharps the « challenge » that I had to overcome: To use such a big and slow to operate camera in daily life. That leads me to your 5th question.

Film’s not Dead: Large format photography can be quite challenging yet beautiful and a slow process. What are the benefits of shooting with such a large and beautiful camera?

First of all, I can say that when I met photography, digital didn’t exist. The interest of this tool that could link me to reality grew Inside of me together with optical, mecanical and chemical knowledges. This process makes sense for me. It’s about temperatures, water hardness, acid and base, doing very precise things in total darkness which is so rare nowadays and where my fingers are my eyes, feeling the preciousness of the picture and the « we will see » inherent to analogue photography which is completly fondamental for me. I remember that my choice for 4×5 vs medium or small format was not a matter of quality at all but more linked to a metabolism. Thanks to its cost, its slowness, it’s weight and its size, the 4×5 camera prevented me from taking too many pictures. This brings the picture building speed closer to my personnal sensitivity speed, I need time (and not only in photography). Also, working with the 4×5 camera helps me meeting many people. Day or night, in a desert or in a crowded city, there is always someone that comes to me asking « what are you doing ? » and we talk, and I learn things about the area, who’s living there, how it was before, what link they have with photography and what other places I should go to take pictures. This seldom happens with a smaller, faster, digital camera. 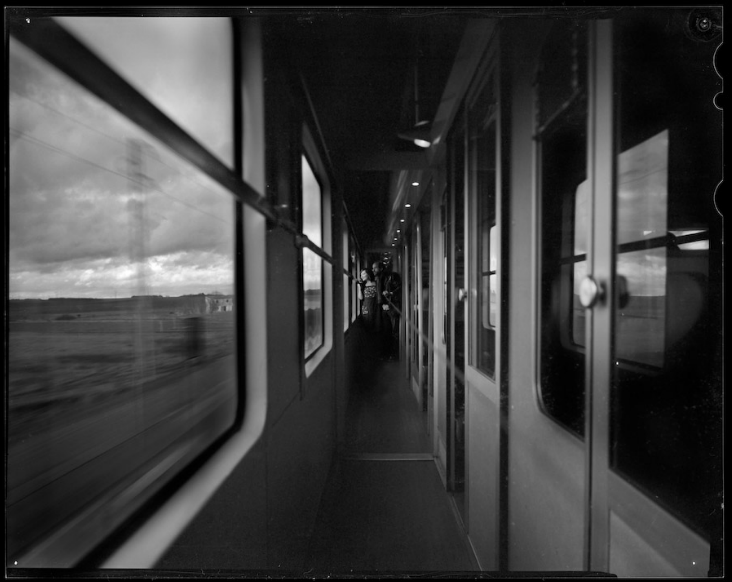 Film’s not Dead: Constantly with the likes of Instagram and Tumblr we are bombard with imagery. Who would you say are your top three biggest influences in photography?

Clément Darrasse: It’s hard for me to answer that question… It’s peharps not very sexy but most photographers I feel linked to are among the pioneers. William Henry Fox Talbot, Gustave Le Gray, Henri Le Secq. I’m also really touched by the work of Berndt & Hilla Becher. I like photographers who invent their tools, most of time, their photography become itself a tool in other fields as architecture, sociology, archeology..

But I’m peharps more influenced by filmmakers than by photographers. I feel very concerned by the technical and temporal dimension supporting an intimate contact with a story made by people and places. I think about Werner Herzog, Albert Serra, Chantal Akerman, Pedro Costa and the couple Jean Marie Straub & Danièle Huillet.

Film’s not Dead: How do you feel about the state of photography now and how has this affected the way in which you work or has it benefited it?

Clément Darrasse: It’s funny for me to see that after a digital supremacy, analogue photography is doing a great come back. My 15 years old son never understood why I was waisting time and money using such a big and slow camera but since a few months he processes black and white negative in his bedroom. I think that the most interesting of our time is to unable people to take advantage of various layers of photography history. I take pictures with sometime three hours of exposure, I process myself but I’m scanning my negatives and using internet to show my work. I’m not a purist. I find it great that each photographer can create his own chain of production from shooting to printing, picking techniques and tools according to his needs, his desires, his way of life. In the early 20th century my grand father didn’t have the choice.

Film’s not Dead: What are your plans for the future, do you have any other projects that your thinking about doing?

Clément Darrasse: I’m obviously in many projects. I began making portraits (this is really new for me) during parties, using my camera whithout tripod, it’s great physical exercise but it’s worth. Since a few days I’m working with colour but it’s still experimental and I can’t say more. In november and december I will have two e-books publications of my work. I want to finish the flying 4×5 project this year and in 2014 I will work in Portugal on a project by Sarah Adamopoulos who is a writer from Lisbon.

Film’s not Dead: Lastly, thank you so much for taking time to do this interview with us, is there anything else you would like to say to the readers of Film’s not Dead?

Clément Darrasse: Thank YOU very much for taking time to talk about my work.