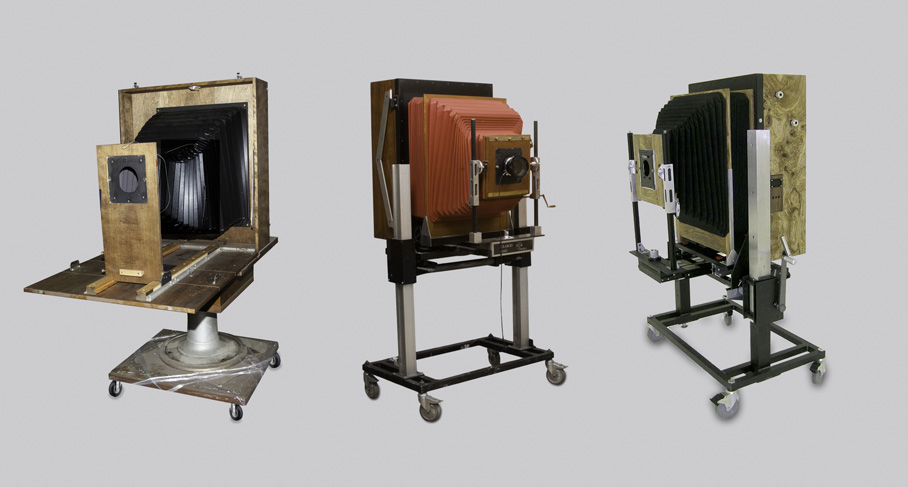 The one and only 20×24 Polaroid Camera/studio.

Polaroids were created by the legendary American engineer, Edwin Land, who brought us a whole new and innovative way of how to take photos, instant photography. Land started thinking about this invention after his daughter asked him why she couldn’t see the holiday snapshots they took together as soon as they took them. Plenty of fathers of course would like to have made that kind of wish come true, Land did. He wasn’t just an indulgent parent, he was an engineer and inventor of genius – a 20th-Century Edison. Land was said to wrap himself so intently in his work that his staff formed a barrier outside the front door of his office to prevent him from walking straight out into the traffic.

The first instant camera had to be manufactured with extraordinary precision so that a system of tiny rollers squeezed the developing chemicals out of the thick padded film at just the right rate. The science and the manufacturing processes were complex, but the vision behind them was simple: Land wanted to give families photographs that developed in their hands. In 1977 he had an artistic vision, based on giant studio cameras he designed – behemoths the size of bedroom closets that produced large format (20 x 24 inch) prints. Land gave photographers free access to these cameras and in return kept some of the prints they produced. This resulted in the Polaroid Collection, which was sold on the 21st of June till 22nd of June 2010 by Sotheby’s in New York. In 2011 there are only seven of these incredible gentle giants that still exist, five of them are still being used. These cameras weigh over 200 kg, are made of wood, and produce large format instant film images (20 x 27 1/2 inch) of such quality, that even upon close inspection do not show any film grain. Jan Hnizdo, an acknowledged photographer and former 20×24 camera operator for Polaroid made this unique camera available for Impossible Works. Impossible Works will make this camera as well as the new generation of 20×24 Impossible integral film available to instant artists all over the world, continuing the former Polaroid Collection principles.

It has been two years since 20×24 Holdings LLC took possession of the film inventory and production equipment required for large format 20×24 instant film from Polaroid Corporation. In that time they have set up production facilities in Dudley, Massachusetts and an inventory spooling and pod production facility in Putnam, CT. They continue to offer access to this technology through the rental studio at 75 Murray Street in New York City as well as the 20×24 Studio West in San Francisco. Film is also available to owners of 20×24 instant systems through direct sales.

The New York Studio is managed by Director of Photography, Jennifer Trausch. 20×24 Holdings LLC is managed by Executive Director John Reuter and between the two of them resides nearly forty years of experience in large format instant photography. Soon the 20×24 Studio will expand with two new cameras and a second NYC studio at the Film Society of Lincoln Centre. Trausch has operated the 8×10 and 20×24 camera for artists such as Chuck Close, Mary Ellen Mark and Julian Schnabel. For Impossible works Jennifer plays a vital role in guiding photographers worldwide into the fascinating but challenging world of instant photography. She is able to guide artists towards the possibilities and yet to be discovered techniques of this unbelievably delicate format.