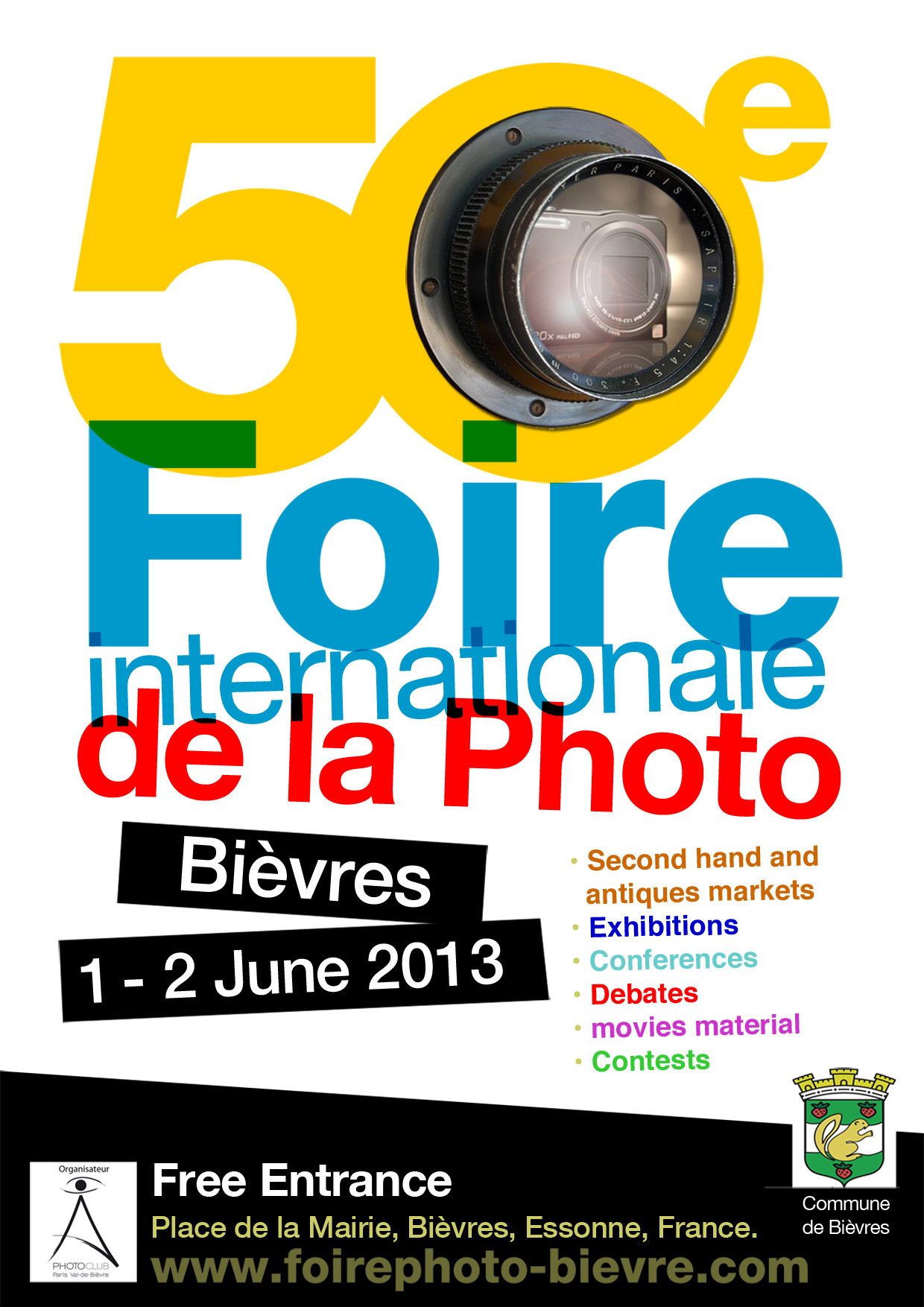 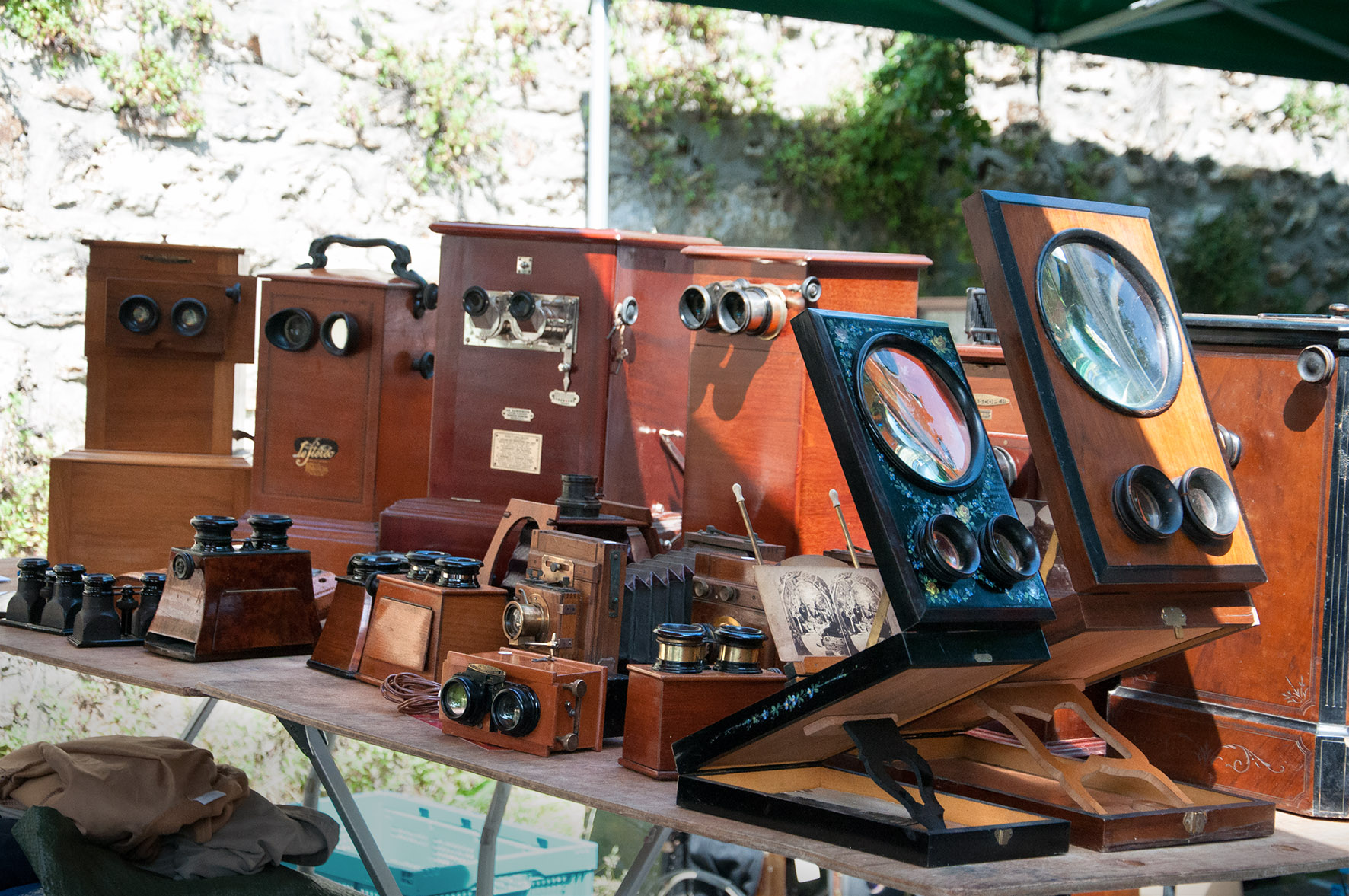 I hope you all have made sure that you have saved a lot of extra cash because this weekend is the Mecca of all photographic camera fairs! The Bièvres International Photo Fair in it’s 50th year! Only located 12km south of Paris, Bièvres is the place where herds of camera and photographic enthusiast come together to eye up the beautiful and large variety of cameras, photographic equipment and photographs on show. Additionally, the fair offers photography buffs a range of interesting lectures and conferences.

We were lucky enough to be able to discuss with some of the organisers of Bièvres Photo Fair about the event:

Film’s not Dead: Could you tell us a bit about yourself and how you came to organise the internationally acclaimed photo fair of Bièvres, also known to many as the “Mecca of Photography”?

Marie-Jo Masse (Organiser of  the Artist Fair): Upon my return from California, I became a member of the photoclub of Paris Val de Bièvre, creator and organizer of the fair. For 20 years I have been involved with the art fair, in one way or the other. I enjoyed very much exhibiting there and was rewarded with prizes on different occasions. When I became president of the club, in 2005, I had to hire a new manager for the fair and to begin to dive into the organization of the second hand market as well. It is at that time that we added international to the title since 35 countries are present on the grounds. It is also when we created the “Rencontres de Bièvres” : a set of conferences dealing with the digital aspects of photography, and also, now, with more social and historical aspects. After 2 years of leadership, the manager got involved in another project. That is the time when I presented Ava Brodsky de Gouttes, the actual manager, to the club’s board to take over. She had been member of the club for 2 years earlier and worked for several years on the fair as an appointed helper. She is also a photographer. She managed, successfully, the commercial second hand an antiques markets for the last 5 years, creating a new space devoted to photographic travel and edition. I am no longer president but still the administrator overlooking the whole fair and presides directly to the organization of the artist’s market. I keep many activities within the club and still find time for photography and sculpture!

Ava Brodsky de Gouttes (Organiser & Manager (Antique & Second Hand Market, Rencontres Photographiques de Bièvres): I’m a photographer (still using film !) & was a member of the photoclub when I went at the Photo Fair for the first time, ten years ago. It was great & I loved it. Every year I went to the Fair, & was working in the Photo Club team with the organiser. Then, when the organiser moved , the photo club proposed me to manage the Fair, & I said yes. I’m managing the Fair for 5 years now. It’s a huge thing & a lot of work but when exhibitors & visitors tell me how much they’re happy & they thank me about that, I have the feeling that I did a good job.

Film’s not Dead: The fair has reached a pinnacle year, being that it is the 50th Bièvres Photo Fair! Over these 50 years how has the fair changed and developed?

Marie-Jo Masse (Organiser of the Artist Fair): Jean and André Fage created the fair in June 1964 as an art fair. This was pioneering in France at that time. Well known photographer, such as Man Ray and the group of XV, exhibited at the fair. The museum was inaugurated the same day. The second hand and collector markets were created years later and the “rencontres” in 2006. Three years ago we added a special area within the market dealing with travel, printing and edition. Selling of images at large (ancient prints and books) through the channel of galleries, is developping fast, compensating for less second hands photographic material because of the arising of digital photography. This is possible because we doubled the number of covered booth. Nevertheless, the antique market remains very important and is world recognized for the quality of its offer.

Ava Brodsky de Gouttes: The photoclub follows the news & we brought the high tech at the fair with lectures & workshop. So, you can find everything about photography (old proccessing, digital stuff, vintage photographs, books, collectors items). At the antique & second hand market that I’ve in charge, we have about 300 exhibitors (dealers, but also non-professional who come to sell cameras & so on)

Since i’m in charge of the fair, I’ve got more foreigners : 30 % of the exhibitors at the antic market, mostly from Europe, but also from North America (USA, Canada), Asia.

Film’s not Dead: The fair has been going strong and growing in popularity since 1964. How did the Bièvres Photo Fair begin and why do you believe it is important to keep this fair going?

Marie-Jo Masse (Organise of the Artist Fair): The fair started as an idea of the Fage father and son, that photograpic artists had no way to show their work. So, they negociated with the mayor of Bièvres to use the market booth. The first fair, inaugurated june 7th 1964, was somewhat improvised, with prints hanging on strings as pieces of clothing. The story is that Man Ray, who exhibited there, sold several prints for a small price. Some made a good deal on that day! The second hand and antiques market started some 10 years later, out of need : Members of the club desired to sell used cameras. Other amateurs joined and then professionals and, from years on, it became essentially a professionnal and specialized fleemarket. One of the first at that time and the largest in France, a very important one in Europe! As far as I know, the only one in open space with birds singing.

This fair became a meeting place for photographers from the whole country and also from Europe. We begin to see many Chinese and Japanese have been familiar with this fair for years. Photography is now part of the identity of the town of Bièvres with the museum, the fair and the photoclub. The first week-end of june is the rendez-vous and festival expected by many photographers, as there is no other of this kind. It is uniquely part of the french photographic landscape.

To maintain the fair, we enlarged the offer these last years, by starting a set of conferences, adding, thanks to the city, more space that allows now for important photographic exhibitions and for saturday night, a musical animation which theme is Brazil this year. The city organizes around this theme many animations in various parts of the town.

The fair has been organized by the Photoclub de Paris Val-de-Bièvre for 49 years and we are very proud of it. It is fully part of its life, many members exhibit their production there. It is a time of high activity in the club, participating in its “the join together” atmosphere. For exemple, the club organizes a temporary studio, with our partner for printing, where poeple passing by are photographed and leave with a print. It is also a way to subsidize the club.

Film’s not Dead: Are there any other plans for the future of the Bièvres Photo Fair?

Marie-Jo Masse (Organise of the Artist Fair): Yes! we keep it alive! we should have more space both for exhibitions and for selling next year. Not everything is formalized yet, but be sure, the fair is there for a long time.

Next year, we will celebrate the 50th anniversary of the artists market and will have new space for exhibition. It should be a great festival. Take note and save the date of 7 & 8 of june 2014.

Film’s not Dead: Is there anything new that the visitors of this years Photo fair should know to look out for?

Marie-Jo Masse (Organise of the Artist Fair): Yes! We increased the number of formal photographic exhibitions from one to 4, we started a portfolio study and we renewed with auction of photographic antiques. There will be many photographers exhibiting silver prints and practicing ancient processes.

Ava Brodsky de Gouttes: Last year the NHS (Nikon Historical Society) decided to organise their yearly convention in Paris because of the Fair & 60 NHS members, from all over the world have been visiting the fair & enjoyed their journey. 2013 is the 50th edition so we tried to make something special. I organized a big auction sale on Sunday (vintage photographs & antique cameras) The town hall organises exhibitions & brazilian music concerts At the 6th Rencontres photographiques de Bièvres, we’ll have lectures & workshops on Saturday & Sunday

Film’s not Dead: Thank you very much for taking the time to do this interview with us . Is there anything else you would like to let the readers of Film’s not Dead know about the Fair?

The International Photo Fair at Bièvres is the biggest event of its kind in France and one of the most important in Europe. Collectors, photographers and image lovers at large, from around the world meet there. A large public, curious of discoveries attends the Photo Fair and participates in the numerous attractions.

Photography under all angles

The Fair is above all a huge used and antiques market that covers about 4 acres.
Professionals, amateurs, collectors and strollers can find there a large spectrum of old material: cameras, movie-cameras, lenses projectors and accessories as well as books, vintage prints and documents. With more than 300 exhibitors, the Fair is a open museum that offers a number of out of the way objects and treasures for those
who know to hunt and find them. The Fair is known the world over for the richness, quality and variety of the spectra at offer. It is also a means to become familiar with ancient processes: daguerreotypes, collodion and ambrotypes.

This event has evolved with time providing a spot for new technologies through conferences debates and shows: The 6th Rencontres de Bièvres will deal with the various aspect of photography: digital, travel and history of photography, as well as artistic aspects.

Le Musée Français de la Photographie, also created by Jean et André Fage, will organize a debate on “amateur practice” and will show within their booth a history of the Fair.

If you can’t make it to the fair here below is a virtual glimpse of the beautiful Mecca!