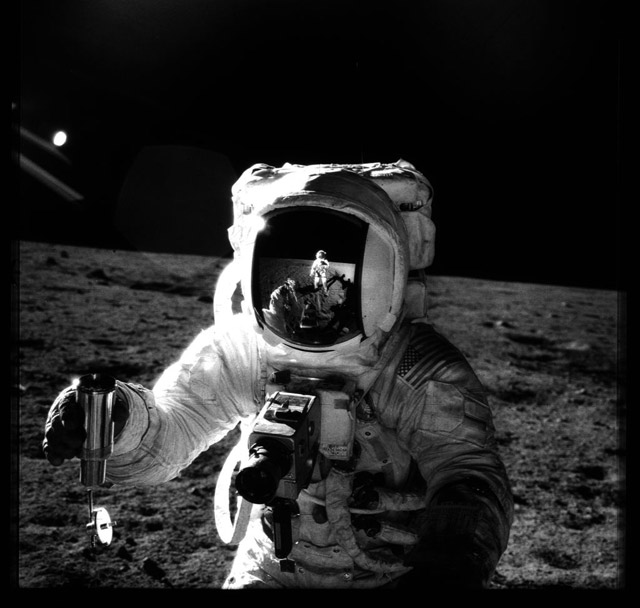 Hasselblad – The first camera on the moon.

In 1969, NASA completed the Apollo 11 mission, landing a man with a Camera on the Moon for the first time, this was a ground breaking moment in human history and technology. Hasselblad was involved in researching and producing a Moon Camera for the mission, which was called the Hasselblad Space Electric Data Camera EDC, The Space Camera. This camera is a tailored version, adapted from the Hasselblad 500EL with a few modifications; these include being stripped of its traditional leather covering, the mount for viewfinder, the mirror and secondary shutter, and adding a magazine for loading 70mm film in open spool with a wire handle attaching to the dark slide.

The first camera in space was also a Hasselblad, the Hasselblad 500C, with a planar 80mm lens, was the first Hasselblad camera to be used by NASA in space. It was purchased by the astronaut Walter M. Schirra from a camera shop in Houston, Texas prior to take off. Its not surprising that the Hassalblad was the first camera ready for an out of this world experience , they were and still are unmatched on build quality. Modifications by NASA technicians were further refined and incorporated into new models by Hasselblad. For example,the development of a 70mm magazine was accelerated to meet the space program. The first modified (in fact simplified) Hasselblad 500C cameras were used on the last two Project Mercury missions in 1962 and 1963. They continued to be used throughout the Gemini spaceflights in 1965 and 1966. A general program of reliability and safety was implemented following the Apollo 1 fire in 1967, addressing such issues as  safe operation of electrical equipment in a high-oxygen environment. EL electric cameras were introduced for the first time on Apollo 8, a heavily modified 500 EL, the so called Hasselblad Electric Camera (HEC) was used from Apollo 8 on board the spacecraft. Three 500EL cameras were carried on Apollo 11 these were the precursor to the extensively modified Hasselblad EL Data Camera (EDC), equipped with a special Zeiss 5.6/60 mm Biogon lens and film magazines for 150–200 exposures, which were used on the moon surface on the Apollo 11 missions.

If you would like one of these cameras and haven’t got $50-100,000 lying around there is a way, apparently the Astronauts left one camera on the Moon to shed weight before they journeyed back to Earth! Good Luck!