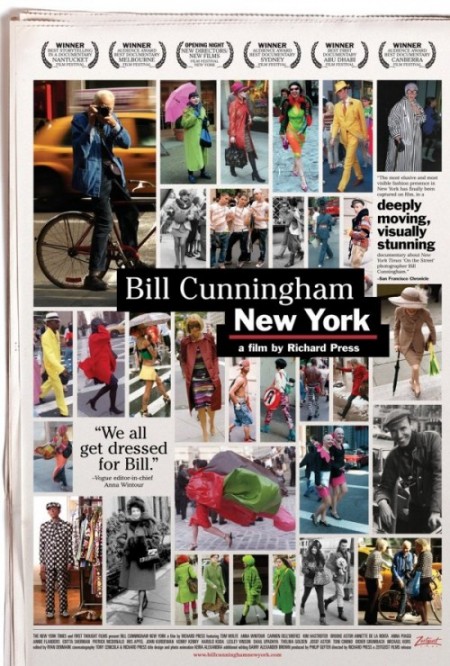 “We all get dressed for Bill. It’s one snap, two snaps, or he ignores you, which is death” ..” – Anna Wintour

William J. Cunningham, an outgoing and innovative fashion photographer for The New York Times, known for his candid street photography of fashion, documenting the ever changing trends in the billion pound industry.

‘Cunningham’s enormous body of work is more reliable than any catwalk as an expression of time, place and individual flair. In turn, Bill Cunningham New York is a delicate, funny and often poignant portrait of a dedicated artist whose only wealth is his own humanity and unassuming grace.’

In 1948 Cunningham had dropped out of Harvard University and started a new life in New York, where he initially worked in advertising. Not long after, he quit his job and struck out on his own, making hats under the name of “William J.” After being drafted and serving in the U.S. Army, he returned to New York and got a job writing for the Chicago Tribune. During his years as a writer, he contributed significantly to fashion journalism, introducing American audiences to Azzedine Alaia and Jean-Paul Gaultier. While working at the Tribune and at Women’s Wear Daily, he began taking photographs of fashion on the streets of New York. As the result of a chance photograph of Greta Garbo, he published a group of his spontanueous pictures in the Times in December 1978, which soon became a regular series. His editor, Arthur Gelb, has called these photographs “a turning point for the Times, because it was the first time the paper had run pictures of well-known people without getting their permission.”

Cunningham is drawn to the fashion of the streets not the people but the clothes. Most of his pictures, he has said, are never published. Designer Oscar de la Renta has said, “More than anyone else in the city, he has the whole visual history of the last 40 or 50 years of New York. It’s the total scope of fashion in the life of New York.” Though this extremely dedicated obession he has made a career out of unexpected photographs of celebrities, socialites, and fashion personalities. According to David Rockefeller, Brooke Astor asked that he would be invited to her 100th birthday party, the only member of the media honoured to be there.

This movie is un-parallel to any other photography documentary that I have seen, documenting a man who lives just for fashion and capturing it, he is a truly dedicated human being. ‘Bill Cunningham New York’ provides an insight into Cunningham’s  amazingly unique and creative lifestyle, living in a tiny apartment surrounded by huge filing cabinets, as well as hundreds of fashion books, living without some people would call the ‘essentials’ such as a kitchen! A man who gets on with his work, never seen without his beloved camera, obsessively documenting the style of those at the height of the social pyramid and those at street level, displaying an incredible contrast. Yet whether he is photographing Anna Wintour or photographing someone from the street, he treats them in all the same way, he takes no notice in status, frame and wealthy. The documentary also shows us how many invitations he receives to more events than he would ever be able to attend; at these prestigious events he will not accept so much as a glass of water. A self-contained man, who concentrates solely on his passion for fashion and his camera.

As well as Wintour being featured in the movie many other people are shown such as Tom Wolfe, Brooke Astor, David Rockefeller—who all appear in the film out of their love for Bill, explaining their history with the beloved photographer. On October 20th, 2011 this fantastic movie was announced that, ‘Bill Cunningham New York’ was one of five nominees for Best Documentary at the 21st Gotham Independent Film Awards, but we will have to wait to find out who the award go to when the awards will be announced on November 28th.

Click here to buy the movie or to find out what theatres it will be showing in, in America.