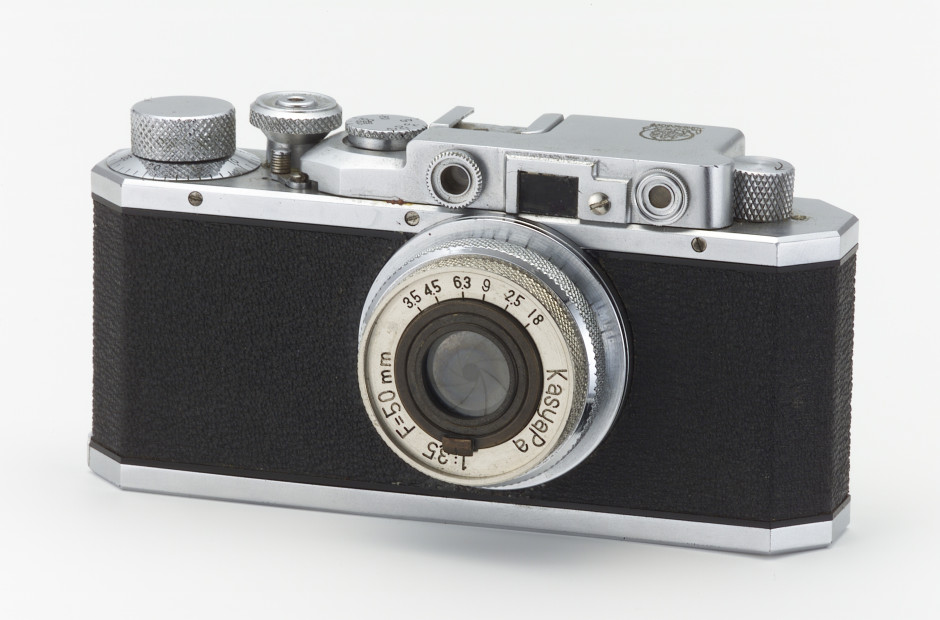 Marking Japan’s first 35mm focal-plane-shutter camera, which was produced in prototype form in 1934, was “the culmination of the dreams of engineers who wanted to catch up with Europe, the leading presence in the camera industry at the time,” stated Canon Europe in a press statement.

The camera was named after Kwannon, the Buddhist goddess of mercy. The hope was that her benevolence would shine down on the company in their technological endeavours. A symbol of the thousand-armed Kwannon was engraved in the top of the camera body. Furthermore the camera’s lens was called Kasyapa after Mahakasyapa, a disciple of Buddha.

Goro Yoshida, born in Hiroshima Prefecture in 1900, was behind the camera’s creation. As a child he “showed a keen interest in cameras, often disassembling and rebuilding them,” says the company. In a market monopolised by German Leica cameras in the mid-1930s, Yoshida took apart one of these cameras and believed it would be possible to manufacture the components in Japan.

Japan’s camera industry was outclassed technologically by Germany’s world-leading precision instruments. Japanese manufacturers were only just learning how to imitate cameras such as Leica and Contax. There was no competition in terms of price. The Leica was well beyond the reach of most of the general public. For example, the top locally made model, the Pearl spring camera, cost 49 yen. A D-model Leica with a 50mm f/3.5 lens was priced at 420 Japanese yen.

This gap in the market prompted Canon to develop inexpensive, high-quality cameras that would equal the best in the world. To help achieve this goal, Canon first established a precision engineering research laboratory. Using the technology available, it was extremely difficult to approximate the sophistication and quality of the Leica and Contax. Intensive efforts using the German cameras as models helped Canon researchers accumulate valuable ideas that led to the Kwanon.

In 1935, the company decided to highlight its objective of modern, high-quality cameras by dropping the ‘Kwanon’ spelling in favor of ‘Canon’, which means precision in Latin.

In 1936, two years after the birth of the Kwanon prototype and following much trial and error, Canon launched the Hansa Canon, its first commercial 35mm focal-plane-shutter camera marking the beginning of the Company’s history as a camera manufacturer.