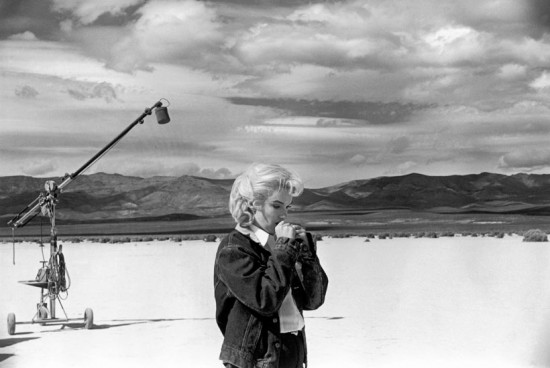 Open 7 days a week 10am – 6pm
Last entrance is 1 hour before closing time.

Over 60 years since the legendary cooperative photographic agency began, the Magnum photographers have borne witness to some of the most important moments in cultural history, recording the making of many of history’s classic films. This exhibition takes readers behind the scenes of cinematic masterpieces including Charlie Chaplin’s Limelight (with W. Eugene Smith), Billy Wilder’s The Seven Year Itch (with Elliott Erwitt), Nicholas Ray’s Rebel Without a Cause (with Dennis Stock), Orson Welles’ The Trial (with Nicolas Tikhomiroff), John Huston’s Moby Dick (with Erich Lessing), Joseph L. Mankiewicz’s Suddenly, Last Summer(with Burt Glinn), Andrzej Zulawski’s L’important c’est d’aimer(with Jean Gaumy), Michelangelo Antonioni’s Zabriskie Point (with Bruce Davidson) and Volker Schlondorff’s Death of a Salesman (with Inge Morath).

The exhibition, which has never before been seen in the UK, hosting 146 of some of the most recognised film images in the world. The collection features both classic and rarely seen photos of Hollywood’s finest such as Montgomery Clift, James Dean, Clark Gable, Katharine Hepburn, Charlton Heston, Dustin Hoffman, Buster Keaton, Klaus Kinski, John Malkovich, Marilyn Monroe, Gregory Peck, Anthony Perkins, Elizabeth Taylor, John Wayne, Natalie Wood and many more. The photographs reveal an unusual side to the activities of the agency’s photographers, and reminds us of their ubiquity in postwar culture.

Iconic actress Marilyn Monroe joins the prestigious collection in the emotive image of Eve Arnold captured in the Nevada desert whilst going over her lines for a difficult scene she was about to play with Clarke Gable in the film “The Misfits” by John Huston in 1960. There will also be some exciting original artefacts including Eve Arnold’s original Rollieflex, and Inge Morath’s Leica, not to mention original props, scripts and costumes. The photographers associated with Magnum have worked with movie-makers since its creation in 1947. Robert Capa, one of the founding fathers, had many friends in the film business – including Ingrid Bergman, Billy Wilder, and particularly John Huston – which gave him and other Magnum photographers access to the charmed and exclusive world of Hollywood. This connection to the film world has continued to the present day and widened to include movie-makers, directors and film stars all over the world. This exhibition, with its great variety of photographers and movie-stars is a real enchantment for all those who love both photography and the moving image.