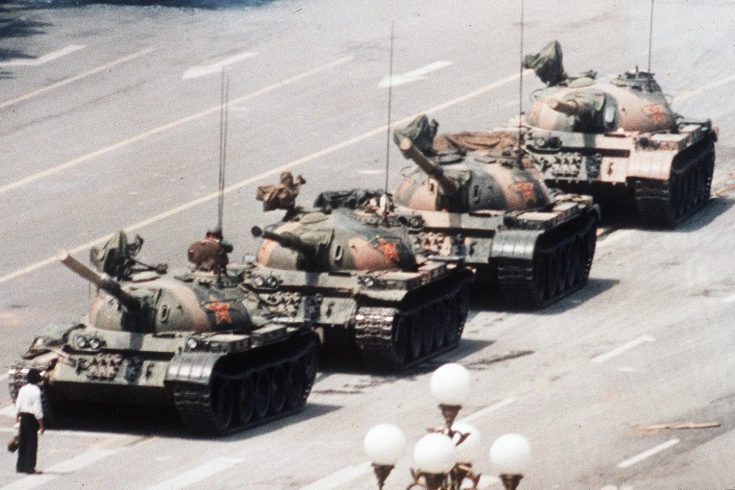 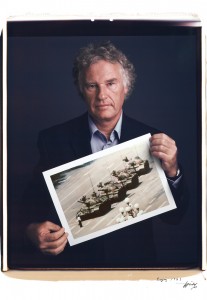 Twenty-three years ago on June the 5th, Jeff Widener ran out of film during the most important assignment of his life.

Tank Man, or the Unknown Rebel, is the nickname of an anonymous man who bravely stood in front of a column of Chinese Type 59 tanks the morning after the Chinese military forcibly removed protestors from in and around Beijing’s Tianamen Square in 1989, yet we still do not know who the man is. The man achieved widespread international recognition due to the videotape and photographs taken of the incident.

The brutal crackdown at Tiananmen Square was underway and Widener, a photographer for the Associated Press, was sent to the square to capture the scene. “I rode a bicycle to the Beijing Hotel,” Widener says. “Upon my arrival, I had to get past several Chinese security police in the lobby. If they stopped and searched me, they would have found all my gear and film hidden in my clothes.” But there, in the shadows of the hotel entrance, he saw a long-haired college kid wearing a dirty Rambo t-shirt, shorts and sandals. “I yelled out, ‘Hi Joe! Where you been?’ and then whispered that I was from AP.” Widener remembers. He asked to go to the young man’s room. “He picked up on it, and out of the corner of my eye I could see the approaching security men turn away, thinking I was a hotel guest.”

The young man was an American and his name was Kirk Martsen. Martsen had told Widener that he was lucky to arrive when he did as just a few minutes earlier, some hotel guests had been shot by a passing military truck full of Chinese soldiers. Martsen said hotel staff members had dragged the bodies back in the hotel and that he had barely escaped with his life. From a hotel balcony, Widener was able to take pictures with a long lens—but then he ran out of film. So he sent Martsen on a desperate hunt for more, and Martsen returned with one single roll of Fuji color negative. It was on this film that Widener captured one of the most iconic images in history, the lone protester facing down a row of Chinese tanks.

“After I made the image, I asked Kirk if he could smuggle my film out of the hotel on his bicycle to the AP office at the Diplomatic Compound. He agreed to do this for me as I had to stay in the hotel and wait for more supplies and could not risk being found out. I watched Kirk from my balcony, which was right over the area where the security was. In what seemed to be an eternity, Kirk unlocked his bike and started to pedal off, although a bit awkwardly because all my film was stashed in his underwear. Five hours later, a call to Mark Avery at the AP office in Beijing confirmed that the film had arrived and been transmitted world-wide. What I did not know until 20 years later was what actually transpired after Kirk pedaled the bicycle away.”

On the 20th anniversary of Tiananmen Square, Widener wasn’t sure if the young man’s name was Kirk or Kurt. Soon after, Widener says, that changed: “I was on the computer and that familiar ‘You’ve Got Mail’ rang out on AOL. I could not believe who it was from. After 20 years, Kirk had found me because of the article in the New York Times.”

Widener discovered that Martsen encountered gunfire and more soldiers after he left with the precious film and that he became lost trying to navigate back streets to find the Associated Press office. Martsen went to the U.S. embassy and handed over the film to a U.S. Marine at the entrance, and told the embassy to forward the film to the AP office.

“Kirk risked his life. If not for all of his efforts, my pictures may never have been seen.” The next day, the image appeared on the front pages of newspapers around the world. To see more of the award-winning American photographer, Jeff Widener’s work then please click here. 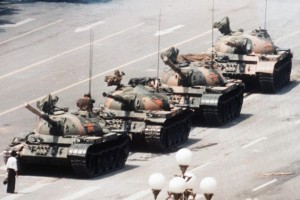