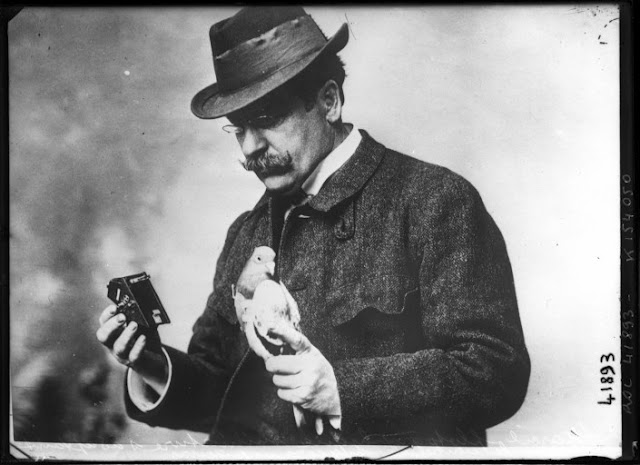 Have you ever wanted to take your very own ariel photographs but haven’t been sure how to go about it? Well, you might want to invest in training a pigeon. In the early 20th century, one hobbyist photographer equipped the common pigeon with a camera that captured the landscape below it. Julius Gustav Neubronner was a German apothecary, a marvellous inventor, company founder, and a pioneer of amateur photography and film. Neubronner was best known for inventing the pigeon camera for aerial photography and became one of the first film amateurs in Germany.The invention brought him international notability, which consequently lead the method to be used for military air surveillance in the First World War and others.

In 1908, Neubronner patented his invention, aerial photography by means of a ‘pigeon photographer’, which brought him international acclaim after he presented it to an interested audience at international expositions in Dresden, Frankfurt and Paris in 1909–1911. Spectators in Dresden could watch the arrival of the camera-equipped carrier pigeons, and the photos were immediately developed and turned into postcards which could be purchased. At the 1910 and 1911 Paris Air Shows he received two gold medals, for the method and for the photographs.