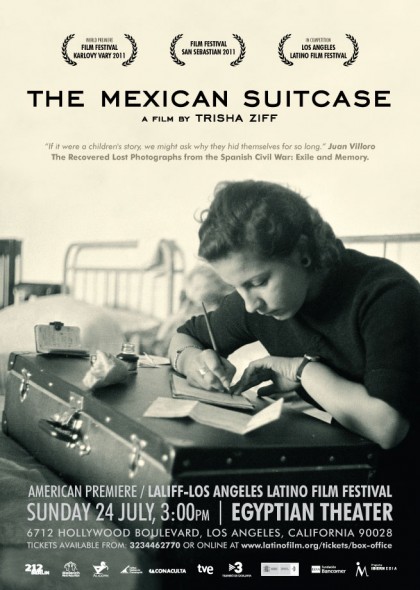 Trisha Ziff is a British filmmaker who recently finished a wonderful documentary about Capa’s Mexican Suitcase. Ziff was inspired to expose the truth about Spanish history, by following the incredible journey that these Civil War negatives had taken, by following their journey though Europe and America. Capa, Taro and Chim, who fought fascism through photography, were known Revolutionaries. She gave the ICP (International Centre of Photography) the opportunity to restore the negatives, and brought the Mexican Suitcases to New York in 2007.

The Mexican Suitcase film has been screened in various locations such as on July 24th it was shown at Laliff-Los Angeles Latino Film Festival, and in Europe it was screened on July 5th at the prestigious Rencontres, Europe’s most important photography festival, held in Arles, France, and it will also be shown at the San Sebastian festival in September. The next screening will be at the IFC Centre in New York on the 26th of August until the 1st of September, click here to buy tickets.

The Mexican Suitcase is a 90 minute feature documentary that tells in depth the extraordinary story of three lost boxes found in a closet in Mexico City 2007, which had been misplaced at the beginning of the World War II. Inside these boxes were 4,500 negatives taken by the three most accomplished photojournalists of their time, Robert Capa, Gerda Taro and David Seymour (Chim) during the Spanish Civil War. Below is the trailer of the unmissable film and a few photographs relating to it! If you would like to find out more about the documentary click here.