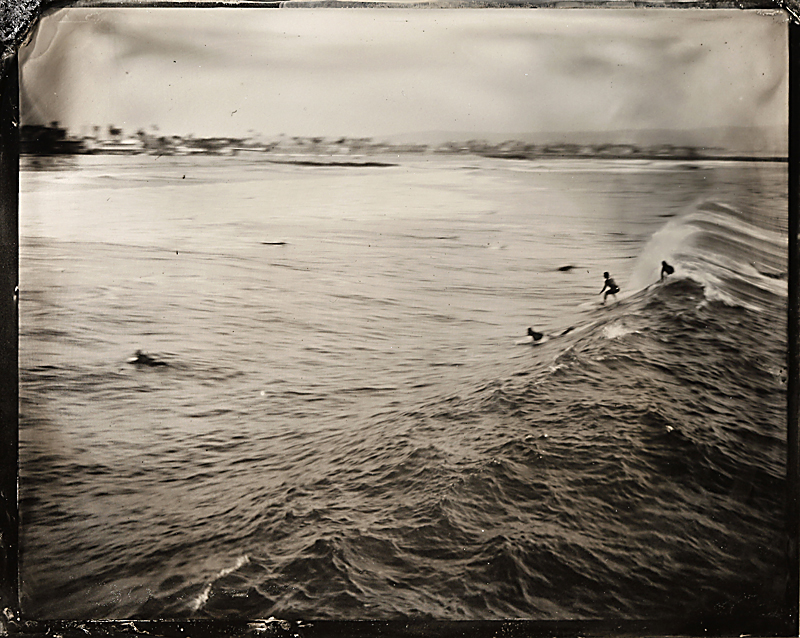 My name is Anton Orlov and I’m a photographic artist currently based in San Diego. Film and other analogue photography has been a passion of mine since I was a kid and for the past few years I have been completely engulfed in making tintypes and ambrotypes using wet plate collodion technique. The thrill of uncertainty, the challenges of timing, incredible resolution and permanency – all of these factors have made wet plate images entirely irresistible to me.

For those readers unfamiliar with methods of making tintypes I would like to briefly describe the process so that the following ventures of mine could be better visualized. Wet plate collodion is a technique invented in 1849 by Frederick Scott Archer and was most widely used from 1851 to mid 1880s when commercially made dry plates were introduced.

A plate of aluminum, in the case of modern tintypes, or glass, as in ambrotypes, is coated with collodion, which contain salts of bromide and iodine suspended in ether and alcohol. The entire image-making operation that follows must be done before that plate dries, hence the name ‘wet plate’.

A coated plate is dipped in silver nitrate for 1.5-3 minutes where it becomes sensitive to light. After that, in the darkroom or location dark box, it is placed in a holder, brought to the camera for exposure. Afterwards it is brought back into the dark and under red light it is developed by inspection and washed. The last steps are fixing and final wash. Resulting images are made up of particles of silver, so after the plate is dry it must be varnished to protect it from oxidation, but that can be done a while later.

Collodion generally has a maximum ISO of 1, maybe 2 if you’re lucky, and usually it’s a lot slower – more like ISO 0.25 or even 0.125. Therefore exposures generally range from few to a few dozen seconds. One thing to keep in mind as well is that collodion emulsion is blue-sensitive, so blue hues always turn out a lot brighter than they may seem in real life and yellows and reds if exposed normally are close to black in the final image. Another thing to consider is that ether and alcohol evaporate very rapidly, so depending on outside condition such as temperature and humidity you may have only a few minutes in which to make the image and process it, so a darkroom must be present within steps of the scene you wish to capture. On a damp cool day though the plate may stay wet for up to 20-30 minutes.

After a while of making tintypes I got a bit curious of how far I can push the medium and I wondered if it would be possible to freeze action under natural lighting conditions. I was aware of work having been produced in a controlled environment and with the use of very powerful strobes to freeze skateboarders in mid-flight, but to me that wasn’t ‘true action’ – after all, if you tell someone where and when to jump and then employ artificial lighting that is designed to freeze anything moving that does not really scream ‘action sports’ to me. Having lived in San Diego since the 90s and having at one point been very involved in surfing I decided to try to capture some surfers riding waves.

I was lucky enough to find a good deal on a 7in Kodak Aero Ektar lens that has maximum aperture of f2.5. Then I did some calculations. I figured out that if I keep my collodion at around ISO 1 by mixing it and refrigerating it then with a fast lens and in direct sunlight I should be able to get my shutter speeds down to about 1.60th or maybe even faster. Regularly that’s not really fast enough to truly freeze action, but I would worry about that later. I outfitted my lens with a roller-blind shutter made by Tommy of Japan somewhere around mid-20th century. The beauty of this system is that the shutter speeds allowed by those devices are within perfect range – 1/15th to 1/90th and they are adjustable continuously. So that’s the setup I brought out along with my dark box. 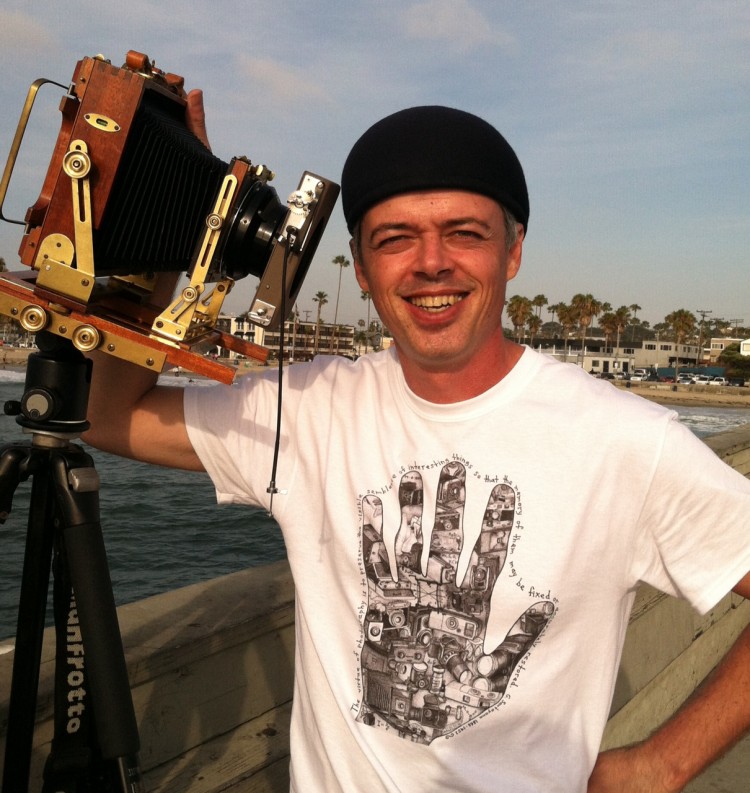 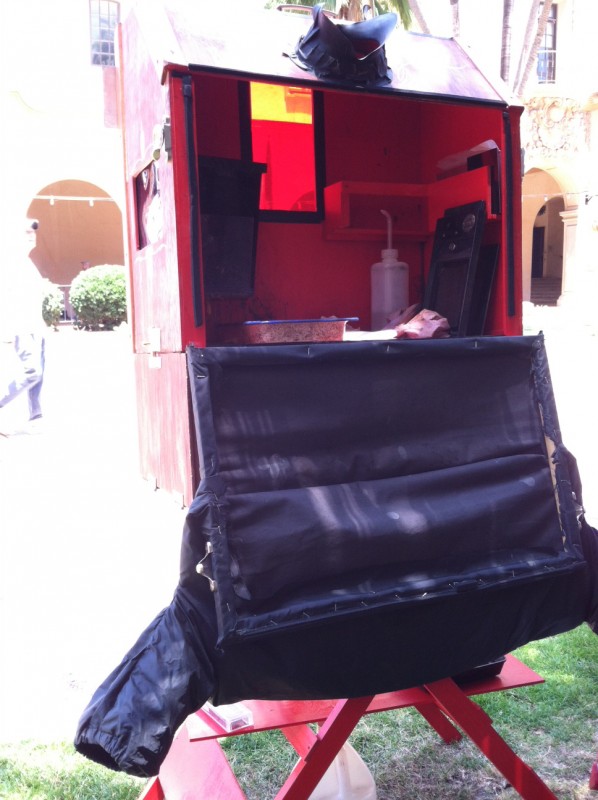 With that setup mounted on my Zone VI 4×5 and completed with the dark box for processing on location I headed out to the Ocean Beach pier because the break there allows surfers to take off very close to where I could set up my camera. I was in luck as the waves were big enough and the sun was bright and generous on UV spectrum. The fun part was the timing. Those who have surfed know that big waves come in sets and that most of the time in the water is spent waiting for that perfect big one to come. Sets come in about 4-5 or more minutes apart and the three to five large waves that comprise a set may break within a span of under a minute. So collodion gods must have been on my side when just after I sensitized my first plate and placed it in the camera a set started and I was able to make my first exposure of a guy riding a good 5-6ft wave in a perfect spot, so he wasn’t hidden by the white wash and also wasn’t too far away from the camera.

My exposure was 1/60th and the plate developed quickly, so for the subsequent two plates I upped the speed to 1/75th and finally all the way to 1/90th. The second plate wasn’t as successful – I waited a good 5 minutes and the only set that decided to come in was smaller than during the first plate and so all I got was the back of the head poking out of the break. I think the third plate was the best as far as composition and the degree to which action was frozen. I did have to wait about 3minutes for a big set to come and the plate started to dry out a bit, but I think the fact that a nice large wave broke in the perfect place for my framing and that three guys decided to jump on balances out the spottiness on the right side of the image.

Oh yeah, not to forget this – waves aren’t slow and surfers dropping in and riding them are moving even faster, so in order to actually be able to stop that motion to any acceptable degree, even with my shutter at 1/90th for the third plate, I had to pan the camera with the movement on the ball-head trying to move in a semi-diagonal line along with the figures. Don’t know if I need to remind the readers that a regular 4×5 view camera has no viewfinder, so I approximated my framing and hoped my horizon stays level (there are few more annoying things to me than an ocean horizon that is tilted, making it looks like the whoever took the photo had a Verdugo attack during exposure). So here are the fruits of that day’s labor – exposures 1 and 3. They are both 4x5in and made on aluminium. 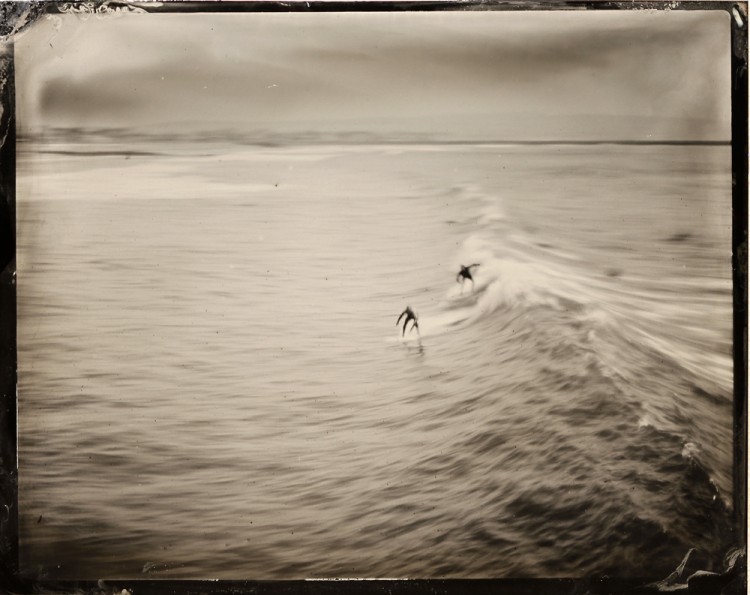 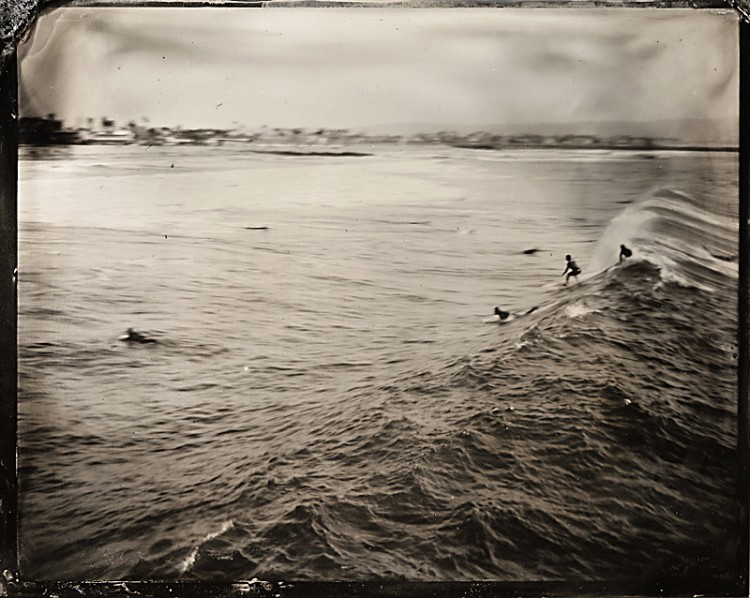 Another thing that I have not seen before was a wet plate image of fireworks and July 4th was coming up, giving me a perfect opportunity to try this out as well. I chose the same setup, but omitted the shutter this time and decided to just use my hat instead. San Diego has a splendid fireworks display over the bay by downtown and so my girlfriend and I made our way out to Broadway pier and because we arrived early enough we got an excellent spot only 10-15ft from the end. The barge from which the display was to be launched parked right in front of the pier about quarter mile out and so this was prime real estate.

I set up my box and camera and estimated the focus by thinking how high up fireworks usually explode and finding a building at about that distance to set my focus on. By the time it got dark and the show began I got plenty of curious looks and many questions of why in the world I would chose to do this in the day and age when a camera can send a picture to anywhere in the world within seconds is in everyone’s pocket… I’m pretty tired of explaining to people that I like making things with my hands and like the idea of my images existing in this reality long after I’m gone instead of disappearing into the ocean of digital chaos and becoming obsolete in 20 years, so I mostly played dumb.

Then the show started. Usually the display lasts about 25 minutes, so I figured I had time to make three plates. I dipped the first one into silver a minute before the start and by the time I had it in camera there was plenty of action. I kept the lens open for about 20 seconds and just wanted to see what would show up. After processing and clearing in the fixer I was pleasantly surprised as there were a few fiery blooms were clearly visible, but there weren’t really enough of them. On the next plate I got lucky – during the 40 or so second exposure plenty of large fireworks went off within my frame and there were even some that I have not seen before, the kind that start out in a radial pattern, but then each charge changes direction in a random manner.

You can see some of those in the plate below. You can also see the trace-bullet-like pattern of the charges that twinkled as they flew through the night sky in celebration of victory over the oppressive taxation regime of the British and the beginning of a brand new tax era. By the time I had my third plate sensitizing in silver the grand finale decided to come early and after an exuberantly powerful wave of bangs and booms it was all over. I had to toss my plate in the trash as there is nothing at all picturesque about the San Diego skyline in the dark – it’s not Las Vegas… Here is that second plate – it’s of a traditional ‘quarter plate’ size, which is 3.25 x 4.25in. 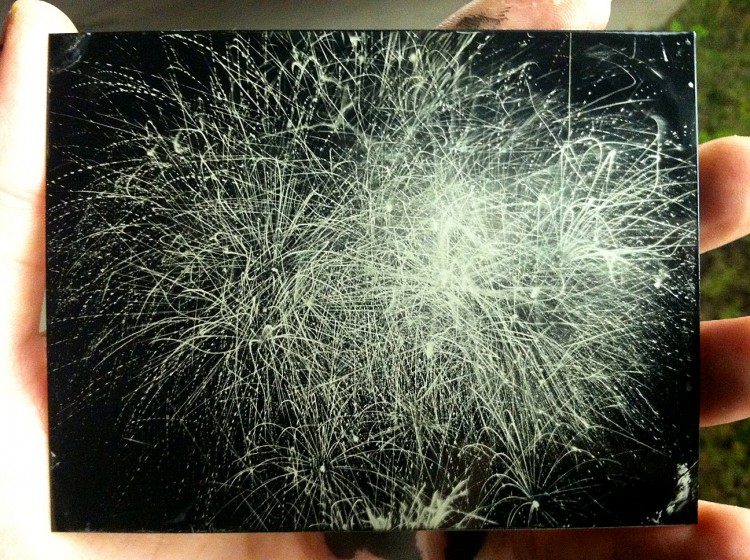 By the way – if you want a real thrill do try this at home. There’s nothing quite like having to concentrate on doing a good even collodion pour and then having your head in the dark trying to keep the plate with developer on it level and agitated while loud explosions are rocking your dark box and shaking the hair on your head! Now I partly know how war-time photographers felt inside their darkroom wagons back in the second part of 19th century.

Also, upon further inquiry I was made aware that someone else had indeed done this about 10 years ago, but their plates have been destroyed in a fire, which is always a tragedy. Another point that was brought up by someone was that there really wasn’t any reason for this not to work – after all, fireworks have a lot of magnesium in them and that stuff burns bright and puts out plenty of UV, which is why they used it in flash guns before saver flash cubes and electronic flash units made the life a bit more boring.