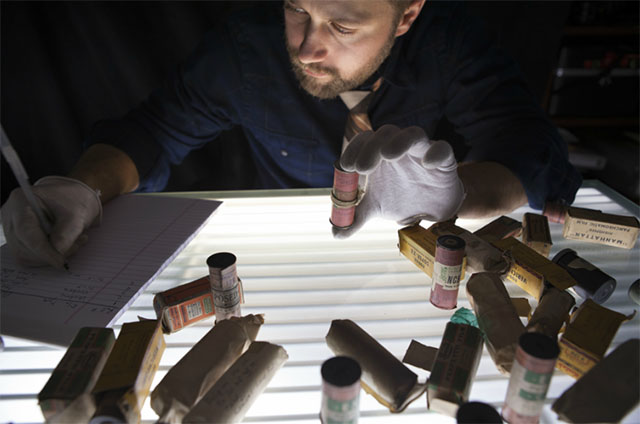 Our hats go off to The Rescued Film Project for the dedication and curiosity for developing every single roll of film found and sent to them from any corner of the world. The Rescued Film Project states: “The project shares an online archive gallery of images that were captured on film between the 1930’s and late 1990’s. Each image in our archive was rescued from found film from locations all over the world, and came to us in the form of undeveloped rolls of film. We have the capability to process film from all era’s. Even film that has been degraded by heat, moisture, and age. Or is no longer manufactured.”

Recently photographer Levi Bettweiser, the man behind The Rescued Film Project, discovered one of his biggest finds yet, 31 rolls of exposed, undeveloped film believed to be shot by a single WWII soldier.

Bettweiser told PetaPixel that he found the film rolls in late 2014 at an auction in Ohio. About half the rolls were labeled with various location names (i.e. Boston Harbor, Lucky Strike Beach, LaHavre Harbor). “I know nothing about who shot the film or who it belonged to.” He goes on to say, “I gets nervous when developing the first roll in any batch of film, since the results with that one often indicate how fruitful the rest of the batch will be.”

The video (below) shows Levi Bettwieser taking the careful steps in how he develops these films and gives us a glimpse of the finicky process of developing old films. As some of you might know processing old films can result in all sorts of challenges for example having the film rolled up for decades can make it extremely fragile and tough to flatten out.

To see more of these fascinating photographs from WWII please click here to visit The Rescued Film Project.