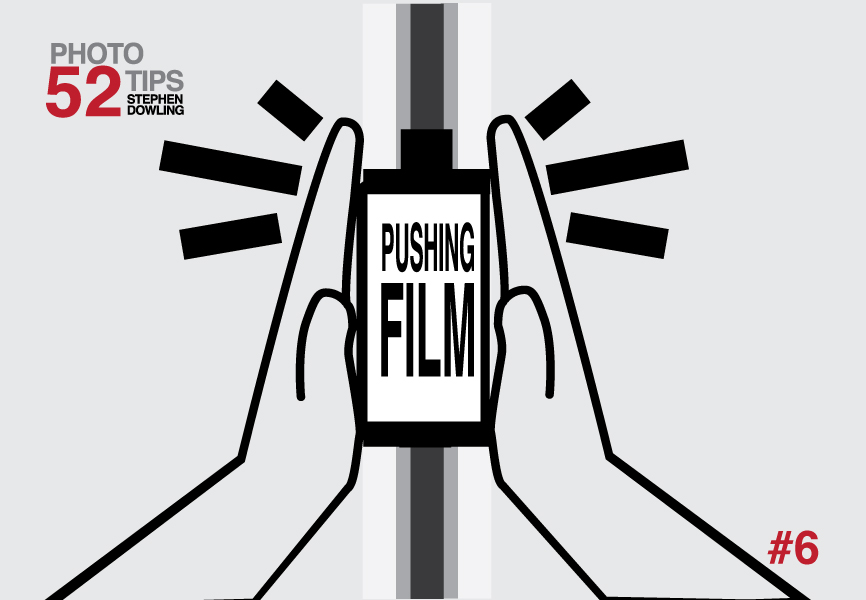 Push processing is one of the film photographer’s secret weapons. It’s a useful trick when you suddenly find you need to use higher shutter speeds to capture action, or find yourself in lower light than expected. It allows you to use faster shutter speeds – meaning pictures won’t be blurred or underexposed – and increases grain, which can add bags of atmosphere. Pushing film/ uprating also produces more contrast and increases the effective sensitivity of your film too, allowing you to shoot well into night fall!

Pushing film involves when one goes to develop their film you simply give it more time in the developer as the technique is overdeveloping the film compensating for the underexposure in the camera.

As long as your camera allows you to manually change your film speed rating, push-processing is easy to do. It means changing the ISO rating on your camera so that the camera thinks it’s shooting a faster-speed film. So if you have a roll of 100-speed film, you set the camera’s meter to 200, or 400. Or if you have 400-speed film, uprating the meter to 800 or 1600 is also a tried-and-tested trick.

It’s one of the easiest film experiments to try out, though for best results there’s a few things to remember.

Label them – immediately: Pushing film will only work if the lab knows that that’s your intent. Changing the meter means you’ll be using faster shutter speeds, which means the film is exposed for less time. This means the film will need longer development times. If you don’t label the film that it needs to be uprated, you’ll get negs that are horribly underexposed. The more the film has been pushed, the worse this will be. So label them, as soon as you’ve shot the roll – a pack of stickers are always in my camera bag for just this reason.

Mark the film speed as soon as you’ve taken the film out of the camera. That way you don’t have the frustrating problem of trying to work which of the rolls you’ve shot on a weekend or a trip away that needed to be uprated…

Most labs will do this, perhaps with a small extra charge. If your lab doesn’t – find one that does. They deserve your custom.

Meter for highlights: When you push film, you increase the grain, those speckles that add atmosphere to film pictures (and look so much better than digital noise) . If you concentrate too much on the shadows, you turn what should be pitch, rich blacks into something greyer; the lack of contrast can make shadows look milky and indistinct. Metering for the brighter parts of the scene will make sure that the shadows remain nice and dark.

Push fresh film: New film is the best to push. I’m a big fan of using expired film, but unless the film has been fridge- or freezer-stored you might find the results lack contrast and depth. Shoot expired film box speed until you’re confident it’s giving consistent results. When pushing  colour film it can result in more saturation and distorted colours as well as more grain.

One thing you really can’t do is change your ISO halfway through your film. In some cases people have done this and I’ve seen the results of a darkroom printer actually process half the roll for the selected time and the other side the extra required time. Surprisingly it works, if it’s in the right hands, yet I wouldn’t recommend this.

Limit the amount it travels: Airport x-rays fritz film, and they fritz faster film a lot quicker than slow ISO film. If you push process film away from home, bear in mind you’re also making it more susceptible to fogging from x-ray radiation. One or two passes probably won’t hurt (as long as it’s fresh film) but if you’re taking film through more, you might want to wait until the end of the trip before you start uprating – either buy fresh film on location to push, or leaving it at the normal speed until the last minute.

Some films push better: Black and white film is by far the best to push. King of them all is Kodak’s Tri-X, which has changed little since it came out in the 1950s. I’ve had fantastic results with this 400-speed film rated at anything up to 6400; the characteristic ‘chalk-and-charcoal’ bright whites and deep blacks are retained.

A great example of a push processing situation that you must check out is John Alcott won an Oscar “ for his gorgeous use of natural lighting” in Stanley Kubrick’s 18th century period film Barry Lyndon, in which he succeeded in filming scenes lit only by candlelight through the use of “special lenses designed by NASA for low-light shooting on moon landings” and push processing the film stock.

My Soundcheck Sessions project (shown above) has been shot mostly on the now sadly defunct Fuji Neopan, a 400-speed film pushed to 6400. It’s another film that keeps it characteristics with careful developing. Though the film is no longer available, you must still be able to find the last few rolls in a local camera store or on eBay.

Other films might suit your style. The only way to find out is to experiment!