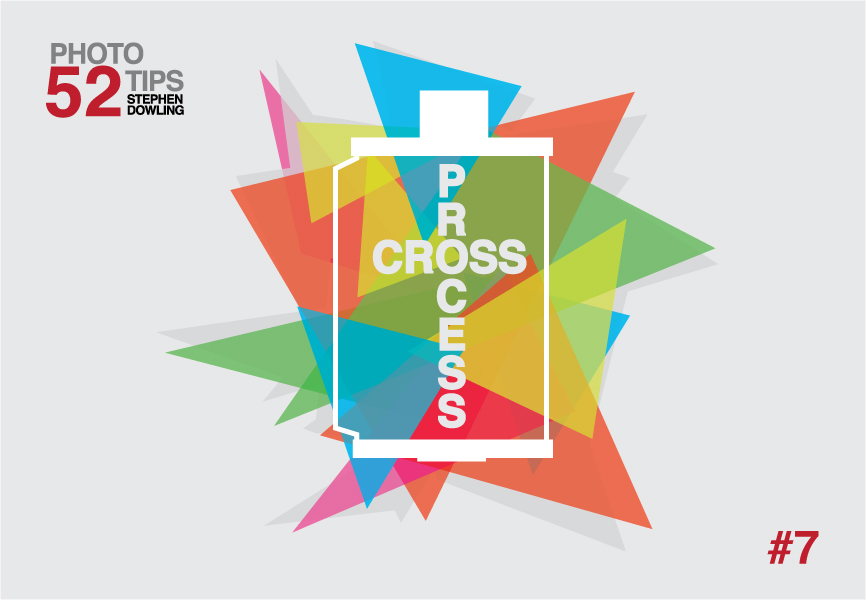 Cross-processing is one of the easiest film experiments you can try. What it involves is taking a film and getting it developed in the chemicals used for another photographic process.

In the days long before Instagram, it was cross-processing that made such a star of the humble Lomo LC-A, and spawned the analogue movement Lomography. The Lomo’s saturated lens and tendency to vignette made it perfectly suited to the lurid colours and atmospheric, heightened grain.

Cross-processing – using more sophisticated cameras – was a hallmark of edgier fashion and music photography aswell, lending un-natural colour tones. Like the filters found on apps such as Instagram, it’s not a technique that works 100% of the time – shooting colour slide xpro in dull weather can be more miss-than-hit – but at its best it can breathe new life into your photography.

The only problem is – slide film is very much on the wane. Fuji is the only major film manufacturer still bothering to make new slide film, and that slide film is expensive – in the UK a roll of it is likely to cost you at least £10. And Fuji’s Provia and Velvia films, the last they are making, look much better shot normally than they do cross-processed; Provia picks up a nasty lurid green tone and Velvia tends to show up a strong magenta/purple cast.

They’re a long way from the results you can get with the two films that really came alive with cross-processing. One of these was the original Agfa CT100 Precisa, a consumer-grade slide film made by the German film manufacturer until around 2006 but was then later repackaged as Fuji Provia which is what you see on the market today, averaging at about £6/7 a roll, great if you want to shoot slide on a budget. When cross-processed Precisa looks amazing – blues become super-saturated, reds shine, grain is boosted and shadows become deep and rich. The next best is Kodak Elite Chrome 100, another film where colour and grain are boosted. Elite Chrome was discontinued in 2011. Apart from one brand of Lomography slide film – rebadged Agfa RSX200 – things have looked grim for those wanting to evoke that early 90s Lomo look.

Until last year. Italian film manufacturer Ferrania announced it is returning to making film, and the first film it will return with is a 100 ISO slide film – the film that used to be called Scotch Chrome. It’s another film that cross-processed well, boosting blues and grain. It will be a few months before the films are available in the shops, but it gives cross-processing a much-needed boost in the arm.

If you’re wanting to try cross-processing, here’s a few tips and tricks…

Make sure the lab knows they’re xpro: Without instructions, a lab will process films normally. So label them clearly, either xpro or C-41. Most labs will do this, though they may charge you a little extra.

Get it scanned: Scanning your own film brings down the cost, and gives you ultimate control. I scan all my films – except xpro. The minilab scanners do such a great job of capturing those warped colours that there’s no point. You can spend a lot of time with a scanner and Photoshop trying to get it looking right, and chances are the lab is always going to do a better job.

Ebay is your friend: Kodak Elite Chrome may not be made any more, but it still crops up on everyone’s favourite internet auction site. Even the old-school Precisa – though you have to do a little bit of detective work to make sure you’re buying the right kind. Fuji has rebadged some of its Provia film as “Agfaphoto CT100 Precisa” which goes a grim kind of green when cross-processed. Look for a “Useby:” date of before 2008, but more importantly a box that has “Agfa” on it and the old-school Agfa diamond logo (even more cofusingly, there were batches of the old school film that was packaged in the new boxes – check this excellent post on Flickr to find out if you’ve found some of them). It still crops up. Kodak Elite Chrome, and the pro-level Ektachrome is more common. Snap them up.

Xpro loves light: Just like when you’re using expired film, xpro wants light – sunlight or artificial light it doesn’t matter (and yes, the flash on your camera counts). To make the most of the warped colours, those colours need to be saturated. Dull, overcast days? Don’t shoot xpro. Save it for a day when you can make those colours pop.