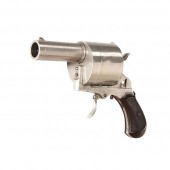 Have you ever wondered if a camera can be disguised in any shape or form? Well these cameras will give you an idea of how extreme these results can be.

(Not in a particular order)

1. Enjalbert Photo Revolver de Poche – was designed by Albert Posso (1854-1932) for the French company Enjalbert in the late 19th-century. It is said that only 14 of these were made, with now fewer than six surviving examples on record, most of which are being displayed in museums in USA, Europe and Asia. On Posso’s return to France in 1877, after serving in the German military as a senior gunsmith, he became employed by the French photographic firm, Enjalbert, they expressed to him that they wanted him to design a camera which looked like a gun. The camera’s appearance owes everything to his skill and expertise which led to the production of one of the most effective and iconic disguised cameras. Also, believe it or not, it was the first handheld cameras in photographic history! The cylinder contains a magazine mechanism for 10 plates each 16x16mm. This camera sold at the WestLicht Auction house for a shocking €57,000.

2. Kiev JPS cigarette camera – is a 16mm, camera disguised as a John Player Special cigarette packet. The picture below shows the original version with enamelled metal body, the camera was based on Kiev 303 and was supposedly designed by KGB (the former Soviet Secret Police). The longer cigarette is actually the camera’s wind handle, with a well concealed button release which is on the top, the aperture and shutter speed settings are at the bottom of the pack and there is also still room for two real cigarettes to complete the disguise, this was sold for €500.

3. (KGB) Microdot Camera – is an incredibly well crafted camera that is capable of taking 15 exposures, while disguised as a button! These exposures are on a round 24mm diameter filmplate producing round images with 3mm diameter, the small camera is demountable and very easy to transport. The camera can be carried invisibly mounted on to your coat. This is an unknown oufit used by Russian or Polish secret service. This unnoticeable camera sold for a staggering €1,560.

4. Ring Camera – miniature ‘spy’ camera concealed in a brass ring. Yet unfortunately the WestLicht Photograpica Auction house is unknown of its origin of this little masterpiece, considering that it sold for an amazing price of €2,160.

5. Coronet Midget Blue with Umbrella – WestLicht have said that this is the most rare Midget in very fine condition, which amazingly enough is mounted on to the grip of an umbrella, which is a very rare original outfit. The Midget is a miniature box camera, it sold in large numbers and was produced in various colours: black, brown, dark green, light green, light red, dark red and blue. The blue finish was introduced after the others and it is very rare to find. This Midget sold for €2,880.

6. Suzuki Optical Co. Camera-Lite – below is the first version of the fully functioning ‘Zippo’ lighter camera, producing 20 exposures, 6x6mm, made by Suzuki Optical Company in Japan, 1955. An unusual combination of sub miniature cine camera and cigarette lighter, the Camera Lite only took specially manufactured 8mm wide film in small magazines. In 1953 the Suzuki Optical Company’s Echo 8 sub miniature lighter/camera was featured in ‘Roman Holiday’ (Paramount Pictures). In turn it increased the demand of the film which Suzuki couldn’t keep up with. As a result they brought out the Camera Lite as a cheaper, simpler version of the Echo 8. The lighter below sold for €528.

7. Harukawa Septon Penletto – which is a very rare and alternative name for the Septon pen camera for 16mm film. It has been said that only less than 5 of these cameras are known to exist.  It appeared in 1953 and has a working mechanical pencil built in. Marketed by the Japanese firm Harukawa Trading Company, the Septon Penletto has a fixed focus lens, a single speed shutter and bulb position. The shutter release is a button on the left side of the camera. At the WestLicht Auction it sold for €1,800

8. KGB Micro Panoramic Spy Camera – despite its minimal size, it contains a true panoramic camera mechanism with a rotating Gaussian 6-element symmetrical lens in a drum of 12mm in diameter. It uses standard Minox cassettes (that have to be broken in two halves with the mid-part removed before use) for 36 negatives 8x11mm, angle of view 65 degrees horizontally or 80 degrees diagonally. Film transport and cocking of the drum by sliding a chromed tab. Most design details suggest that this camera comes from the same micro precision workshop as the Micro Spy Camera, even the lenses are identical. The exact purpose of the camera is unknown, probably it was intended for taking wide views of small arrangements (the camera is factory-set at 40cm distance). For sure the smallest truly panoramic camera with a rotating drum. Only three of these cameras are known to exist, it is truly a unique piece created by the Soviet secret service technology, which was produced in the early 70s. This sold for a astonishing €36,000

9. Expo Kamera NY Watch Camera – disguised as a railroad pocket watch, special film-cartridge, cap and chain, black maker’s box the Expo Watch camera was a popular novelty, or disguised camera, of the early 1900s.  The camera measures 2 1/8 x 7/8 inches. The Expo camera was available for over 3 decades and it was introduced in the United States in 1905 and offered for sale as late as 1939. This camera watch went for €276.