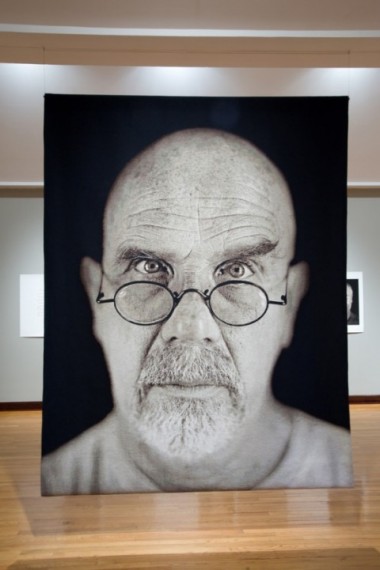 “I threw away my tools, I chose to do things I had no facility with. The choice not to do something is in a funny way more positive than the choice to do something. If you impose a limit to not do something you’ve done before, it will push you to where you’ve never gone before.”

Charles Thomas “Chuck” Close, is a unique and astounding American painter and photographer who came to fame as a photorealist, through creating these massive and beautiful scaled portraits. Though a catastrophic spinal artery collapse in 1988 which left him severely paralysed, yet despite these difficult circumstances he has continued to paint and produce work that remains sought after by museums and collectors.

Close has explored difficult photographic processes such as daguerrotype in collaboration with Jerry Spagnoli and sophisticated modular/cell-based forms such as tapestry. Close’s photogravure portrait of artist Robert Rauschenberg, “Robert” (1998),which appeared in a 2009 exhibition at the Heckscher Museum of Art in Huntington, New York, featuring prints from Universal Limited Art Editions.

On the 7th December, 1988, Close felt a strange pain in his chest. At the time he was at a ceremony honoring local artists in New York City and was waiting to be called to the podium to present an award. Close delivered his speech and then made his way across the street to Beth Israel Medical Center where he suffered a seizure, which unfortantely left him paralysed from the neck down. The cause was diagnosed as a spinal artery collapse. Close called that day “The Event”. For months, Close was in rehab strengthening his muscles with physical therapy; he soon had slight movement in his arms and could walk, yet only a few steps and has relied on a wheelchair since.

Yet considering the circumstances, Close continued to paint with a brush strapped onto his wrist with tape, creating large portraits in low-resolution grid squares created by an assistant. Although the paralysis restricted his ability to paint as meticulously as before, Close had, in a sense, placed artificial restrictions upon his hyperrealist approach well before the injury. He adopted materials and techniques that did not lend themselves well to achieving a photorealistic effect. Small bits of irregular paper or inked fingerprints were used as media to achieve mind blowing realistic and interesting results. In a book entitled Chronicles of Courage: Very Special Artists where he spoke in detail about the impact the disability had on his life and work; written by Jean Kennedy Smith and George Plimpton.

‘A Couple of Ways of Doing Something’ exhibition features fifteen of Chuck Close’s precisely intimate daguerreotypes (including striking enlargements) of leading contemporary artists, paired with Bob Holman’s witty and beautifully typeset poems. As individual portraits, each daguerreotype offers an intimate and immensely revealing study of the subject, extending the hyperrealist tradition of portraiture for which Close is renowned. In keeping with the exhibition title, Chuck Close, as curator, has included examples of his other works taken from each daguerreotype in a variety of media, including tapestries and photogravures. The collected work displays a stunning and eye catching work of Close’s influential and highly creative circle of friends and colleagues—from Andres Serrano to Cindy Sherman.

Here below are some examples of what the travelling exhibition will look like, showing Close’s unmatchable and astounding photographs, as well as a clip of Chuck Close in the Artists & Alchemists Documentary.

I’m afraid of https://tramadolhealth.com side effects since she is at an old age.