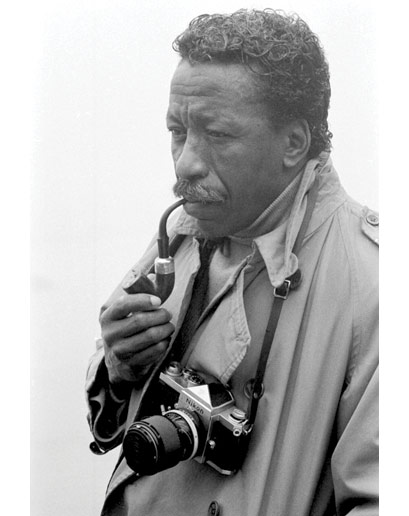 “I’ve known both misery and happiness. I’ve lived in so many different skins. It is not possible for one skin to claim me.”


This 90 minute documentary which takes a deep and insightful look into the work and life of the very talented and acclaimed photographer, filmmaker, writer and composer, Gordon Parks. Among his many accomplishments, he was a groundbreaking LIFE photographer who’s images have had a deep impact on culture. Gordon Parks became the first African-American to work as a staff photographer for LIFE and the first black artist to produce and direct a major Hollywood film, “The Learning Tree,” in 1969.

The HBO documentary ‘Half Past Autumn – The Life and Work of Gordon Parks’ concentrates much more on his works than his life. It’s well worth the watch, allowing you to view his rich portfolio of his photography, but fundamentally tells the individual story behind them.

Parks started his life in Kansas, as the youngest of 15 children! When he was 15, his mother died and Parks was sent to St Paul, Minnesota to live with a married sister and her husband. Parks and his brother-in-law were soon at odds and he was living on the street, working as a railroad waiter. It was while working there that he saw a magazine someone had thrown away – it featured Dorothea Lange photographs of the rural poor, from that moment he was transfixed by the power of the camera. In 1938, after being inspired by a documentary war film, Parks purchased a used Voigtlander Brilliant, TLR in a pawnshop for $7.50. After developing Gordon’s first roll of film, an amazed Kodak sales clerk offered to give him a show around his shop. Since then he has not stopped taking photographs.

Parks worked for LIFE for more than 20 years (1948-1972), and by the time he was 50 he ranked among the most influential image makers of the postwar years. In the 1960’s he began to write memoirs, novels, poems and screenplays, which led him to directing films. In addition to his Hollywood hit “The Learning Tree,” he directed the popular action films “Shaft” and “Shaft’s Big Score!” In 1970 he helped found Essence magazine and was its editorial director from 1970 to 1973. In finding early acclaim as a photographer despite having no professional training, he became convinced that he could accomplish whatever he set his mind to and to his own astonishment, he proved himself right.

Not only was he a candid and dedicated photojournalist depicting simple yet powerful images, he was also a fashion/portrait photographer. When the clerk in the Kodak shop prompted him to get a fashion assignment at Frank Murphy’s women’s clothing store in St. Paul. Parks took the offer and ending up double exposing every frame except one, but that shot caught the eye of Marva Louis, heavyweight boxing champion Joe Louis’ elegant wife. She encouraged Parks to move to Chicago, where he began a portrait business for society women. Since then he has be able to work for Glamour and Vogue.

The documentary serves as a brief social history of America as well as a showcase for Parks’ work and extraordinary life. The real centrepiece of the documentary here is Parks’ photography, hundreds of his remarkable pictures are shown over the course of the film. Below is the documentary and some of his sensational images, including his most iconic image ‘American Gothic’.