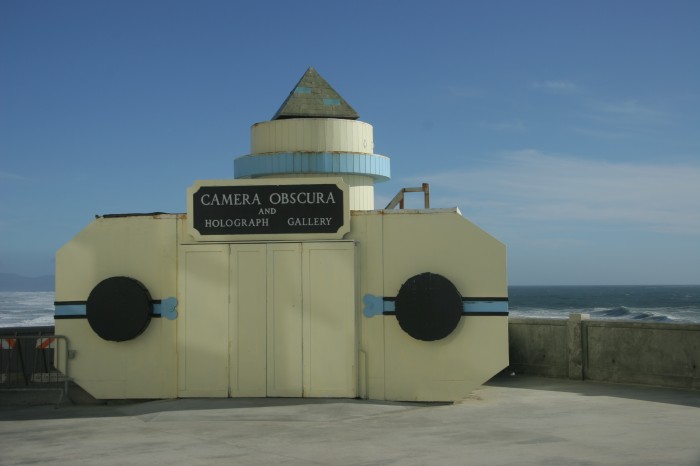 Based in sunny San Francisco on the edge of a cliff overlooking the sea, is an historic Camera Obscura; a room sized “camera” built in 1946, which was based on a 15th century design by Leonardo da Vinci. It was designed to look like someone had left a giant 35mm camera there with its lens pointed to the sky. The 10-inch mirror on top of the camera rotates 360 degrees, beaming a view of the area magnified by seven times onto a six foot parabolic table inside.

Camera Obscuras actually have a long history in San Francisco. The first recorded reference to one is from the 1860s in an attraction called Woodward’s Gardens. The second Cliff House, built in 1896, had a Camera Obscura on its fourth floor that
was destroyed when the building burned down
in 1907. On the 23rd of May, 2001, the 1946 Camera Obscura at Cliff House was added to the National Register of Historic Places and saved from becoming demolished.

It was built as part of the Playland at the Beach amusement area. The designer of this simple attraction was Floyd Jennings who also constructed two other Camera Obscuras, now lost, at The Garden of the Gods and Lookout Mountain.

If you would like to visit the Obscura, reviewers have suggested going to the camera 1.5 hours before sunset on a clear day for the best experience. It’s open from 11am to 5pm on “beautiful days”, and costs $3 for general admission.

Information: The Magic Mirror of Life