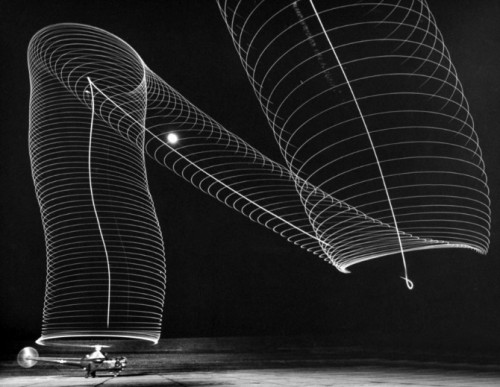 Andreas Bernhard Lyonel Feininger was a remarkable German American Photographer, and writer on photographic technique, noted for his dynamic black-and-white scenes of Manhattan and studies of the structure of natural objects. He combined an architect’s love of precision, space, and technique with an artist’s love of sweeping vistas.

Born in 1906 Paris, France to an American family of German origin. His father was the well known Bauhaus artist painter called Lyonel Feininger, where Andreas Feininger grew up on painting and design, which influenced him though out his life. Feininger was originally educated as an architect in Germany and graduated with highest honours in architecture, yet at this time, Feininger was using a camera as a reference aid in creating his building designs. The camera became his mechanical sketchbook. Commissions were scarce for non-European citizens in the depressed economy.

After a year’s work in France for the legendary architect Le Corbusier, followed by a struggle to find employment in Stockholm, Feininger turned his attention full-time to photography. With the rise of Hitler he fled to Sweden and then immigrated to America in 1939, where in 1943 he became a staff photographer for Life magazine where he completed more than 430 assignments in a twenty year span up until 1962.

Feininger’s works are masterful in their technical excellence, such as his timeless images of New York Landscape seen from eight miles away in New Jersey, 1947 are notable for their harmony, balance, and grand scale. Feininger’s images revealed a new aesthetic of order and geometric perfection, even a seemingly ordinary object like a shell possesses mesmerizing, symbolic qualities when seen through Feininger’s lens.

Feininger had said that the city had attracted him since his earliest days as a photographer. But in time this love grew to include all the aspects of the city and its buildings, its people, its cars and traffic jams, its confusion and even its ugliness. ‘I see the city as a living organism: dynamic, sometimes violent, and even brutal,’ he stated. As well as being a compelling photographer he was also a prolific and admired writer; Feininger has published several textbooks and picture books on photography that are now translated into several languages. Feininger’s photographs are in many important collections including:

Below is an interview that Feininger had with ASMP (American Society of Media Photography) which took place on the 5th of April, 1990. Below that is a video interview with the BCC series Master Photographers.

ASMP: You became a photographer in Germany or Sweden?

ASMP: Why can’t you photograph people?

ASMP: In the past 40 years or so, a lot of serious thinking has been done on perception.

Feininger: Yes. That’s so important for making good photographs. Photographers — idiots, of which there are so many — say, “Oh, if only I had a Nikon or a Leica, I could make great photographs.” That’s the dumbest thing I ever heard in my life. It’s nothing but a matter of seeing, and thinking, and interest. That’s what makes a good photograph. And then rejecting anything that would be bad for the picture. As I say, the wrong light, the wrong background, time and so on. Just don’t do it, not matter how beautiful the subject is. I photograph many pictures and just use a little bit of text, to make you see. That’s the only way you can do it.