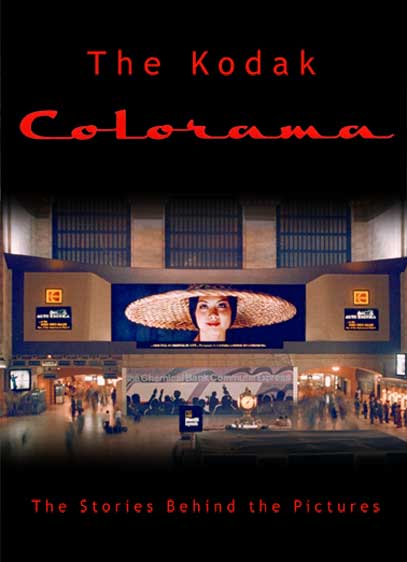 The Kodak Colorama – The stories behind the Pictures

The Kodak Colorama was described, at the time, as the worlds largest photograph. Displayed on the east balcony of New York’s Grand Central Terminal for 40 years. The 18×16 foot Colorama that hung there became just as famous as the Terminal itself.

In 1950 Kodaks executives were challenged with presenting a commercial, which would be displayed in Grand Central Terminal. They recalled Kodak’s success with projecting colour slides to an astonishing size for the 1939 World’s Fair, which gave them the idea to use it in this situation. Unforntantley it became apparent that the giant terminal’s lighting would wash away the slides impact. The alternative was proposed to use massive rear lighted colour transparencies. For the scale their imagined it to be on, a custom built enlarger had to be made, which projected camera sized original colour negatives to Colorama size. Each print film panel was processed in individual steps. Approximately 450 feet of print film was needed for the test strips and panels required for each 60×18 foot transparency.

These photos were enlarged onto successive strips of Ektacolor print film, each 19 inches wide and about 20 feet long. 41 strips were processed and were spliced together with transparent tape to make one giant 60×18 foot display transparency. As technology improved, print film 40 inches wide was used and only 20 panels were needed.

What were the Colorama’s? The Colorama’s were photographic billboards that simply advertised photography, the message being a photographic vision. The Colorama’s triggered off peoples interest into photography, they wanted to know how these huge photographs were made, which in turn made the public want to take better photographs of their own. The first Colorama’s were captured on a 10×8 view camera, primarily used for its large film size, the downside to these cameras were that they did not operate or set up quickly. Then the 20×8 Deardorff Banquet camera was the next used, this camera was capable of producing 4 7/8 x 16 inch size colour images for a 44x enlargement to the full 60×18 foot Colorama. The Deardoff Banquet was a lot easier to use and was the camera of choice for 15 years.

Here is a short clip from the documentary:  The Kodak Colorama – The stories behind the pictures.