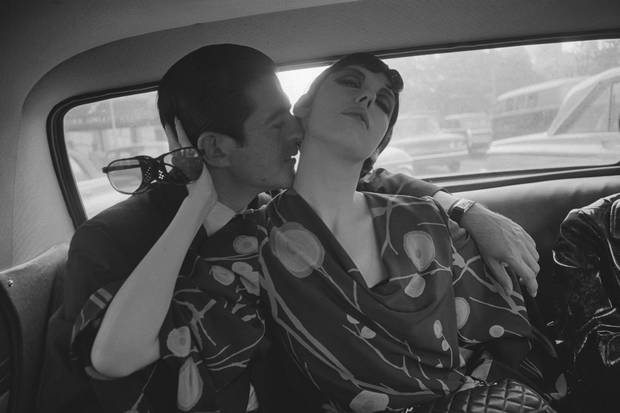 “I never made a cent from these photographs. They cost me money but they kept me alive…They were the only creative outlet I had for these years until I made Easy Rider. I never carried a camera again,” reads a Hopper quote typed out on the wall.

From Hell’s Angels and hippies to the streets of Harlem, Hopper’s photography powerfully captures American culture and life in the 1960s, a decade of progress, violence and enormous upheaval.

At the age of just 18 Hopper was already a hot young star who signed with Warner Bros. yet he lost his contract with the studio after a row with the director Henry Hathaway on the set of From Texas to Hell in 1958. He didn’t return to his first love, filmmaking, until 1967 when he started work on the 1969 release of Easy Rider, a movie that helped herald in a new era in filmmaking dubbed “The New Hollywood,” where filmmakers like Hopper did things their own way.

Dennis Hopper carved out a place in Hollywood history, with roles in classic films like Apocalypse Now, Blue Velvet, True Romance. He’s less known, though no less respected, for his work as a photographer. Hopper discovered his passion for photography through James Dean, who he worked with on Rebel Without a Cause.. This exhibition brings together over 400 images, taken during one of the most creative periods of his life in the 1960s. Every image you’ll see was chosen by Hopper himself for his first major exhibition in 1970 and is the vintage print he produced for that occasion.

This was a decade of huge social and political change, and Hopper was at the eye of the storm. With his camera trained on the world around him he captured Hell’s Angels and hippies, the street life of Harlem, the Civil Rights movement and the urban landscapes of East and West coast America. He also shot some of the biggest stars of the time from the worlds of art, fashion and music, from Andy Warhol to Paul Newman.

Together, these images are a fascinating personal diary of one of the great countercultural figures of the period and a vivid portrait of 1960s America.

Exhibition at the Royal Academy of Arts curated by Petra Giloy-Hirtz. Organised in co-operation with The Dennis Hopper Art Trust. For further information on the exhibition please click here.