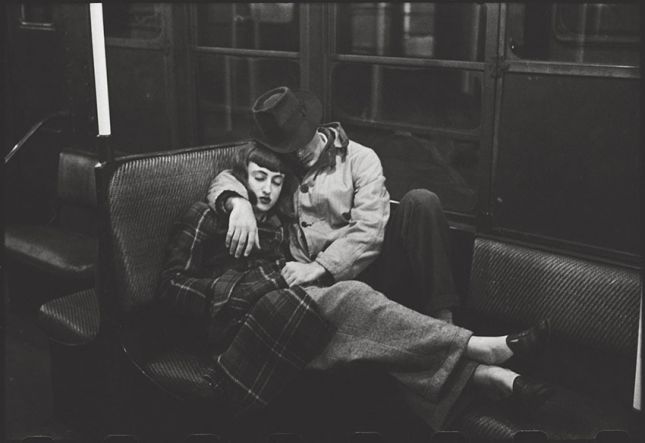 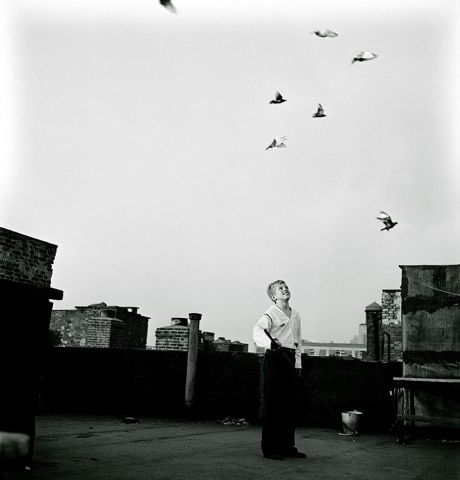 Stanley Kubrick (1928–1999) is one of the best known and most important directors of the twentieth century. His ability to tell perfect stories in film is legendary and caused him to write film history. Asked about his work method, Kubrick gave the simple answer “Well, I never shoot anything I don’t want”. Timelessness and independence mark his work and explain to this day the enduring success of his films, which include 2001: A Space Odyssey, A Clockwork Orange and Eyes Wide Shut. The exhibition Eyes Wide Open. Stanley Kubrick as Photographer opens up a less known chapter of his career: between 1945 and 1950 a series essay-type photographic reports was featured in the American magazine Look, which allowed Kubrick to tackle such parameters as composition, atmosphere and timing and thus develop his very own narrative technique and imagery.

At the age of only sixteen, Kubrick took a photo in April 1945 which shows an elderly newspaper vendor at his kiosk. He is leaning his face on his hands and looking at the newspapers on sale which show banner headlines blaring “Roosevelt Dead!” and “F.D.R. DEAD!” With this photo – incidentally everything other than a snapshot apparently, but the result of intensive “directing” of the newspaper vendor – Kubrick introduced himself to several New York newspapers and eventually sold it to the one offering the highest fee, Look-magazine. When Kubrick left high school, he had a weekly assignment from Look in his pocket worth fifty dollars and photographed all topics for the magazine that promised readership. Magazines like Look orLIFE stimulated a genuine hunger in American society for new pictures and stories. While LIFE committed itself to the American century, Look picked up the background stories, often linked to New York. Kubrick was staff photographer at Look between 1946 and 1950, and around 27,000 photographs came from this assignment, of which about 1,000 were published. The apprenticeship years at Look enabled Kubrick to indulge in his passion of creating and narrating scenarios with visual stories and perfect them step by step. The decision not to remain a photographer seems a logical consequence in retrospect, and he made his first (documentary) film in 1951 – Day of the Fight, conceived around the boxer Walter Cartier, which he had photographed for Look as well. 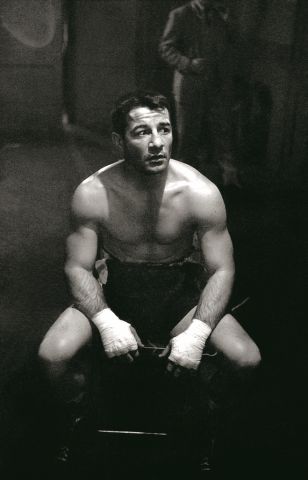 In the Look photo reports – more than fifteen are being shown in the exhibition – Kubrick, as later in his films, opts for an out-of-the-ordinary, often lonely human story: he watches a shoe-shine boy on the streets of New York, accompanies a giant circus with acrobats and animals on tour, or visits Betsy von Fürstenberg, an aspiring young actress from the high society. Kubrick’s photographs testify to a great narrative potential and indeed psychological interest, usually with one protagonist who is clearly at the centre of the action. Kubrick also documented American daily life in the great city, the Big Apple. During these years, when Europe was lying in a heap of rubble and ashes, New York had once and for all become the “new capital of the world”. He captures the metropolitan spectacle in great and small: individual stories and destinies combine into a “big picture” narrative of the city. While studies on Kubrick based on his films are extensive, very few of Kubrick’s photographs have been published as yet.

The exhibition catalogue, published by Verlag Moderner Kunst Nürnberg, not only accomplishes distinguished ground research in connection with Kubricks early photographic work but also shows a selection of photographs next to the layouts of Look-magazine for the first time. The exhibition also present editions of Look-magazine in which Kubricks selected photo-essays originally appeared.

The exhibition is a cooperative project of the Bank Austria Kunstforum Wien with the Museum of the City of New York and GAmm Giunti, Florence.