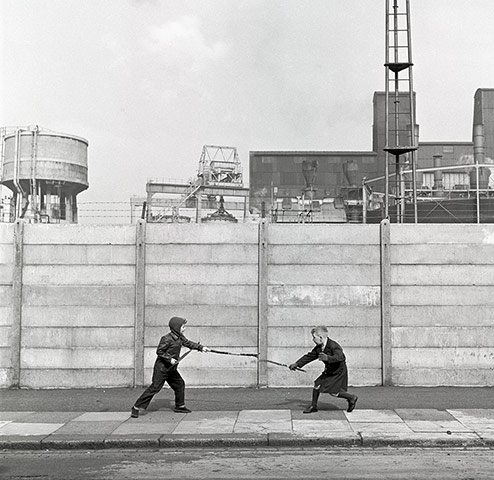 Until the 8th of July the Museum of London, in collaboration with London Street Photography will be displaying for the first time the compelling work by the unknown photographer Frederick James Wilfred (1925-2010).

Frederick Wilfred’s black & white images of the capital documents the daily lives of Londoners in the period soon after the  trauma of the war, revealing a society that slowly had to rebuild itself from the terrible effects of war. In 2011 the Museum of London acquired his vibrant archive of 134 street images of London, the Museum will be showcasing twelve prints showing shots of Twickenham Lido, street sweepers and new vendors, along with Battersea Power Station showing when it was in use. Wilfred was a professional photographer who specialised in portraiture but, from the late-1950s until the mid-1960s, he decided to make a series of documentary photos of London’s street life.

He served in a tank regiment in India during the war, and lived in and around Richmond, Twickenham and Teddington until his death in 2010. During the 1950s, Wilfred worked as Chief Photographer for Hawker Siddeley Aviation for whom he shot still images and Cinefilm of the early flying trials of the Hawker P1127 Kestrel (later renamed the Harrier). As well as flying in the extra English Electric Lightning aircraft in the RAF Formation Flying Team, to record a pilots eye view of their aerobatic programme – somehow incredibly enough managing to shoot using a 5×4 plate camera as well as Cinefilm and Leica stills while the aircraft was pulling High G manoeuvres.

Later on in his life, Wilfred owned a camera shop near Hampton Court and then in 1963 opened his own commercial and portrait studio in Hampton Hill, which he kept until his retirement in 1990. In 1985, he dropped the commercial side of his work to focus more on wedding and portraiture projects for which he won a number of awards.

Wilfred’s son Russell, who is an avid photographer himself, has undertaken the huge task of ordering and scanning his father’s vast archive, and so thanks to him the public is now able to enjoy these expressive and historic images.