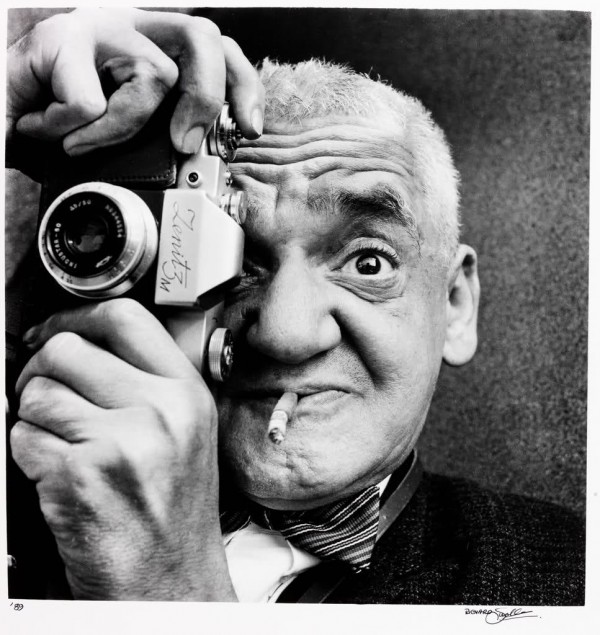 “Many photographers live in a dream world of beautiful backgrounds. It wouldn’t hurt them to get a taste of reality to wake them up. Anyone who looks for life can find it… and they don’t need to photograph ashcans. The average camera fan reminds me of Pollyanna, with a lollypop in one hand and a camera in the other. You can’t be a Nice Nelly and take news pictures.

So, keep your eyes open. If you see anything, take it. Remember – you’re as good as your last picture. One day you’re hero, the next day you’re a bum…”

Today marks one of the greatest tabloid photographers birthdays commonly known to everyone by the nickname as Weegee (Usher/Arthur Fellig). For an intense decade between 1935 and 1946, Weegee (1899–1968) was one of the most relentlessly inventive figures in American photography. His photographs are described as graphically dramatic and often lurid photographs of New York crimes and news events set the standard for what has become known as tabloid journalism. Freelancing for a variety of New York newspapers and photo agencies, and later working as a stringer for the short-lived liberal daily PM (1940–48), Weegee established a way of combining photographs and texts that was distinctly different from that promoted by other picture magazines, such as LIFE. Weegee also wrote extensively (including his autobiographical Naked City, which was published in 1945) and organized his own exhibitions at the Photo League.

As a photographer, Weegee is perhaps the truest, most perceptive, most cynical, and yet most blatantly sentimental chronicler of urban life in twentieth­-century New York. While forging his trade as a tabloid press photographer in the 1930s—a role that was then regarded as the catfish of the journalistic profession—he was able to establish a view on his city, that none else had been able to capture. His iconic pictures show an insider’s view of brutal crimes and accidents, engaging street kids and ethnic vendors, even tenement dwellers casually gazing out at the latest murder while reading the funny papers.

Weegee arrived from Austria in 1909, at the age of eleven, Usher Fellig was promptly rechristened Arthur Fellig. Raised in a Yiddish­-speaking household on the Lower East Side; his father was a peddler, hat salesman, and part-time religious teacher or rabbi. Young Arthur Fellig worked many jobs, including passport photographer, commercial photographer’s assistant, and finally darkroom assistant, or “squeegee boy” (hence, the nickname). In 1935, at the age of thirty­-six, he boldly quit his darkroom job to become a freelance photographer, then a new and uncertain profession. Quickly he became renowned for his nighttime shots of New York crime scenes, and he was profiled in various magazines under his adopted name, Weegee. A relentless self­promoter, Weegee was daring enough to declare “Murder is my business”—and to display the check receipt to prove it!

Weegee’s photographs were made to be printed in newspapers, as his goal was not to produce fine art prints or to exhibit his photographs framed on the wall of a gallery. As a freelance photographer at a time when New York City had at least twelve daily newspapers and when wire services were just beginning to handle photos, Weegee was challenged daily to capture unique images of newsworthy events and distribute them quickly. Working almost exclusively at night, setting out from his small apartment across from police headquarters when news of a fresh crime came through his police­band radio receiver. Surprisingly enough he would often arrive before the police themselves, he carefully cased each scene to create the best angle. Exploiting the garish lighting effects of the recently invented flashbulb, Weegee boldly illuminated the seamy underside of the nightitme city and captured instantaneously the startled expressions of his often distressed subjects. Murders, he claimed, were the easiest to photograph because the subjects never moved or became temperamental.

Weegee’s approach to photographing crime scenes was unique. Unlike police photographers or other photojournalists, he was most concerned with the human drama. He often used subtle juxtapositions or strange incongruities to illuminate the absurdity of certain deaths, such as the gangster trussed up in a too­-small trunk or a movie marquee in the background that reads “Joy of Living.” At the same time, Weegee was as interested in the raucous or stunned responses of spectators as in the motionless victims themselves. In the ICP’s exhibition, this gallery features an in­-depth view of several of Weegee’s most famous individual photographs, showing how they relate to other pictures he took and to pictures other photographers captured, and how editors utilized those images in the tabloid newspapers of the 1930s and 1940s.

The Photo League was an influential photographic organization established in 1933 as a forum for the teaching and promotion of politically engaged documentary photography. Most of the photographers involved with the League were native New Yorkers or immigrants like Weegee, who sought in their photographs to portray the working­class and ethnic neighborhoods they knew well. Their pictures showed an intimate street­ level view of Lower East Side tenements and Harlem sidewalks teaming with vendors and conversations. Looking away from the skyscrapers and swanky restaurants that typified Manhattan, the photographers of the Photo League documented impoverished enclaves of the Depression­era city in specific, quasi­sociological surveys, like the Harlem Document and the Pitt Street Project.

Though less academic and political, Weegee’s photography clearly fit the mold of the Photo League’s urban surveys. His comprehensive nighttime catalogue of lowlife New York included not only murder victims but also partiers and drunks, reckless drivers and rescue workers, firebugs and their prey, petty criminals and cops, and a whole lot of rubberneckers. In August and September 1941, Weegee installed two back­to­back exhibitions in the League’s headquarters on East 21st Street. In these shows he first began to associate his daily news photographs into categories and even brief photo essays, forms he would later develop in the newspaper PMand in his book Naked City.

Weegee’s view of urban life was governed by his occupation: daily newspapers demanded dramatic, newsworthy events. As a result, he often depicted the city as a seething and chaotic web of crime and violence. He exposed aspects of the city—even whole neighborhoods—that were strange and unfamiliar, except to those who lived there, and the eruptive events in his work seemed at times fearful and alienating. Yet, in his writing and photography for the liberal daily newspaper PM and in his brilliant editing and tough­talking captions for his 1945 photobook Naked City, Weegee gradually developed a more unique perspective on city life. Against the 1930s documentary conventions of social concern and activist reform, Weegee offered a more brutal realism that accepted life as it came and celebrated its carnivalesque variety.

Unhealthy habits, bad ecology and constant stress harm a male’s sexual drive. It is almost impossible to solve the problem once and for all. However, you can overcome its symptoms. To do this, you should buy Viagra at https://sildenafilhealth.com. The active substance allows you to increase blood flow to the penis, thereby causing a more stable and prolonged erection.

This exhibition, which runs until September the 2nd, draws upon the extensive Weegee Archive at ICP and includes environmental recreations of Weegee’s apartment and exhibitions. The exhibition was organized by ICP Chief Curator Brian Wallis, which was made possible with support from the ICP Exhibitions Committee, The David Berg Foundation, an Anonymous donor, and with public funds from the New York City Department of Cultural Affairs in partnership with the City Council.