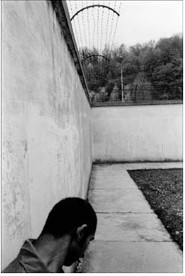 Entre Parenthèses is a series of photographs by Klavdij Sluban, the Slovenian born French photographer whose fascinating body of work continues to be met with critical acclaim. Published by Actes Sud in the affordable Photo Poche series, the collection of photographs is centered around the photographer’s visits to youth detention facilities in France and across eastern Europe where he gives photography workshops to inmates.

Make sure you check the rest of the post!

Intrinsic to the success of Sluban’s photographs is the approach he takes when making them. Over a number of years, the photographer travelled to various youth prisons with the aim of teaching the inmates about the photographic process from loading film to making prints. Speaking several languages, he was able to carry out these workshops in France, Russia, Slovenia, Georgia and a number of other places in eastern Europe. While facilities in each of the prisons varied, the workshops always involved inmates who had volunteered, and were restricted to film photography. In this way, Sluban was able to make his pictures in an environment of exchange, and just as the inmates allowed themselves to be photographed, so too did they have to opportunity to take photographs in return.

Although the series was made in prisons, the images in Entre Parenthèses (In Brackets in English) avoid the cynical, sensationalist approach that many photographers take when documenting subjects they feel to be brutal, or hard hitting. The inmates are shown sensitively and it is unlikely that Sluban could have produced many of the images without first gaining the trust of his subjects. He works discreetly, remarking in one interview that his camera bag only contains one Leica and some rolls of film. As a result, this set of black and white photographs gives us an unusually intimate insight into a reality that usually remains hidden.

The photographs in the series display exceptional technical ability but the photographer avoids falling into aesthetic self-indulgence. In context, Sluban knows that his position is one of privilege and puts his skill in the service of the wider ambitions he has for the project. Confronted with a bleak, impersonal and strictly controlled environment, the photographer strives to demonstrate the distinct characters of each of the inmates while suggesting that such conditions make the construction of personal identity very difficult. In effect, Sluban’s pictures attempt to reach individuals outside of their immediate context. It is with this goal in mind that the photographer’s technical skill becomes most interesting. The images show a profound understanding of what can be achieved with black and white photography. Complimenting their subject matter, many of the photographs use silhouette and a strong contrast between light and dark to give an insight into an environment that swings between equally stark extremes. Faces and objects are picked out and hidden away, emerging from surroundings that are featureless and de-humanised. The power that surfaces from the photographer’s understanding of light is that of suggestion. In an environment dominated by regulation, the suggestion of what happens on a private and personal level, outside of this context, is extremely compelling.

However, just as Sluban is able to produce strongly contrasting images, perhaps the most interesting quality to many of the pictures in the series is that of tone. Not shying away from grain, a number of the images, especially the portraits, show exceptional variation of shades. This understanding of tone is paired with other techniques such as soft focusing, resulting in portraits that are remarkably sensitive, clearly emphasizing the vulnerability of these incarcerated young people and counteracting the hardness of their surroundings. From groups of shaven headed young men emerge individual faces and expressions, etched out of their backgrounds with delicate variations in tone. Each time, we are challenged to confront what we are seeing, and to strive to understand the people staring out at us as opposed to judging or dismissing them. It is this challenge to the viewer that makes the pictures so affecting – they demand a personal response.

In Entre Parenthèses, Klavdij Sluban has undertaken a project of considerable ambition and insight. Acknowledging the exploitative nature of certain types of photography, he has aimed to explore an important issue through the medium while simultaneously offering it to those he uses as subject matter. His photographs describe the difficult circumstances faced by these young people and their individual struggles for identity, escape and innumerable other feelings that doubtlessly come with incarceration at a young age. However, he does not ignore his own responsibility as voyeur, and does not enter, photograph and retreat. Instead, by giving the inmates the opportunity to photograph themselves in their own surroundings, he offers them the opportunity to participate in his own creative process. In a standardised environment that inhibits individuality, this opportunity is a profound one, allowing these young people to assert themselves and acknowledge their own importance as autonomous individuals, capable of choosing and designing their own realities. The construction of a unique identity is important to all of us, crucially so when we are young. Just as each of Sluban’s photographs is unique, so too will be the work of each of the inmates, a personal and creative step in the formation of identity in the most difficult of circumstances. It is this insight that makes this project so important, to both the viewer and those involved in it, and finally, to photography.