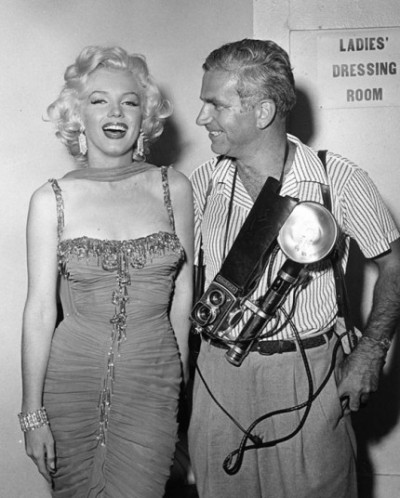 Monday to Sunday: 10am till 7pm

On the 1st of August Proud Chelsea launched an exclusive exhibition from world-famous glamour photographer, Bruno Bernard: who is professionally known as the legendary “Bernard of Hollywood”. Bruno photographed Hollywood’s biggest and brightest stars, but is best known for “discovering” sex-symbol Marilyn Monroe. Based on the book Marilyn: Intimate Exposures by Susan Bernard – a celebrity in her own right – this collection documents the transformation of fresh-faced and bright-eyed Norma Jean, into glamorous Marilyn Monroe with the “Pillow Case White” hair.

In 1946 Monroe first met Bruno Bernard as he was leaving a dentist appointment: Bernard invited the future actress for a “strictly professional” photo shoot and the rest is photographic and cinematic history. First a pin-up model, the 50s beauty later became a world-famous actress staring in films such as “Gentlemen Prefer Blondes”, “Some Like It Hot” and “How To Marry A Millionaire”. The star would later comment: “Remember, Bernie, you started it all.”

This exceptional display of Marilyn’s life runs through her early pin-up photographs, candid snaps from glamorous Hollywood parties and rare behind the scenes shots from some of the bombshell’s most famous motion pictures. A captivating headshot of Norma Jean in a beret and sweater; a giggling Monroe on the set of “The Seven Year Itch”; a tearful star escaping a throng of journalists following her divorce from Joe DiMaggio: Marilyn: Intimate Exposures is Bernard’s portrait of a luminous yet fragile woman whose Cinderella story captivated and wooed the world.

Bruno Bernard, professionally known as Bernard of Hollywood, was a renowned glamour photographer of Hollywood’s golden era. He has been called “The King of Hollywood glamour”, “The Vargas of Photography” and – most memorably – the “discoverer” of Marilyn Monroe.

Bruno Bernard was born in Sommerfeld, Berlin, in 1912. By the young age of just 11 he became hooked on photography, when his parents gave him his first Rolleiflex camera. As a young man he studied for a Ph.D. in criminal psychology at Kiel University. However, his participation in Jewish youth organizations landed him on the Gestapo’s blacklist; causing Bernard to immigrate to the United States in 1937. His first studio there, opened in 1942 on the Sunset strip, which has become a famous Hollywood landmark.

Bruno Bernard was the first still photographer to be honoured by the Academy of Motion Picture Arts & Sciences in 1984 with an honorary exhibition. He has photographed Hollywood luminaries such as Clark Gable, Ginger Rogers, John Wayne, Rita Hayworth, Elvis Presley, Cary Grant, Sophia Loren, Anita Ekberg and Elizabeth Taylor.

In 1987 sadly Bruno Bernard died at the age of 75 but his historical work still lives on through his daughter Susan Bernard and grandson, writer and actor, Joshua Miller.