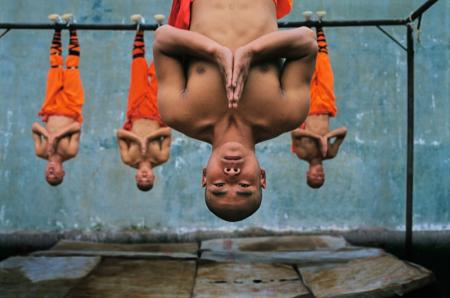 One of London’s foremost photography galleries, Chris Beetles Fine Photographs, are exhibiting a major exhibition of work by Steve McCurry, one of the most influential and well known photographers alive today. McCurry has created a huge archive of memorable and iconic work, he has really stood out as a photographer, making photojournalism his own through his singular use of vivid colour photographs.

Steve McCurry was born in 1950, in Philadelphia, USA. In the late 1970s he came into the spotlight when he dressed himself in native clothing and went into Afghanistan just before the Russian invasion. The images he came back with, which were smuggled out by sewing the film into his clothes, were the first to show the conflict and were published worldwide. As a result of his quality of the work and his bravery, he was awarded the Robert Capa Gold Medal for Best Photographic Reporting from abroad requiring exceptional courage. Since this life-changing moment, McCurry has worked constantly, travelling the world to cover the human consequences of war, from Iraq to Cambodia. Yet, McCurry is not a war photographer his work is much broader, he has deep interest in people, and his curiosity at the beauty of our planet, continues to drive him as a photographer of the human condition.

McCurry’s ability to capture ‘the decisive moment’ has made him sought after by many international publications. One particular cover on the ‘National Geographic Magazine’ has become perhaps the world’s most recognisable photograph of his entitled ‘Afghan Girl’, a portrait of an unidentified refugee taken in 1984. Her haunting beauty with her piercing green eyes and red headscarf transfixed readers worldwide, bringing the plight of her and her fellow refugees to international attention. The image has since graced the covers of countless books, magazines and posters. In 2002, McCurry and a team from National Geographic revisited Afghanistan and identified the girl who had never seen the photograph. If you would like to watch a short 15 minute clip from his trip to identify the ‘Afghan Girl’, please click here.

McCurry’s has found inspiration and wonder in many places, forming richly-coloured images that engages his viewers into his images. However, nowhere has provided him with so much material as South Asia, a place McCurry has visited over 70 times. In particular, Chris Beetles Fine Photographs exhibition will feature a large number of his vibrant and captivating images from the Holi Festival in Rajasthan to the monsoon rains that engulf Calcutta. Also featured will be McCurry’s images of Cambodia, the Philippines, Pakistan, Tibet, Nepal, Bhutan, Kuwait, Cuba and many other countries that have caught his constantly inquiring eye.

This is a truly stunning retrospective of work that you do not want to miss!