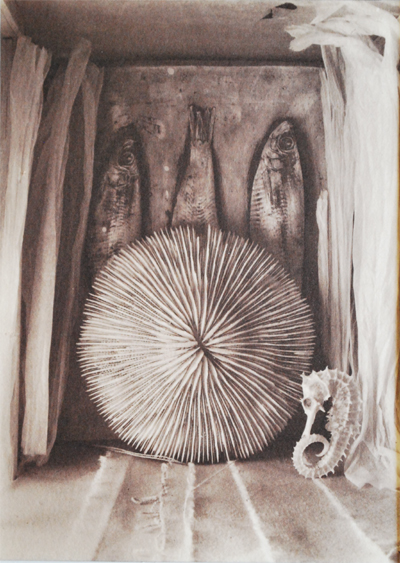 Opening Times: Wednesday – Saturday 11am – 4pm or by appointment

We are pleased to announce that from the 15th of September the Lucy Bell Gallery will be displaying a number of exquisite Saltprints by photographer Bruce Rae. Lucy Bell will also be presenting the first exhibition of the book “Tableaux Whispers Echoes”, based around Bruce Rae’s delicate salt prints with text by Terry Jones together with recensions by the painter Tom Phillips. (The book is published by Chris Dickie/Picture Box Media.)

From 1963 till 1964 Bruce Rae trained as a photographer at Birmingham college of Art which followed, in the early 70’s, with Rae attending the Royal Collage of Art; after which he sought commercial work. He went into artistic photography by mistake whilst teaching himself to use a light meter; using flowers as a subject, after which he spent a number of  his early years producing black and white images of flowers.

Rae over a number of years has been using a variety of nineteenth century photographic processes since the early 1990’s. As well as using these historic processes he mixes together all his own chemicals, as he is suspicious of digital technology and the kind of manufactured silver gelatin papers he favoured died out by the start of the twentieth century, which left him no choice but to coat his own paper.

The salt printing process enables him to continue working in a way that complements his personal aesthetic. His five inch by four inch salt prints are “masterpieces in miniature.” Robin Muir, when he was Vogue’s picture librarian said of Rae’s salt prints “this early Victorian process, all but banished into history, has it’s roots in the earliest days of photography. A difficult process to master, Rae’s pursuit of perfection allows for a low success rate, only a quarter of the prints that he produces will convince him to sign them and add  to his editions. The most obvious manifestation of the print making art, apart from the rich tones, is a sparkling texture, a subtle, barely perceptible gleaming, quite in sympathy with the photographer’s own brooding sensibility, enlivened nonetheless with a twinkling good humour.”

For this work, Rae says “ I built a frame out of balsa wood, covered it in tissue and rendered it translucent with aero modeller’s “dope”. This box I hung with guaze and crumpled tissue paper. This set I filled with a cast of moths and butterflies, seahorses and shells. Sixty watt bulbs lit  the top and sides; then all at once I had my very own Magic  Theatre! Viewed through the back of an ageing wooden Kodak. I had become a puppeteer, but as yet without a script.”

Rae soon found his script in the voice of Terry Jones (Monty Python). The pictures went to stay with Jones on several occasions until he could “hear the words that the photographs were whispering. I found that if I sat with my mind perfectly open, and I watched each tableaux in turn, it would begin to reveal itself to me and I would hear the words that the photographs were whispering. They were indeed telling a story. I had no idea whether it would have a beginning or a middle or an end, but they were definitely telling me about themselves and I just had to write them down as I heard from them.”

It was then that the artist Tom Phillips produced the intriguing recensions of the text – the echoes of the whispers of the tableaux with which the triptych began.

Bruce Rae has exhibited widely including Michael Hoppen Gallery, Peter Fetterman Gallery and Arden and Anstruther. His work has also been bought by many important collections including the V&A, Biblioteque National de Paris, Ralf Lauren and Paul Smith. This beautiful body of work formed the book “Tableaux Whispers Echoes”, which is now available as a hard back limited edition copy for £75 from the gallery. Salt prints, editioned to 10 are available for £350.