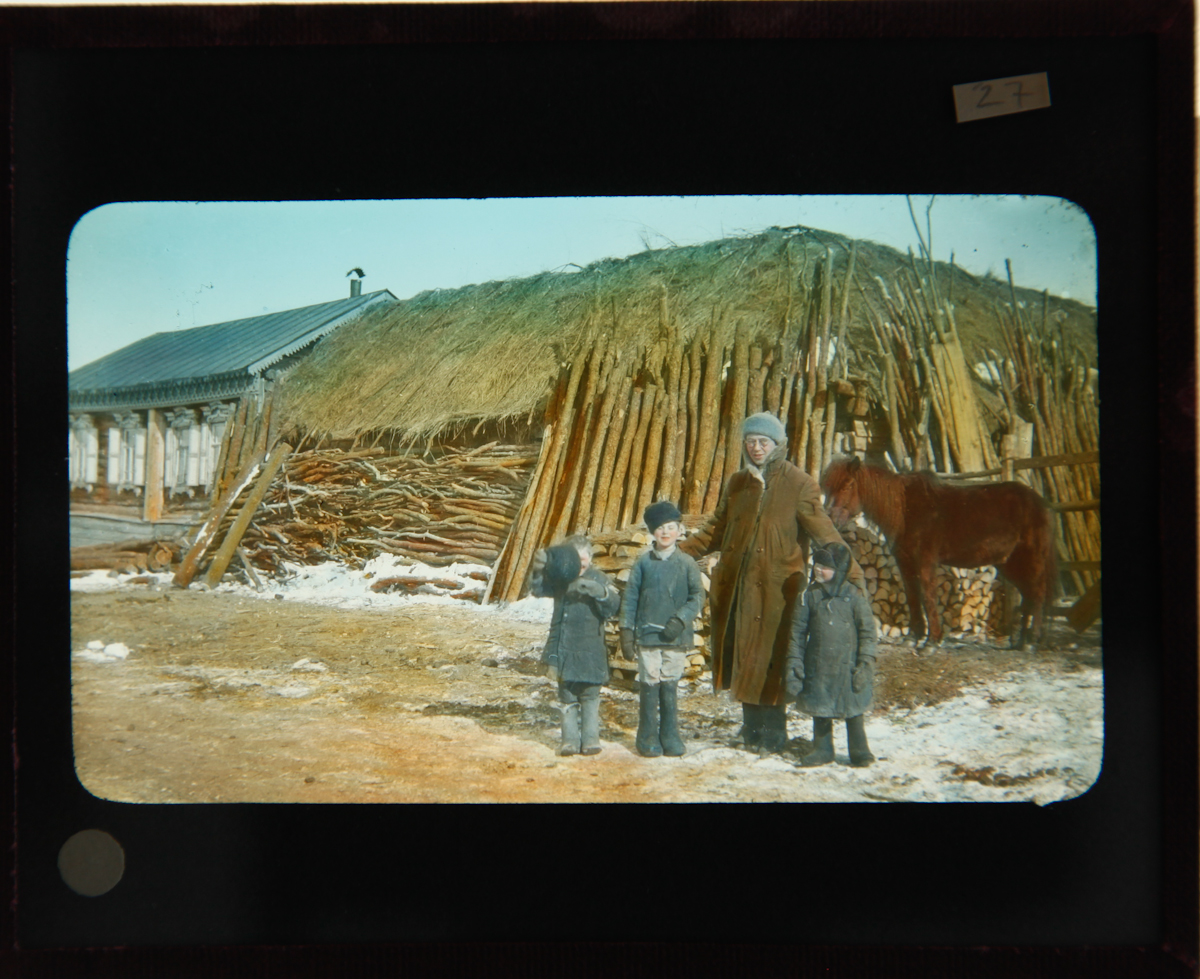 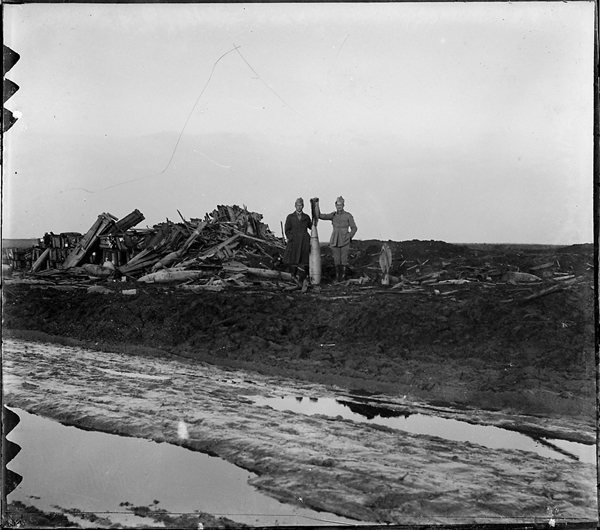 At the beginning of the year Anton Orlov (creator of The Photo Palace Bus) stumbled upon an amazing discovery, he uncovered from an old camera (a French stereoscopic camera called Jumelle Bellieni shown below) that he brought at an Antique shop, where he unearthed unseen World War I French glass plates! If that wasn’t enough, a few days later Anton posted on his blog a beautiful collection of photographs from the Russian Revolution, 1917, that he discovered in 2005, to be the work of photographer John Wells Rahill.

Here is the story behind the unusual discovery of these historical photographs:

“A friend of mine alerted me about the existence of an antique store in LA that recently purchased a large estate of old photographic equipment.  Naturally my curiosity was peaked and I drove up 100 miles to see what I can find.  From among dozens of weird old cameras that I saw on my first visit one in particular was staring at me from behind the glass of a display case and I knew I had to get it.  It was a stereo camera made by Jumelle Bellieni ca. 1901. I recognized it from collectors books that I have spent some time reading back in the days when I worked in a camera store and there were not too many customers.  It had the original case and the lenses seemed OK, there were a few pieces missing, but I figured that for $100 it’s a fair deal.

When I brought it home I was anxious to clean the many layers of dust off of it and started carefully to do through all the crevasses.  After I got the leather cleaned on the outside my attention turned to wondering what do the insides look like and I started to try to figure out where the latch may be that could open the back.  It took me a few minutes to realize that it’s a simple slide back with no lock at all.  When I slid open the rear door the plates with springs on them, which hold the glass plate negatives in place, popped out at me with a rather fierce force.  Under them were 12 metal holders and 8 of them still contained the original glass plates.  Imagine the level of my surprise when I saw that those plates were ALREADY DEVELOPED!  When I pulled the plates out of their holders I saw in front of me very silvered negatives and it was hard to make out the images on most of them aside from the one with a ruined building in the river.  I was pretty blown away to see developed images come out of a 100+ year old camera and indeed that would have been surprising to find in a camera of any age.

It did take me couple of days to get to the scanner and convert the images to positives using Photoshop.  It was only then that I understood that I was looking at WWI photographs taken somewhere in France.  This was yet another moment when I had goosebumps – I realized that I was looking at photographs that likely have never been seen before.  As this was a pretty unusual find I immediately decided to put that find on my blog for the world to see.

I returned from yet another trip to that store where I picked up another Jumelle stereo camera.  Judging by the weight of its back I think there are glass plates in there as well and I can not wait to go to the darkroom and develop them.  This time I am going to be a lot more careful and am not planning on opening the back out of fear that I may not get so lucky and the images will be ruined by light. 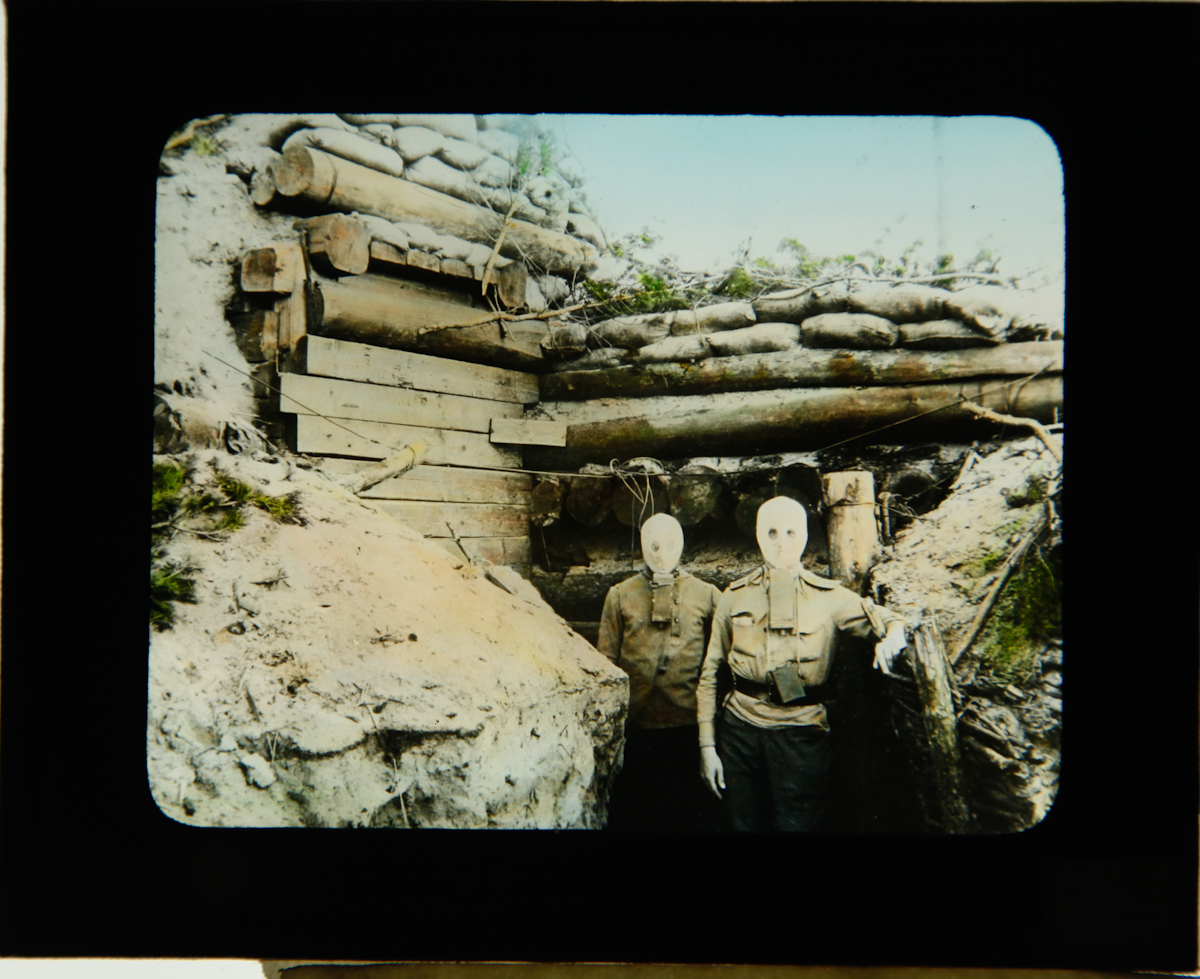 “In 2005 I was asked to come by a Northern California home to help translate and identify some mystery images. I love old photos, so I was eager to help. All I knew when I was on my way up there was that they were from Russia and really old.

When I arrived at the house in Northern California I saw in front of me a number of very old wooden storage boxes and one more much larger black carrying case.  The owner told me that inside were pictures taken by her grandfather.  She opened one of the boxes and pulled out a glass slide about 3x4in. I must admit I did not know the term ‘Magic Lantern Slide’ back then and did not immediately realize what I was looking at. But there were hundreds of images from snow-covered villages, train tracks, bullet-riddled buildings, soldiers in trenches, soldiers by houses, soldiers on trains….  Lots of soldiers.  There were also lots of pictures from China and Japan mixed in among them. The slides were also exquisitely colored by hand and the colors have been preserved wonderfully. I finally tore myself away from the images to ask what I was looking at.
This is what I got as the answer.  Also included in this tale is a lot of information that I was able to research since that meeting:

The name of the photographer was John Wells Rahill, a pastor who graduated from Yale University in 1906.  He had a strong interest in Russian history and culture.  His topic of study at Yale, as mentioned in a small article about his graduation, was “Contribution of Christianity to Socialism”.  As it so happens John was also an avid photographer and used a Kodak Jr. #1 roll film camera.

In the winter of 1917 John heard about the first Russian revolution and was determined to go to that far-off land and experience the changes for himself.  In the summer of 1917 John joined the American branch of the YMCA, in particular the War Works Division.  During the first World War YMCA was vary active behind the scenes helping the armies of both sides in that terrible conflict by providing things like rest and relaxation activities, overseeing troop repatriation and other logistics.

On the service card, which I was able to locate at the YMCA Kautz Family archives in Minneapolis, the date of his departure for Russia is stated as October 7th 1917 – the very same day of the big final push in the Communist Revolution.  He was sent to work with the troops of the Western Front of Russia.  He set up a facility the YMCA called ‘Soldiers House’ in the back of the front lines in a village (now a small town) of Valk.  Today the town carries the name Valga and lies split in half by the border of Estonia and Latvia.  There he was given an old school building inside of which he arranged for a reading room, game room, kitchen and other facilities to help the soldiers during their time away from the fighting.

John spent only a few months working in Valk when the turmoil of the revolution and the conflict with the new government has forced the removal of most of YMCA staff from Russia.  It is known that due to heavy fighting in Europe it was deemed that the safest route for their evacuation was determined as being via Trans-Siberian and then through China and Japan. John returned to the United States in the spring of 1918.

All along during his fascinating trip he took plenty of photographs with his trusty Kodak. Upon his return John had the best of his images converted into Magic Lantern Slides because he was interested in sharing his experience and the plight of the Russian people with the world.  As it so happens he also visited Moscow and there purchased more than 50 slides there from a professional studio. He even had the idea of finding the same buildings that were featured in those slides and re-photographing them himself.  He also bought some professional slides in Japan and again went to the same places and made his own exposures there.

Upon his return John began a long career as a pastor and was known to give lectures on the work of the YMCA during the First World War. It appears that those who worked in Russia were soon blacklisted and labeled as ‘socialist sympathizers’.  So by the middle of 1920s John packed his collection of over 500 glass slides along with the black and white proof prints, lecture cards and the slide projector into a metal chest in the basement of his house.  And so the first part of the life of this incredible collection came to an end.

It was not until the passing of his daughter that the contents of that chest were found by his granddaughter.  After I saw those images in 2005 I became very intrigued by them and wanted to see them preserved well and presented to the world.  Six years passed and in 2011 I purchased the slides.  Here you can see the short video about the collection, which I made after doing some preservation work.

My goal now is to go back to Russia in 2017 and travel along the path taken by John to re-photograph the same locations 100 years after him and make a new set of Magic Lantern slides to be preserved for posterity.

Some readers may ask why would I want to make lantern slides, so I feel compelled to explain my reasoning.  I have a deep love toward analog photography and historic authenticity of images as artifacts.  When properly exectuted, gelatin silver images printed on glass plates are extremely stable and that is evidenced by the remarkable condition of this 100 year old collection. I believe that with good care they will be viewable in another two hundred years. I am also inspired by the compelling beauty of a projected Magic Lantern slide.  A very special bonding experience is shared by the viewers during such a show and I would like to perpetuate this tradition. I am not at all opposed to eventually scanning and making both sets available for world-wide viewing.  I would just like to make a Magic Lantern slides from the re-photographing trip to compliment the craftsmanship, history and tradition of the original set.”