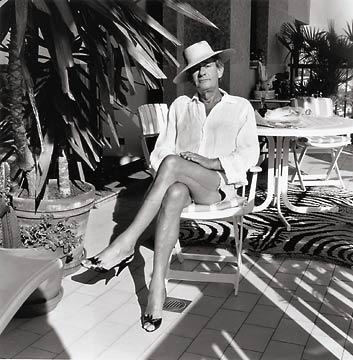 ‘My job as a portrait photographer is to seduce, amuse and entertain’

Helmut Newton, was and still is known world wide for his controversial and influential work of mainly women in sexual poses; some were applaed by his outragoures and daring images, but others loved him, ‘people would come knocking on his door for a photograph’, charging almost £10,000 for a photo, as at the time his work was in such a high demand. Newton was a “prolific, widely imitated fashion photographer whose provocative, erotically charged black-and-white photos were a mainstay of Vogue and other publications.”

Grown up as a German Jew whose family were ruined by the Nazis, his life started off exciting and terrifying. Having had a privileged childhood in Berlin, he bought his first camera at the age of just 12 and was hooked ever since. Newton became an apprentice to Yva (Elsie Neulander Simon), a noted fashion photographer, who Newton learnt his craft off, all the while dreaming of becoming a photographer for Vogue. But once the Nuremberg Laws were passed, coupled with the horrors of Kristallnacht, his family fled. Young Helmut went to Singapore; while his parents sailed to South America. Newton was sent to Australia by British authorities while in Singapore, and arrived in Sydney on September 27, 1940. After the war in 1945, he became an Australian citizen and changed his name to Newton in 1946. Two years later he proposed to his wife, called June Browne, who also later became a fellow photographer in the name of Alice Springs, named after the central Australian town. Before their marriage he always warned her that: “My work will always come first.”

Four years later he had his first solo exhibition in paris entitled ‘Big Nudes‘, a series of huge portraits of glossy, larger-than-life women, shot against a white backdrop, which was one of the most remarkable projects of that time. By 1976, he had published ‘White Women’, a controversial book that established him as the ‘agent provocateur’ of fashion photography. His work was so distinct that they became a Vogue hallmark, a magazine that he made his own for a quarter of a century. Newton’s images depicting women in men’s clothing as powerful figures, breaking all the moulds of how to pose a women, made heads turn. Even with all the controversy, he continued pushing in new directions of photographing women, by taking images of nude bodies in provocative positions. It may have been met by scrutiny and rage in the beginning, but it eventually became the industry standard. His unconventional images of dangerously seductive woman made Helmut Newton a legend in fashion photography. Newton did not just limit his photography to nude women and fashion, he also shared his early life as a survivor of the Nazi invasion in Germany.Taking portraits of Nazi personalities and other people relevant to that very difficult time in history. Helmut Newton images clearly show the world through his eyes not changing or adjusting his style for anyone and most importantly not giving a care to people’s judgments. On January 23rd, 2004 Newton died due to a tragic car accident in California. The 83 year old photographer crashed into the wall beyond the Hotel Chateau Marmont’s driveway in Hollywood.

Currently at the Helmut Newton Foundation in Berlin there is exhibition showing Newton’s remarkable polaroids until May 2012. To find out more please click Here. Below is fascinating 90 minute documentary about Newton; the camera crew follow him on his assignments, showing his process of how he works with women and how he postions them in such a meticulously way, he even touches on his relationship with his printer. Some small parts of this documentary called ‘Frame from the edge’ are in French and German, unfortunately there are no subtitles. Also below is another great and intimate documentary about the ‘King of Kink’ all shot by his wife June entitled ‘Helmut by June’.