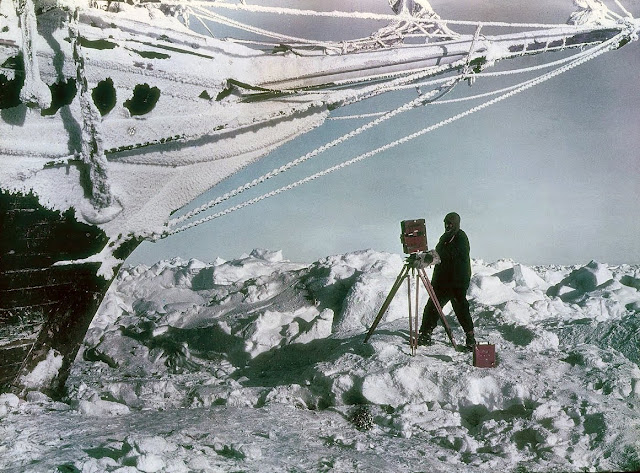 In this fascinating and revealing BBC documentary, shows an in-depth look into the iconic work by Frank Hurley and how he came to create his remarkable and historical photographs, but through the documentary it is revealed that some of these mesmerising photographs were fakes, so was Hurley a ‘master photographer’ or just a magician in the darkroom?

Frank Hurley, was a husky, curly-haired Australian, who at the mere age of 14 ran away from home and went to work on the Sydney docks. He was tough and could curse as well as a man twice his age, yet he had an artistic side that appeared early in his rough life.

Hurley was a quick leaner and was able to teach himself the technical aspects of photography, using his precise eye to create landscapes, which in turn gave him the opportunity to create a small postcard business. In 1910, at the age of 25, he saw a chance to link photography with adventure: Australian explorer Douglas Mawson was planning an expedition to Antarctica. Hurley managed to corner Mawson in a private railway compartment and spoke his way into the job of the expedition photographer.

Antarctica, the continent which was unknown, allured adventurous men of the time, forming a golden age of polar exploration. Expedition photographers were extremely important, not only because they could document the event but also because the sale of rights to photos and movies helped to finance the exploration.

Hurley took documenting the expedition to a whole new level of photography. His images did not just capture the explorers posing in the snow but instead, he often focused on the snow itself, or on the eerie never ending snowscapes that became beautiful through his careful thought provoking compositions.

In 1917 Frank Hurley became the first official photographer to the Australian Imperial Forces. When he arrived at the Western Front his rank was honorary captain, but the troops, seeing how he took risks to get his pictures, nicknamed him as “the mad photographer”.

Hurley was an exceptional photographer, who had already earned himself quite a reputation as an tough adventurer, when he took part in the Endurance Trans-Antarctic Expedition led by explorer Sir Ernest Shackleton. Lionel Greenstreet, First Officer of the Endurance, said of him: “Hurley is a warrior with his camera. He would go anywhere or do anything to get a picture.”  A brilliant technician, extraordinarily brave and a man who would stop at nothing to get his perfect frame. Hurley even plunged into the freezing waters of the Antarctic, as their ship was sinking, to retrieve some of his negatives, which quickly became lost to the sea during his trip with Shackleton.

Hurley was also a strong defender of pictorialism – the idea that photographs should express ideas, tell stories and excite emotions in much the same way as paintings did, this lead him to finally begin to manipulate war pictures. Some of his most famous battle scenes are in fact composites of several negatives, which has affected his standing as a documentary photographer. Hurley’s frustration at risking his life continually to get pictures that did not fully represent the scenes that he saw led him to the highly controversial practice of montaging his photographs to create composite battle scenes.

Frank Hurley was fearless and innovative, with a remarkable character, who went to extreme lengths to create that ‘perfect’ photograph, even if it meant risking his own life to save his photography.