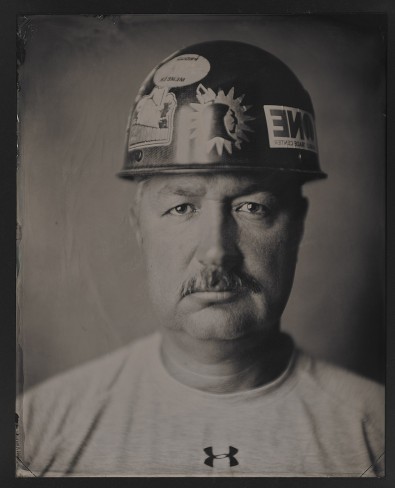 The Monhawk Indians of Quebec ironworkers, have been travelling to New York City for more than a century, to contribute in creating one of the world’s most iconic skylines. To follow in this tradition a new generation of Mohawk ironworkers have now descended upon the World Trade Center site, helping to shape the most distinct feature of Lower Manhattan—the same iconic structure their fathers and grandfathers helped erect 40 years ago and later dismantled after it was destroyed in 2001.

One year ago Melissa Cacciola, a striking Tintype Photographer decided to document these fascinating men, around the tenth anniversary of the September 11th attacks. This was no easy task for Cacciola, given that the roughly 200 Mohawks (of more than 2,000 iron workers on site) are working at a frantic pace, to help One World Trade Center to rise a floor a week!

Cacciola, has an interesting background in chemistry and historic preservation, and is one of few photographers who work exclusively with tintypes. In interview she had with TIME she told them, “It seemed like a real New York thing. And it made sense as the next chapter in the post-9/11 landscape. Rebuilding is part of that story.”

‘Just as towers like the Empire State Building and Rockefeller Center mark the height of America’s skyscraper architecture, tintype photographs are inherently American. Tintype developed in the 1850s as early American photographers looked for alternatives to the expensive and finicky glass-plate processes popular in Europe. Recycled tin was a readily available resource in the new nation—less than 100 years old—and so the tintype grew in popularity, earning its place in American photographic identity. Even Abraham Lincoln’s campaign pins contained an inlaid tintype portrait of the candidate.’ (TIME)

“You don’t find tintypes on other continents,” Cacciola said.

Cacciola has managed to create 30 timeless tintypes in the series, which are all made each from bulk sheets of tin, although she  has also used recycled biscuit jars in prior tintype projects. The process starts off with coating a black lacquer to the tin and then a layer of collodion emulsion to make them light sensitive, the plates are immersed in a silver bath immediately before exposure to form silver iodide—this is a crucial step, that bonds actual particles of silver to the emulsion. ‘Nothing could be more fitting for men working with steel to be photographed on metal.'(TIME)

She said to TIME: “These tintypes are so much a part of me, like the fact that you get partial fingerprints or artifacts from the way I’m pouring collodion on the plate—it’s all human. The way silver and light interact in this chemical reaction is a testament to the Mohawk iron workers and this early [photographic] process—it’s unparalleled in terms of portraiture.”